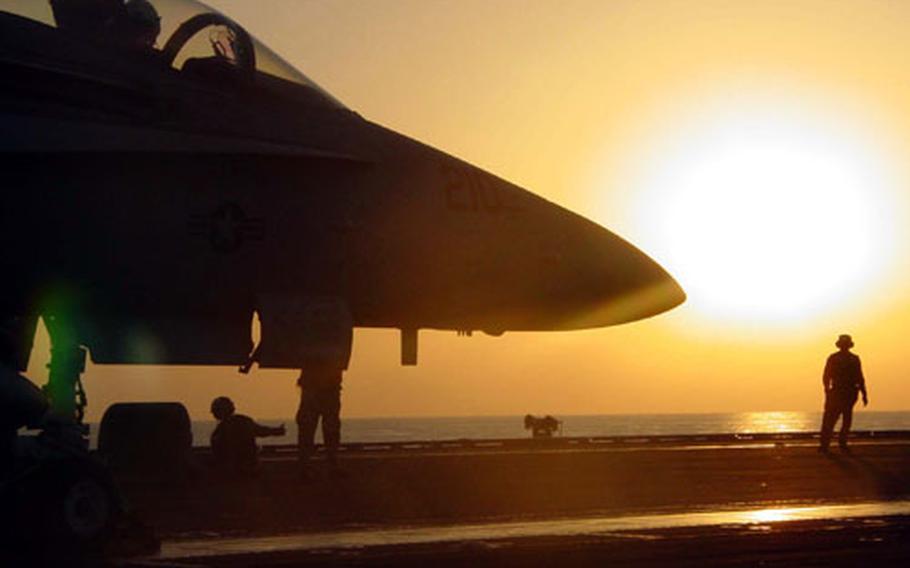 An F/A-18 Hornet aboard the USS Enterprise prepares to take off just before sunset in the Gulf of Oman. While a new Navy strategy calls for more humanitarian assistance missions, the aircraft carrier still provides a lethal punch from anywhere there is deep water. (Scott Schonauer / S&S)

ABOARD THE USS ENTERPRISE &#8212; Even when standing beyond the yellow safety stripe, seeing a jet catapulting off an aircraft carrier up close is a little scary.

You don&#8217;t just see it, you feel it. A roaring F/A-18 Hornet blasting off the deck rattles teeth and rumbles internal organs. Before the next jet blasts off, muscles tighten and the &#8220;Air Boss&#8221; gives sweaty sailors on the flight deck his patented rallying call.

A new Navy strategy might call for more security cooperation and humanitarian missions, but the aircraft carrier USS Enterprise&#8217;s presence in the Persian Gulf offers the potentially lethal punch that the Pentagon can deliver quickly.

Sure, but that&#8217;s not the whole story of the &#8220;Big E.&#8221; No matter what type of strategy paper the Navy releases, the main mission of carriers like the Enterprise remains the same: Be able to deliver air power in a hurry.

If the U.S. decided to launch an attack against alleged Iranian nuclear facilities or a terrorist hideout, more than likely it would come from fighters launched from carriers. While much of the American public&#8217;s attention has been on the Marines and soldiers in Iraq, aircraft carriers like the Enterprise could make the front pages in a moment&#8217;s notice.

Make friends, carry a big stickIn October, the Navy released a document called &#8220;A Cooperative Strategy for the 21st Century Seapower.&#8221; The paper calls for greater coordination among the Navy, Marine Corps and Coast Guard and forging relationship with other countries to help fight terrorism, protect international commerce and provide humanitarian aid.

The carrier is being asked to do all of those things, including help provide maritime security, in places such as the Middle East. But the huge ship packed with fighter jets also is serving as a deterrent in a region known for its instability and oil reserves.

American warships have been in the Persian Gulf and Middle East region for six decades, and that is not likely to change.

The Enterprise is the only aircraft carrier at the moment, but earlier this year the Pentagon sent two carriers to the gulf as a show of force in Iran&#8217;s backyard.

Sailors on board could be asked to do numerous missions that fit into a strategy aimed at building coalitions. While they help launch planes almost daily, some days they could be asked to be a tour guide for a visiting dignitary. The Enterprise has hosted Japanese and French diplomats on this tour.

Three weeks into its current deployment, the Enterprise and its group of ships have focused on helping police the waters in the region for piracy and terrorism. Planes also have been keeping track of Iranian ships.

Seconds matterThe Navy has launched jets from ships for decades, but sailors who work long hours on the dangerous flight deck try to do it ever faster and more efficiently. Flight crews that can dispatch a plane about every 35 seconds are considered pretty good.

On the Enterprise, sailors tried to beat a personal best of 26 seconds. A few seconds might not seem like a long time, but those responsible for getting the planes in the air see it differently.

As the officer in charge of the flight deck, Shoaf is responsible for nearly 1,000 people and 2.1 million gallons of fuel. Some have said he has a flair for using the radio. He is known for the &#8220;colorful&#8221; style and choice of words he uses to issue commands to those on the flight deck. It is intentional. He wants to get sailors&#8217; attention.

If crews launch a plane on time to the second, Shoaf will give his patented &#8220;money shot&#8221; call over the loudspeaker.

Shoaf has spent 23 years in the Navy, mostly as a pilot. This is the eighth deployment of his career, sixth to the Middle East and third in the last four years. He calls last year&#8217;s deployment the best because the Enterprise did so much, visiting numerous ports and helping deliver bombs in support of operations in Iraq. This tour is different.

But that can change in an instant.

Number of people: More than 5,000 officers and sailors

Number of compartments: More than 3,000