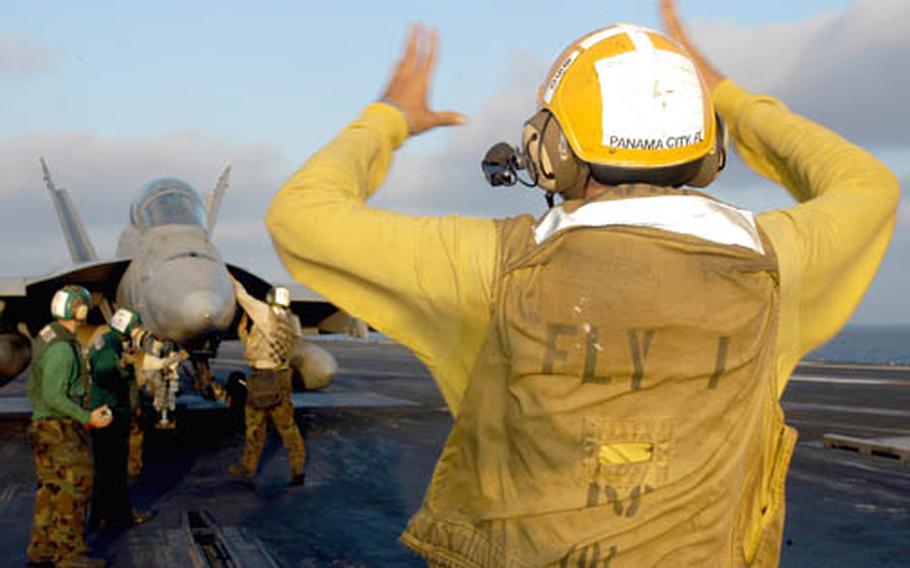 Airman Brian Kuhaneck, aircraft director on catapult 2 aboard the USS Enterprise, directs an F/A-18 Super Hornet getting ready to launch from the carrier on its way to Afghanistan. (Jennifer H. Svan / S&S)

Click here for more photos from the USS Enterprise.

ABOARD THE USS ENTERPRISE &#8212; The sound of war at sea is the rumble of jets catapulting off the USS Enterprise deck.

As the ferocity of fighting in Afghanistan goes, so does the pace of operations aboard the ship: Steady, sometimes intense, with little letup and two missed port calls since Sept. 2.

In five weeks, aircraft from the ship&#8217;s Carrier Air Wing One have dropped more than 90 bombs in support of NATO and coalition ground troops in Afghanistan.

Each day, about 14 F-18 sorties shoot off the flight deck towards the southern and eastern parts of the country, loaded and ready to fire.

The Norfolk, Va.-based nuclear-powered Enterprise and its crew of 5,000 personnel have been out to sea for more than five months as part of a formidable strike group that includes a destroyer, a cruiser, a frigate, an attack submarine and a fast-combat supply ship.

Since September, the Enterprise has plied the Arabian Sea off the coast of Pakistan for what has been its busiest stretch of the deployment.

For the Afghanistan missions, aircraft are typically gone almost seven hours, usually covering more than 1,000 miles there and back. In-air refueling is a must for the F/A-18 Hornets and Super Hornets, and often up to three refills are needed for one mission.

No pre-planned strikes have been carried out, Wralstad said. &#8220;We&#8217;ve been told to go provide close-air support for the guys on the ground.&#8221; Targets called in have included vehicles, Taliban safe houses, even Taliban fighters in the open.

&#8220;Whenever the guys on the ground need the ordnance, whoever&#8217;s overhead delivers that ordnance,&#8221; said the VFA 211 commander. Sometimes, he added, just flying low is enough to scatter the enemy.

Basing the aircraft in Afghanistan wasn&#8217;t doable, Wralstad said. &#8220;In concept, it could be done,&#8221; he said, but Bagram and Kandahar don&#8217;t have enough lodging, fueling facilities and ramp space to support the mission.

But the concept works for Iraq, where two Carrier Air Wing One detachments of F-18C Hornets and EA-6B Prowlers have been flying from Al Asad since early September.

S-3 Vikings from the carrier routinely fly to Iraq to deliver aircraft parts and mail and pick up pilots, who have to practice night landings on the carrier about every 14 days.

&#8220;The reports that we get from the ground are that the coalition &#8230; has done some great work in terms of effectiveness against the Taliban,&#8221; said Rear Adm. Raymond A. Spicer, Carrier Strike Group Twelve commander.

&#8220;For Operation Medusa, in the vicinity of Kandahar, we were just part of a coalition force that was striking targets there,&#8221; he said. &#8220;It looks like we got the Taliban out of Kandahar. They dispersed throughout the suburbs, if you will. We&#8217;re just seeing pockets of resistance now.&#8221;

Wralstad said last week that the rate of munitions-dropping has slowed in the last week to 10 days. But he doesn&#8217;t know for certain whether that&#8217;s due to the operation&#8217;s success.