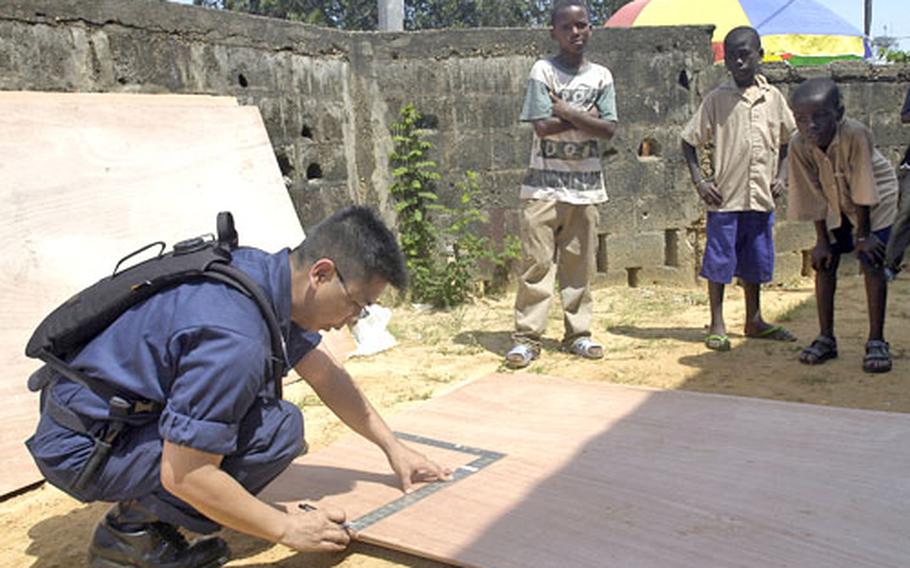 It had been since at least 1974 that a U.S. Navy ship pulled into the Luanda Port of Angola. So it seemed reasonable that the recent visit of the submarine tender USS Emory S. Land would be met with skepticism by Angolans, Navy Capt. Tom Rowden said.

But the &#8220;ice was broken rapidly&#8221; as U.S. sailors from the Land hosted Angolan officials, including an admiral and nine colonels, Rowden said.

The Americans let sailors dabble with some of the ship&#8217;s high-tech equipment, including the hydrographic equipment that provides detailed mapping of the harbor&#8217;s sea floor, Rowden, commander of Task Force 65, said during a recent telephone interview from the ship.

Roberto de Almeida, Angola&#8217;s speaker of the National Assembly, marked the Land&#8217;s visit as pivotal in strengthening relations between the United States and the West African nation, according to a news account published Tuesday in the Angola Press.

&#8220;Besides the political and economic relations, I consider to be very useful the straightforward relationship &#8230; the two countries&#8217; leaderships&#8221; share, the news agency quoted de Almeida as saying.

The Sardinia, Italy-based Land is roughly midway through a two-month deployment to the Gulf of Guinea, its second mission in as many years, to tutor African military and government leaders on how to defend against crimes such as smuggling, piracy and terrorism.

The ship has visited ports in Sa&#245; Tom&#233; and Principe, Gabon, the Congo and Angola. The deployment is part of U.S. European Command&#8217;s big push south and east of Europe to secure vulnerable states where terrorists are working to gain a foothold. Rowden cast glowing accolades on the crew&#8217;s midpoint deployment.

The Land crew&#8217;s missions have run the gamut from teaching various African navies how to repair dilapidated ships and community relation projects such as rebuilding schools to good-natured basketball games in which U.S. sailors repeatedly lost, Rowden teasingly lamented.

Training has focused on classroom lessons in which lawyers skimmed issues relating to international maritime law, including protections of people and property at sea, issues of refugees, laws of armed conflict at sea, and rules governing piracy and terrorism, said U.S. Coast Guard Cmdr. Rosanne Trabocchi, from the Defense Institute of International Legal Studies, based in Newport, R.I.

The students, primarily African military officers, &#8220;have been asking a lot of questions, everything from use-of-force policies to questions about duties to protect borders vice duties to perform rescues at sea,&#8221; she said.