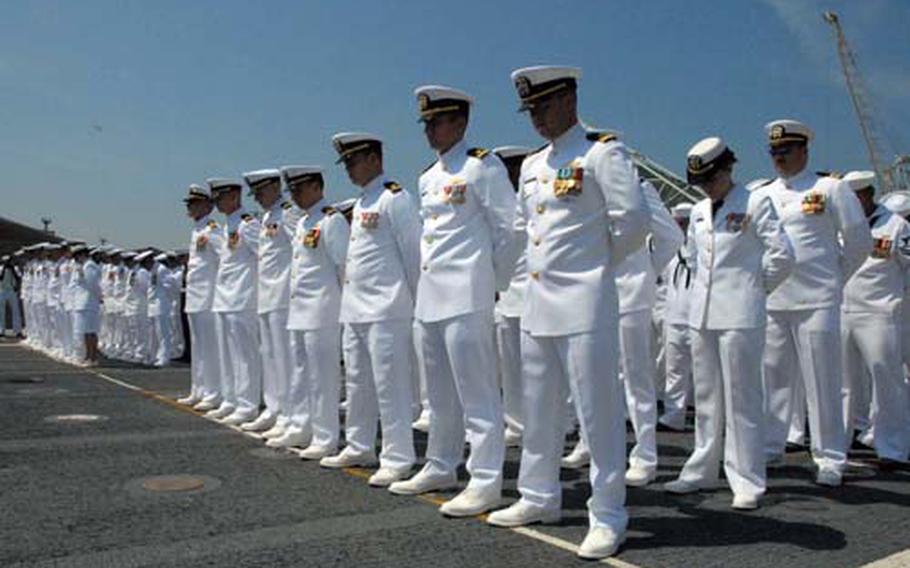 Sailors line the deck of the USS Denver at Sasebo Naval Base on Thursday. The ship sailed from the United States and exchanged with the USS Juneau after several weeks of work and a ceremony at the base. (Travis J. Tritten / S&S)

Sailors line the deck of the USS Denver at Sasebo Naval Base on Thursday. The ship sailed from the United States and exchanged with the USS Juneau after several weeks of work and a ceremony at the base. (Travis J. Tritten / S&S) 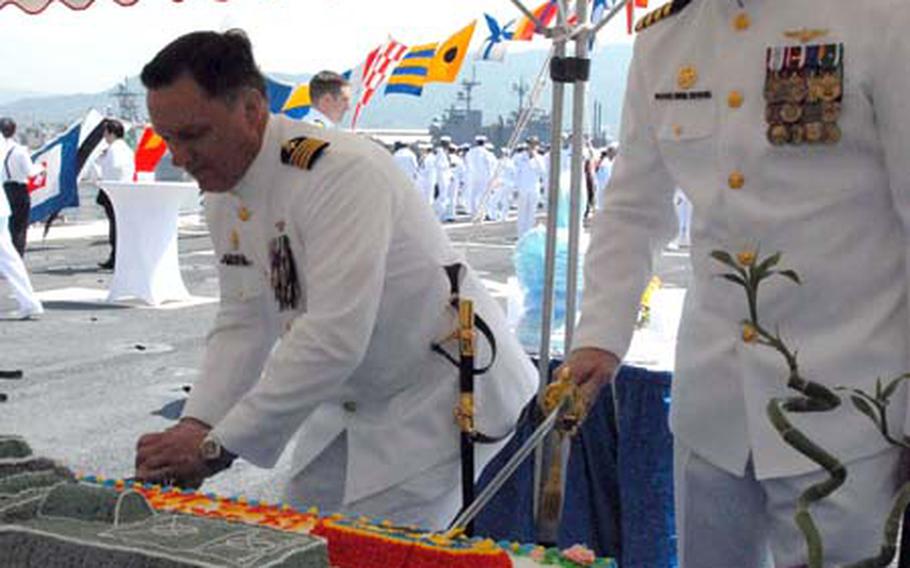 Capt. Dennis Mikeska, left, and Capt. Kent Whalen cut a cake during a command exchange ceremony at Sasebo Naval Base on Thursday. Whalen is the new commander of USS Denver, which sailed from the United States and was swapped with the USS Juneau after several weeks of work and a ceremony at the base. (Travis J. Tritten / S&S)

SASEBO NAVAL BASE, Japan &#8212; After weeks of work, sailors wrapped up the hull swap between the USS Denver and USS Juneau on Thursday.

Denver will remain forward-deployed to Sasebo Naval Base while the Juneau was scheduled to depart Sunday for the United States, where it will be mothballed.

For Sasebo sailors, the move to a new ship means improved air conditioning, new galley equipment and a self-service laundry.

The two ships are the same age, but Denver was overhauled in 2006 with new weapons and power systems, according to the Navy.

Denver and Juneau sat stern to stern for two weeks as the Sasebo crew trained and exchanged contents of the ships with a crew from San Diego.

"All the stuff being moved back and forth &#129;c there&#129;fs been frustrations but you&#129;fve got to get the job done somehow," said Seaman Apprentice Preston Williams, a Sasebo sailor who transferred onto the Denver.

Many local sailors spent the past two weeks getting acquainted with new equipment.

Petty Officer 2nd Class Oscar Delcid, who is a quartermaster, said the transition has been "long and hard" but the visiting crew helped ease him into the navigation system.

The hull swap was successful and on schedule, partly because the crews worked weekends to keep the transition on track, said Capt. Kent Whalen, who took command of the Denver during a ceremony Thursday on the ship&#129;fs deck.

Now, the new Denver crew can look forward to some down time in the coming weeks, Whalen said.

"There are one or two items to move but everything has been done within the 17 days" allocated for the hull swap, he said. "We are going to move back to our normal berth in the basin next week, and there should be an opportunity to give [the crew] some time off."

Meanwhile, the former crew of the Denver took command of the Juneau on Thursday.

Those sailors were scheduled to spend three days of liberty in Sasebo before returning to San Diego, the Navy said.

Many of the San Diego sailors were young and excited about being overseas for the first time, Capt. Dennis Mikeska said.

The crew would be spending its off time touring the city and the surrounding area and experiencing the Japanese culture, he said.

Seaman Apprentice Zachary Hebert said it was his first time in Japan, and he was surprised by the stoplights for pedestrians at Sasebo&#129;fs downtown arcade.

"It was actually a lot different than in America," he said.

The USS Denver offers a variety of new features for the Sasebo crew that took charge this week. Here&#129;fs what a recent modernization added to the ship:

&#129;&#161; Upgraded air conditioning and refrigeration throughout the ship.

&#129;&#161; All new electrical distribution systems with new buses and switches for greater flexibility.