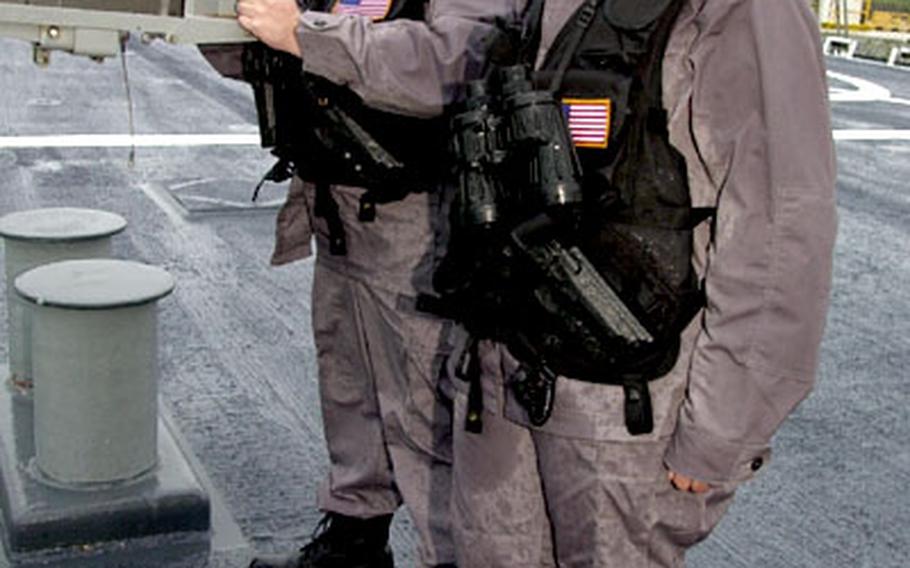 The plain, two-piece uniforms are dyed with almost the same shade of gray as the paint used on U.S. Navy ships. Although the outfit is as drab as the hull of the ship, some sailors said they like them.

The ship received 130 of the uniforms for its deployment, the destroyer&#8217;s first since the Oct. 12, 2000, terror bombing in Yemen. The destroyer received the uniforms a few days before it departed Norfolk, Va.

The Navy is reviewing its uniform and recently completed a survey about what sailors like and dislike. Sea or shore, sailors said they preferred a camouflage utility uniform as their primary working outfit.

The uniform is designed for sailors guarding the ship. Force protection and anti-terrorism teams must wear the uniforms while on duty when manning weapons at posts around the ship, from bow to stern.

While the outfits are new to the Navy, the style is traditional. They are similar to the typical battle dress uniform and each has deep pockets sewn into the pants and blouse.

What sets it apart from the Army and Marine Corps cammies is the absence of several colors and pattern. It has taken some time for a few sailors to get used to wearing them properly. Sailors used to wearing the blue, one-piece coverall don&#8217;t know how to correctly wear the battle dress uniforms, said Ensign James Culnen, the ship&#8217;s force protection and anti-terrorism officer.

The Navy has taken extraordinary steps to protect the ship in the wake of the 2000 bombing. Culnen isn&#8217;t sure if other ships will adopt the new fatigues for force-protection wear.