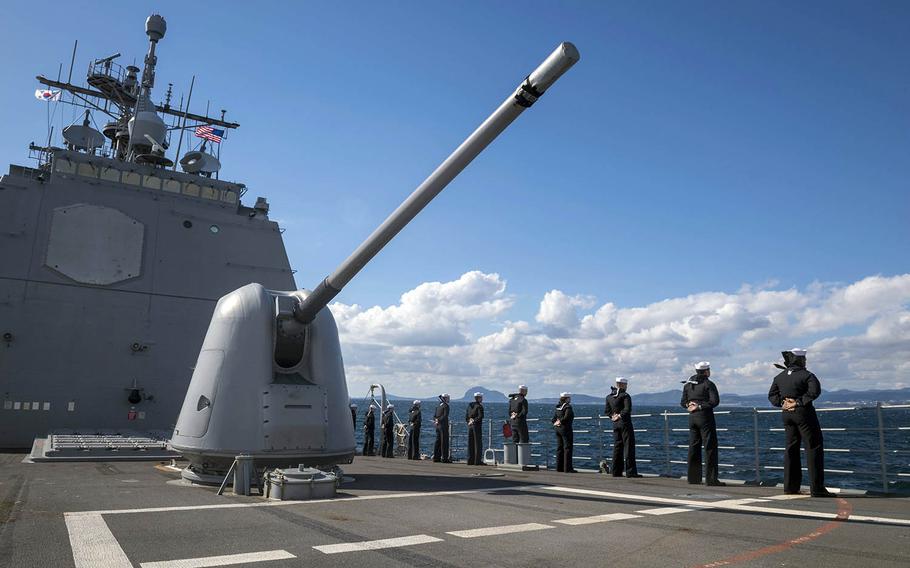 Sailors man the rails aboard the guided-missile cruiser USS Chancellorsville in waters off the Korean Peninsula, Oct. 11, 2018. (Sarah Myers/U.S. Navy)

YOKOSUKA NAVAL BASE, Japan — The Navy on Monday sent one of its guided-missile cruisers through the contentious waters around the Paracel Islands in the South China Sea, according to U.S. Pacific Fleet officials.

The USS Chancellorsville sailed by the islands claimed by China in a freedom-of-navigation operation after finishing a port visit in Hong Kong with the USS Ronald Reagan and USS Curtis Wilbur the prior week, the network reported.

The Hong Kong visit made headlines because it was the first time U.S. vessels visited China since the country turned away the USS Wasp in September.

The Wasp’s denial came after 10 percent tariffs were levied on $200 billion of annual Chinese imports and the United States had issued sanctions on China after discovering the country had bought fighter jets from Russia and a surface-to-air missile system.

The U.S. regularly conducts freedom-of-navigation missions in the area and in September sent the USS Decatur through the similarly disputed Spratly islands. During that patrol, a Chinese warship made what was called an “unsafe and unprofessional” move by sailing within 45 yards of the Decatur, forcing the crew of the U.S. ship to veer away to avoid a collision.

CNN reported that an unnamed official said a Chinese vessel followed the Chancellorsville during Monday’s operation, but its conduct was not considered dangerous.

The Chancellorsville sailing came two days before the guided-missile destroyer USS Stockdale and the replenishment oiler USNS Pecos sailed through the Taiwan Strait, another area considered sensitive by Chinese leaders.

Both operations came days before President Donald Trump and Chinese President Xi Jinping were scheduled to meet while in Argentina for the Group of 20 summit.

Trump told the Wall Street Journal this week that he is prepared to implement tariffs on another $267 billion in trade with China, and that tariffs could increase even more next year.