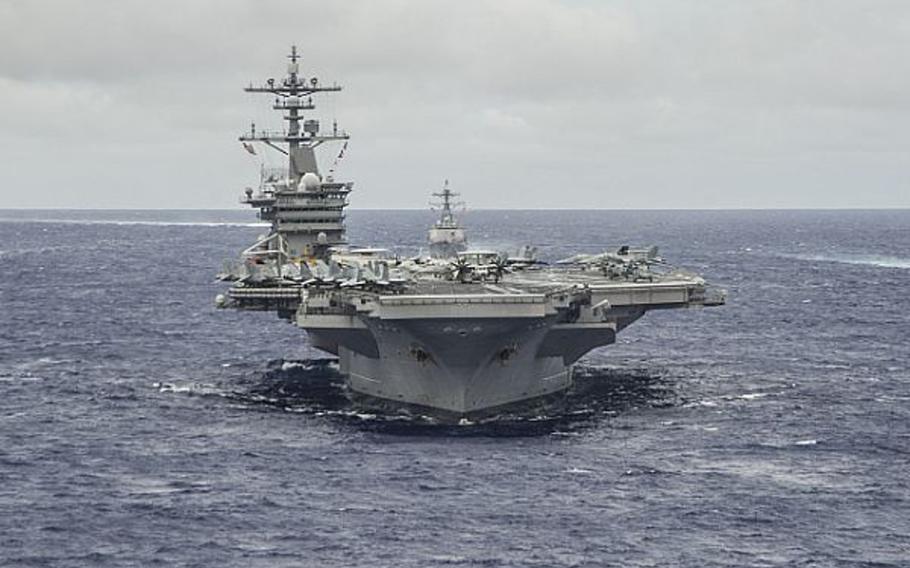 MANAMA, Bahrain — The Carl Vinson Carrier Strike Group reported for duty on Wednesday in the Middle East, where it will take over from the George H.W. Bush, which has been heavily engaged in the bombing campaign against Islamic militants.

Warplanes from the Bush have been conducting airstrikes on the Islamic State in Iraq and Syria since Aug. 8 in support of Operation Inherent Resolve.

U.S. 5th Fleet officials said the USS Carl Vinson is in the midst of a turnover with the Bush, which is nearing the end of its scheduled nine-month deployment to the 6th Fleet and 5th Fleet areas of responsibility. The ship left Norfolk, Va., on Feb. 15.

Earlier this month, Chief of Naval Operations Adm. Jonathan Greenert said that for now one aircraft carrier is adequate to meet operational demands in the Persian Gulf.

The U.S.-led coalition began bombing Islamic State militants in August, after they occupied a large area of western Iraq and threatened the capital, Baghdad. Last month, the aerial campaign was extended to Syria. Currently, much of the effort is focused on the Kurdish town of Kobani on Syria’s border with Turkey, where IS fighters equipped with tanks, artillery and trucks with mounted machine guns and autocannons have made substantial gains in recent weeks against the lightly armed Kurdish defenders.

There have been five airstrikes in Iraq and 18 airstrikes in Syria since Tuesday, U.S. Central Command officials reported Wednesday.

The San Diego-based Vinson is accompanied in the region by the guided-missile cruiser USS Bunker Hill and the guided-missile destroyers USS Gridley, USS Sterett and USS Dewey. The entire strike group left home Aug 22. with about 6,200 sailors on a scheduled deployment to the Western Pacific and the Middle East.