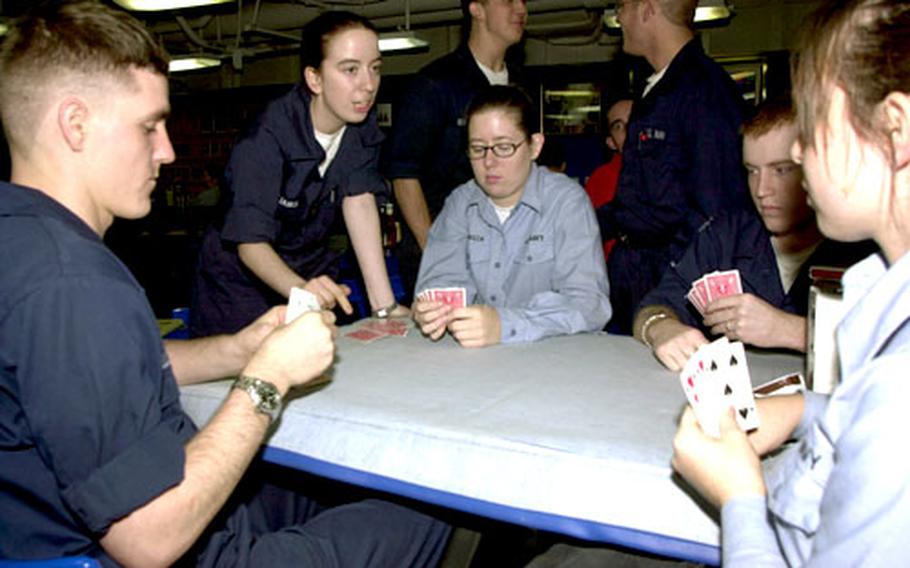 Sailors on board the USS Carl Vinson played a game of spades Friday night on the eve of making a port call in Yokosuka, Japan. About a quarter of the crew stays on the aircraft carrier during a liberty stop. (Jennifer Svan / S&S)

The little things: Not all USS Carl Vinson sailors flocked to Disneyland when the ship anchored near Yokosuka, Japan, on Saturday for a few days of liberty. Some craved solitude.

One land luxury not available on the ship is a hot bath. During a recent port call, Martinez took seven baths in three days. Another amenity she misses is eating in a sit-down restaurant. &#8220;This may sound strange, but it&#8217;s so nice to sit at a table and have a waiter or waitress serve you, instead of having to eat buffet all the time,&#8221; she said.

Missing mom&#8217;s home-cooking: Eating at sea doesn&#8217;t rival a sit-down meal at the Hilton, but at least there&#8217;s variety. Chief Warrant Officer Ray Peterson, a food services officer on the USS Carl Vinson, said menus don&#8217;t repeat for 21 days. Sailors may choose fresh or powdered milk. If the fresh stuff runs out or spoils, the ship stocks milk with a super-long shelf life &#8212; up to 180 days.

The Vinson has three vegetarians, says Peterson. And, yes, they are nourished, as the ship replenishes its perishable vegetables about every 15 days.

Rules and regs: Like any small city of 5,200, the USS Carl Vinson has a jail, but unlike most small cities, it&#8217;s sometimes empty. A day before the aircraft carrier pulled into Yokosuka, Japan, its lone inmate was due to be released.

Senior Chief Petty Officer Rebecca Richey, 37, a master at arms, said the most incarcerations she&#8217;s seen at any one time is about eight.

Another reason for the low numbers may be that brig life is just plain harsh. There&#8217;s no outdoor recreation area. During waking hours, sailors must sit at attention or stand; they can&#8217;t sleep in their rack until after taps. Reading is limited to the Bible or military rules and regulation manuals, though long-term prisoners enrolled in college courses may read their textbooks. The shower is a not-very-private box.