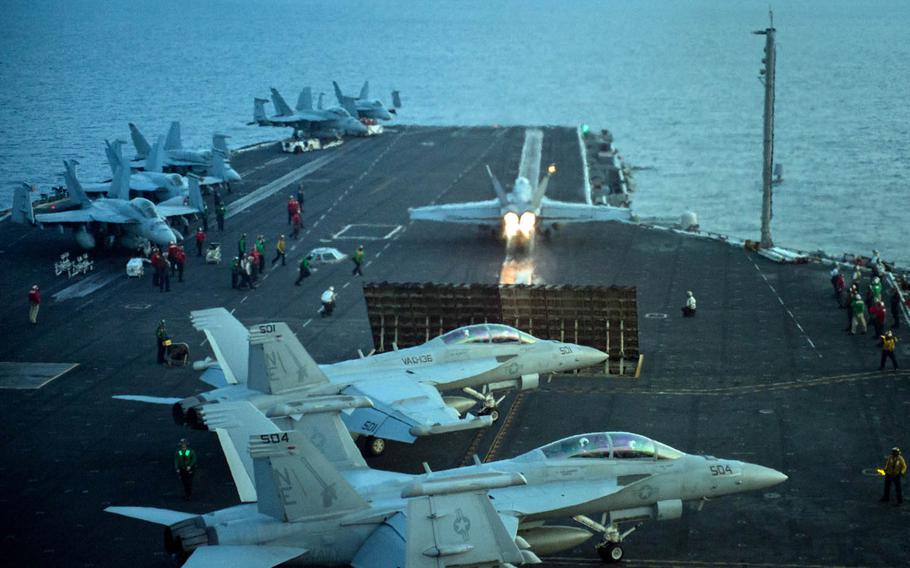 SEOUL, South Korea — The USS Carl Vinson’s crew is getting an extra month at sea as the strike group sails toward the Korean peninsula following much confusion over its initial orders.

The announcement by the group’s commander, Rear Adm. James Kilby, came after photos showed the aircraft carrier and its fleet of warships were nowhere near the divided peninsula as tensions over North Korea’s nuclear weapons program reached a peak.

“Our deployment has been extended 30 days to provide a persistent presence in the waters off the Korean peninsula,” Kilby wrote Wednesday on the group’s Facebook page.

“While all of us look forward to being connected with our friends and families, our nation requires us to be its flexible force, the away team, and as we have done time and time again through history, we won’t let her down now,” he added.

Earlier this month, President Donald Trump ordered the strike group to return to South Korea as a deterrent during a period when fears were high that the North would conduct another nuclear test to mark the birthday of its late founding father, Kim Il Sung, on Saturday.

That plan was thrown into doubt when photos taken last weekend showed it operating nearly 3,500 miles away, off Indonesia. The confusion was caused by miscommunications between the White House and the Defense Department, the New York Times reported Tuesday.

The carrier group was finally on its way and is expected to arrive in the region next week, the Times quoted unnamed Defense Department officials as saying.

South Korea’s Yonhap news agency, citing an unidentified military source, also reported that the strike group was expected to arrive next week. It said South Korea and the United States were discussing plans to conduct a joint exercise after it gets here.

U.S. Pacific Command said the Carl Vinson and its accompanying warships had completed a shortened, long-planned joint exercise with Australia after leaving Singapore on April 8 but had canceled a scheduled port visit to Perth.

The announcement that the crew’s deployment was being extended means the carrier will return to South Korea just over a month after it was last here to participate in annual, bilateral war games.

Trump has signaled he will take a hard line in dealing with North Korea’s defiance, and both sides have traded threats of pre-emptive military action.

North Korea didn’t conduct a nuclear test on Kim Il Sung’s birthday, which is the country’s biggest holiday. Instead it staged a massive military parade in Pyongyang that featured what appeared to be a new type of intercontinental ballistic missile.

The North also tried but failed to launch what U.S. officials said was a medium-range missile on Sunday.

Many experts warned there was still time for another “provocation” from the North as it gears up to celebrate its army’s 85th anniversary on April 25.

“Our mission is to reassure allies and our partners of our steadfast commitment to the Indo-Asia-Pacific region,” Kilby said. “We will continue to be the centerpiece of visible maritime deterrence, providing our national command authority with flexible deterrent options, all domain access, and a visible forward presence.”

He also thanked the families of the sailors on board for their continued sacrifice, understanding and support.