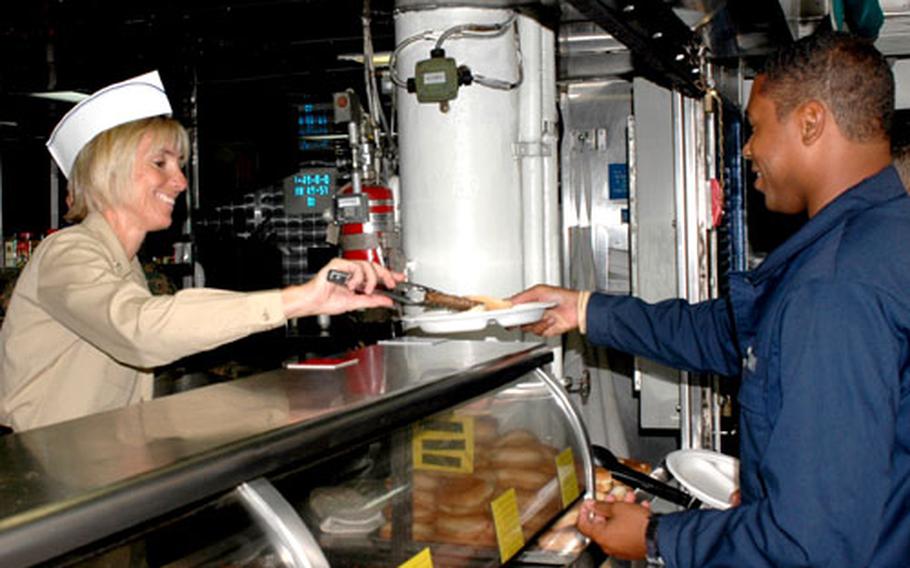 USS Boxer’s Supply Officer Cmdr. Beth Howell serves lunch to sailors and Marines on Sept. 28. Howell wanted to show her support for the supply division and her enthusiasm for the ship’s innovative 24-hour food service which allow Boxer crewmembers to get meals at any time. (James F. Bartels / U.S. Navy)

When a sailor is hungry, it&#8217;s tough to wait until chow time to grab some grub.

So the San Diego-based amphibious assault ship USS Boxer, currently in the 7th Fleet and under operational control of Task Force 76, tweaked meal times before embarking on its current fall deployment last month to create a 24-hour mess, according to a ship news release.

The result &#8212; all-day access to meals &#8212; allows sailors to trickle in and out of the mess, rather than limiting them to specific meal times, when long lines can form.

&#8220;A long line with the 24-hour service is a 30-minute wait, whereas before it was over an hour,&#8221; Senior Chief Petty Officer Russ Paje, a culinary specialist who helped lead the change, was quoted as saying. &#8220;People were discouraged and wouldn&#8217;t wait for the meals provided, resorting to junk food like candy and soda.&#8221;

The change allows the ship&#8217;s 3,000 personnel to toss meal passes and ensures everyone gets a chance to eat &#8212; even those working odd hours.

The change will be monitored throughout the ship&#8217;s deployment.

To staff the mess full time, food service workers will work in two 12-hour shifts to cook, serve and clean.