USS Blue Ridge, the 7th Fleet’s flagship, is back home after four months at sea 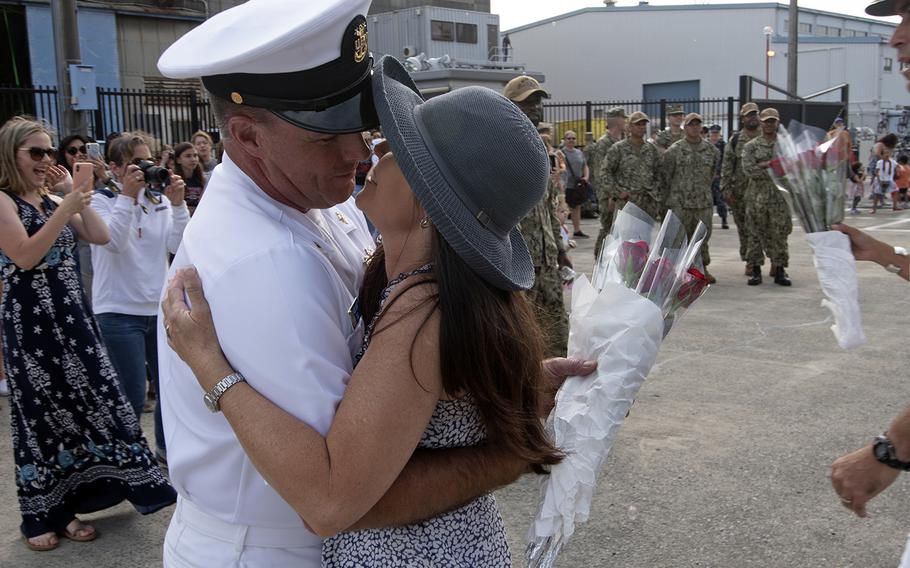 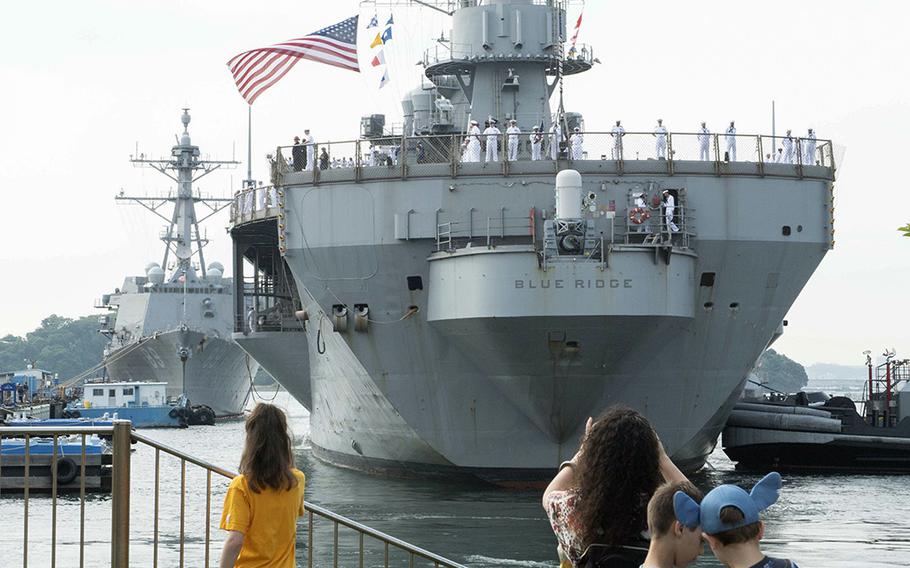 Families of sailors assigned to USS Blue Ridge wait as the ship returns to its homeport, Yokosuka Naval Base, Japan, May 29, 2019. (Aaron Chase/U.S. Navy)

YOKOSUKA NAVAL BASE, Japan — The USS Blue Ridge recently dropped anchor back in its homeport in Japan after 114 days spent visiting 11 ports in nine Indo-Pacific nations.

While at sea, the embarked 7th Fleet command staff conducted several exercises around the Indo-Pacific. Just before returning to Yokosuka, the Blue Ridge took part in Pacific Vanguard, a new multilateral exercise between the United States, Japan, Australia and South Korean navies.

“Blue Ridge provides a unique platform from which we conduct the important business of ensuring a free and open Indo-Pacific,” Vice Adm. Phil Sawyer, 7th Fleet commander, said in the statement. “We’ve made great progress on our priorities in this region thanks to the tireless effort and professional expertise of everyone on the flagship during its time at sea.”

With each port visit, the Blue Ridge was the hub for professional exchanges among regional navies, hosting over 30 senior leader engagements, maritime cooperative activities with the Philippine navy and staff talks in Thailand, according to the statement.

A seagoing communications hub carrying computers, communications equipment and other electronic facilities, the Blue Ridge is the command ship for the 7th Fleet and an amphibious task force, as well as other missions. It has accommodations for 250 officers and 1,300 enlisted crewmembers.

Blue Ridge also participated in the Langkawi International Maritime and Aerospace Exhibition, a biennial maritime and aerospace exhibition in Malaysia. The port visit concluded with a pass in review conducted by Malaysian Prime Minister Mahathir Bin Mohamad, the statement added.

During the ship’s deployment, the Blue Ridge also joined multinational patrols to enforce international sanctions imposed on North Korea by looking for illicit ship-to-ship transfers in the East China Sea.

Over the course of the nearly four-month deployment, servicemembers aboard the flagship worked with the local communities of each country to complete 10,000 hours of community service during 26 community outreach events at orphanages, schools, elderly homes and civic centers, according to the statement.

“Our team’s efforts to accomplish its mission have been amazing,” Capt. Eric Anduze, Blue Ridge commander, said in the statement. “Our engagements have been spot on, and this has been a wonderful experience for all of our Sailors to participate in a lifetime’s worth achievements.”

The steam-powered ship returned to sea in October for short trips after two years of maintenance, upgrades and repairs costing more than $60 million.