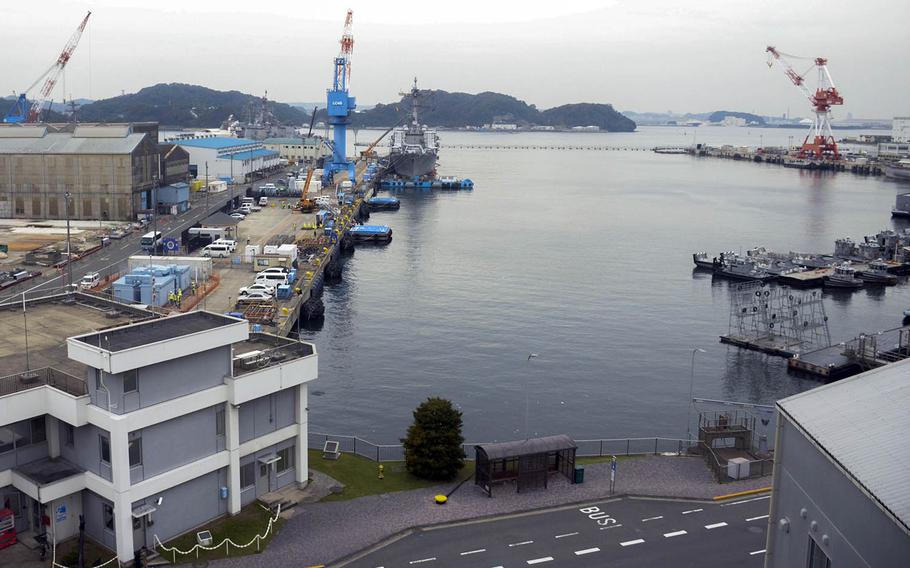 Buy Photo
A berth at Yokosuka Naval Base, Japan, that once held the USS Blue Ridge was empty Tuesday, Oct. 3, 2018, after the 7th Fleet command ship returned to sea after two years of maintenance. (Christian Lopez/Stars and Stripes)

Buy Photo
A berth at Yokosuka Naval Base, Japan, that once held the USS Blue Ridge was empty Tuesday, Oct. 3, 2018, after the 7th Fleet command ship returned to sea after two years of maintenance. (Christian Lopez/Stars and Stripes) 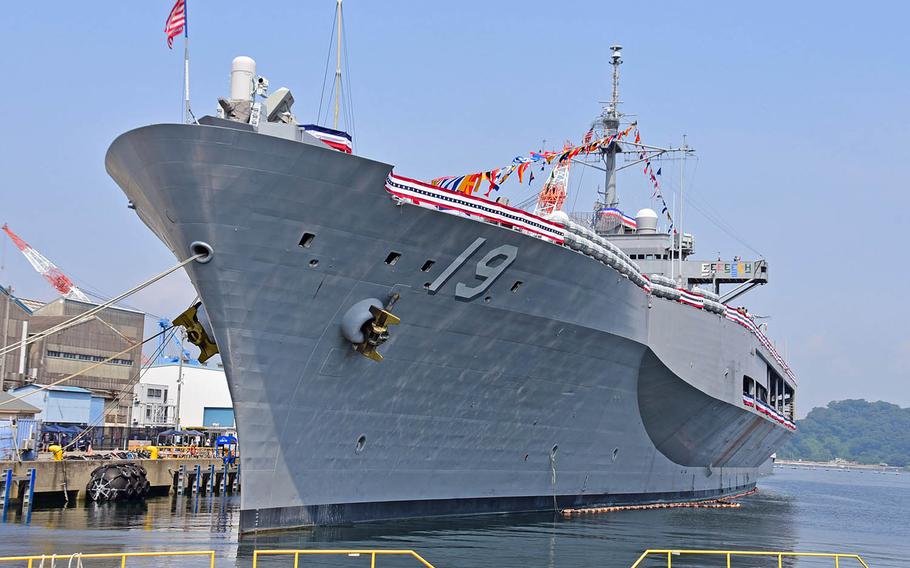 The USS Blue Ridge is adorned with flags and banners during an annual Friendship Day celebration at Yokosuka Naval Base, Japan, Aug. 4, 2018. (Adam Thomas/U.S. Navy)

YOKOSUKA NAVAL BASE, Japan — One of the most prominent berths at Yokosuka was unusually bare Wednesday morning, causing passersby to stop along the sidewalk and take photos of the naked pier.

The USS Blue Ridge returned to sea Tuesday after two years of maintenance, upgrades and repairs, said 7th Fleet spokesman Lt. Joe Keiley, leaving empty its berth near a major base intersection where its sat since leaving dry dock in January.

“While at sea, the crew and embarked 7th Fleet staff are exercising the ship’s primary mission to command and control 7th Fleet,” Keiley said.

Commissioned in 1970, the Blue Ridge is the Navy’s oldest operational ship. It was scheduled in June 2016 to undergo 14 months of maintenance, repairs, refurbishments and system upgrades, but unexpected issues arose with its engineering plant, causing it to be kept in dry dock past the scheduled completion date of August 2017.

The repairs cost more than $60 million and took about 135,000 man-hours to complete, the Navy previously said. Vice Chief of Naval Operations Adm. William Moran told Stars and Stripes last month that having the Blue Ridge back to sea would be worth the effort and expense.

“We have invested a lot of money into keeping that ship relevant for what that ship is made for, which is a command ship for the 7th Fleet commander,” he said. “It’s an old ship, but she’s got all the modern capabilities and then some, which says a lot about our commitment.”

Seventh Fleet staff moved back onto their flagship this summer from temporary on-base offices used since 2016 when maintenance on the vessel began. The ship’s boilers were re-lit in June.

In combat, the Blue Ridge would be used as a central planning vessel; during peacetime, bringing the flagship and the 7th Fleet’s leadership on port visits to send a strong message to allies.

Keiley said this concept is unique in that it “is the only fleet that brings the staff out to sea to operate this way” for long lengths of time. The 6th Fleet uses its USS Mount Whitney command ship in a similar manner, but for shorter periods, Keiley said.

It is unclear when the Blue Ridge will return to Yokosuka, since the Navy does not discuss ship movements.