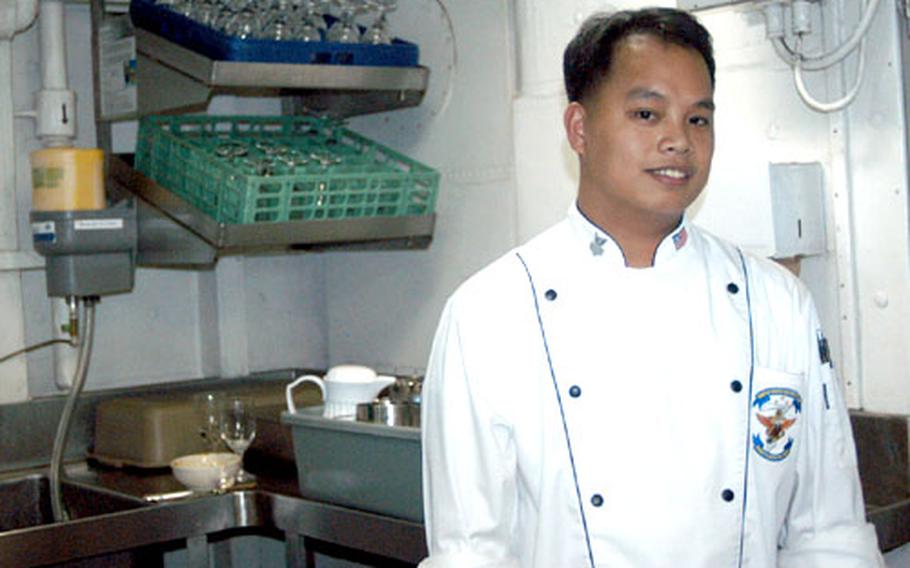 He&#8217;s fed the prime ministers of England, Israel and Brazil as well as public and private dignitaries, stumbling upon the dietary restrictions of Apple cofounder Steve Jobs, a vegan.

As the former presidential chef at Camp David, Md., Villanueva brings a great menu of skills to his current job, leading petty officer for the Flag Mess aboard USS Blue Ridge.

He learned mealtime had to adapt to the president&#8217;s chaotic schedule and if dinner were delayed long enough, the cooks would dump the old dinner and start anew.

After four years with the president, the culinary specialist moved on, landing in 2000 on the shores of Yokosuka to serve in the Flag Mess, where he feeds and serves the commander of the 7th Fleet and his staff &#8212; a much easier endeavor by comparison, he noted.

The 31-year-old from Hawaii arrived at a time of flux, when ship&#8217;s staff was updating the mess &#8212; refurbishing the dining room, augmenting menus and even changing the uniforms worn by the staff.

To improve his skills, Villanueva this summer attended a Thai cooking institute, which taught him 285 essential Thai recipes and earned him the title of Certified Chef de Cuisine in Thai cooking.

He learned about the program after meeting the Thai Chefs Association&#8217;s president, whom Villanueva invited for a tour of the Blue Ridge on a stop in Thailand in 2001.

That mentor also nominated Villanueva for a world-class culinary honor, and last month, he learned he was knighted a Chef des Rotisseur by Chaine des Rotisseurs, a medieval-era French culinary association.

When Villanueva joined the Navy, he didn&#8217;t plan to cook. He chose the job since it offered a less-onerous work schedule than some shipboard jobs and gave a great perk: free food.

As an undesignated sailor living in San Diego, eating out could eat up his budget. Mess specialists, as they were called, at least had good grub.

He began as an attendant, washing dishes.

He learned under a tough chief petty officer, who once gave him the task of perfecting potato garnishes, on his own.

Cooking came naturally to Villanueva. Growing up, his family usually ate at home, enjoying his mother&#8217;s cooking. In Hawaii he learned about foods from around Asia, which would have a long-lasting effect on his culinary pursuits.

Villanueva said he still enjoys cooking after a decade as a Navy chef, and adds that it has had a positive influence in his life.

His career and accomplishments have instilled a work ethic he believes helps him succeed in the hottest of kitchens.

He was nominated to work at Camp David by his superiors because of that work ethic &#8212; after becoming junior sailor of the year in 1994 of his Destroyer Squadron in San Diego, earning a Navy Achievement Medal.