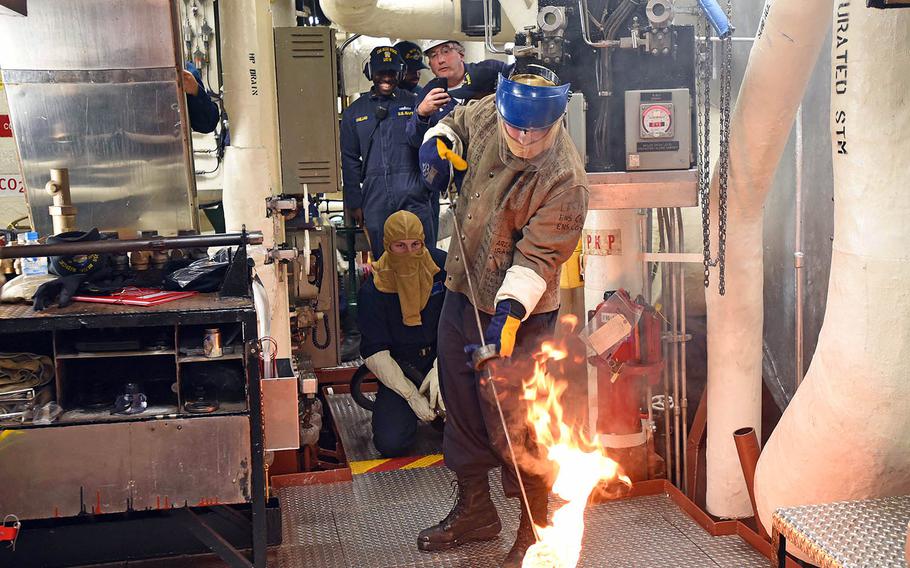 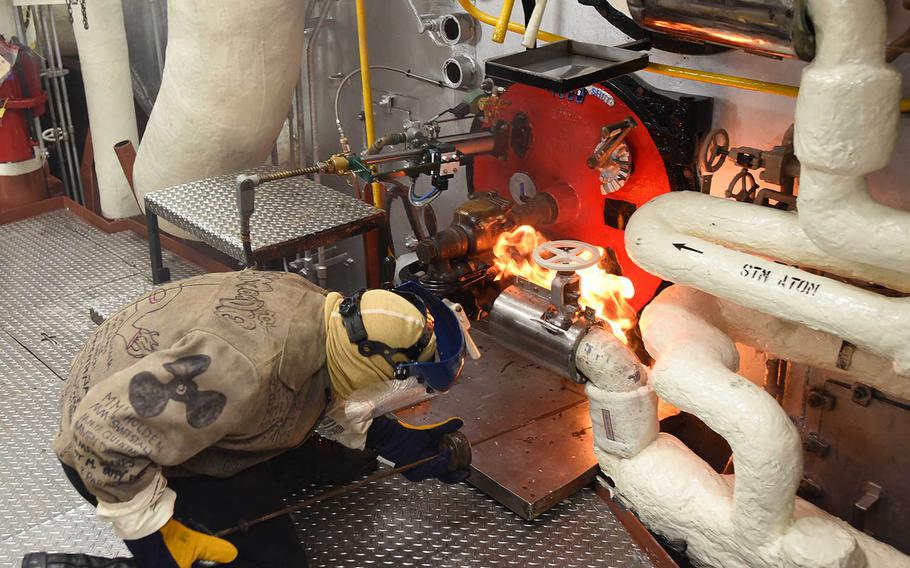 YOKOSUKA NAVAL BASE, Japan — The USS Blue Ridge lit its boilers for the first time in two years this week, signifying a big step toward bringing the Navy’s oldest deployable warship back to sailing condition.

As steam plumed from the 7th Fleet’s flagship late Tuesday evening, sailors who had watched the Blue Ridge undergo various repairs, refurbishments and system upgrades since June 2016 felt a great sense of accomplishment.

“I saw this engine room before dry dock when she was still steaming. Then during the time that it was shut down and ripped apart, it seemed like everything was working against us,” said Petty Officer 3rd Class Raymond Davis III, a machinist’s mate attached to the Blue Ridge. “To finally light off the boilers is one of the best feelings I have had in the United States Navy.”

Commissioned on Nov. 14, 1970, the Blue Ridge has spent 38 years forward-deployed to Yokosuka, Japan. It is scheduled to stay in service for at least another two decades.

With the boilers ignited, the warship can operate under its own power — meaning it is “one step closer to returning to sea and being fully operational in support of the 7th Fleet,” the Navy said.

The warship’s maintenance period was expected to last 14 months before unexpected issues arose with its engineering plant. In the end, repairs took about 135,000 man hours and cost more than $60 million.

Upgrades included modernizing the engineering plant and refurbishing the main condenser and ventilation systems, the service said. It was also outfitted with the Consolidated Afloat Networks and Enterprise Services computer system, which “consolidate[s] and modernize[s] communications, computers and intelligence network systems,” according to Northrop Grumman.

The amount of time the ship spent undergoing maintenance offered various challenges. There was a large turnover of crewmembers, and about 80 percent of the Blue Ridge’s engineers came “straight from boot camp or other non-engineering assignments” because the ship had entered restricted availability status, the Navy said.

“They had to go from learning the difference between the bow and the stern, to learning how to conduct a material check on an advanced piece of equipment,” said Lt. Cmdr. Stephen Hartley, the ship’s chief engineering officer.

Before the boilers could be ignited, the warship’s crew underwent a weeklong light-off assessment. The ship’s programs, standard operating procedures, equipment and emergency response protocols were evaluated “to ensure maximum compliance” before the first flame in two years could be sent into boiler, the Navy said.

“The magnitude of the boilers to the Blue Ridge cannot be underestimated. They produce steam for the ship’s propulsion, electrical power, auxiliary systems and potable water,” the Navy said. “Managing the complex engineering system is no easy feat, but the Blue Ridge demonstrated it was up to the task.”

“Lighting these boilers is a reflection of all the hard work that has been put in by the crew, the ship-repair facility here in Yokosuka, the contractors and the Japanese shipbuilding company assigned to complete the majority of projects,” he said.

Crozier compared the warship’s extended maintenance period to a baseball team’s preparation for a season – and the boiler ignition as the start of the first game.

“Lighting off the boilers for the first time in nearly two years is the equivalent of the first pitch being thrown,” he said. “… This means it’s now game time — time to play ball preparing to return to sea.”