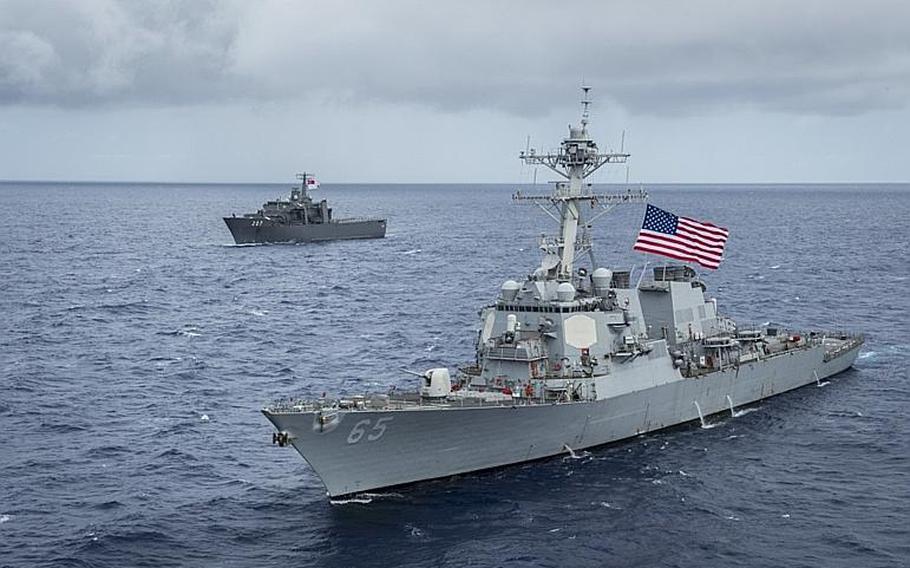 The USS Benfold and Republic of Singapore Navy?s RSS Endurance sail together during Exercise Pacific Griffin 2017, off the coast of Guam, August 28, 2017. (Courtesy of U.S. Navy)

YOKOSUKA NAVAL BASE, Japan – No injuries were reported after a U.S. warship collided with a Japanese commercial tugboat Saturday in Japan’s Sagami Bay.

The accident occurred after the Japanese vessel lost propulsion and drifted into the USS Benfold during a towing exercise, a Navy statement said. The guided-missile destroyer suffered minimal damage and is awaiting a full assessment.

The Benfold was operating under its own power, while the Japanese vessel was being towed to a port in Yokosuka, the statement said.

The Navy said the incident will be investigated.

The Benfold was conducting the routine training as part of a seamanship certification, said 7th Fleet spokesman Cmdr. Clay Doss.

The collision is the latest in a slew of accidents involving U.S. warships in the Pacific this year.

The USS Benfold is homeported at Yokosuka, home to the Navy’s 7th Fleet.