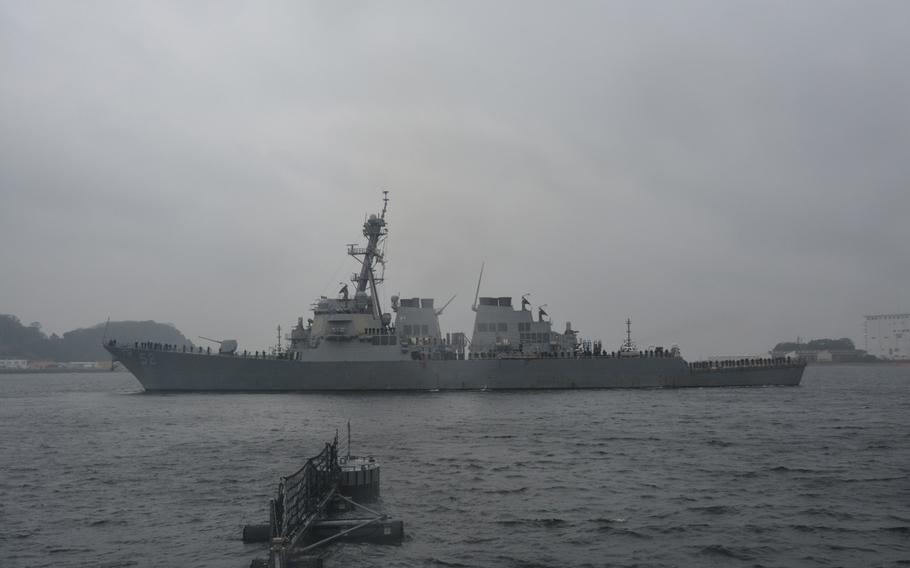 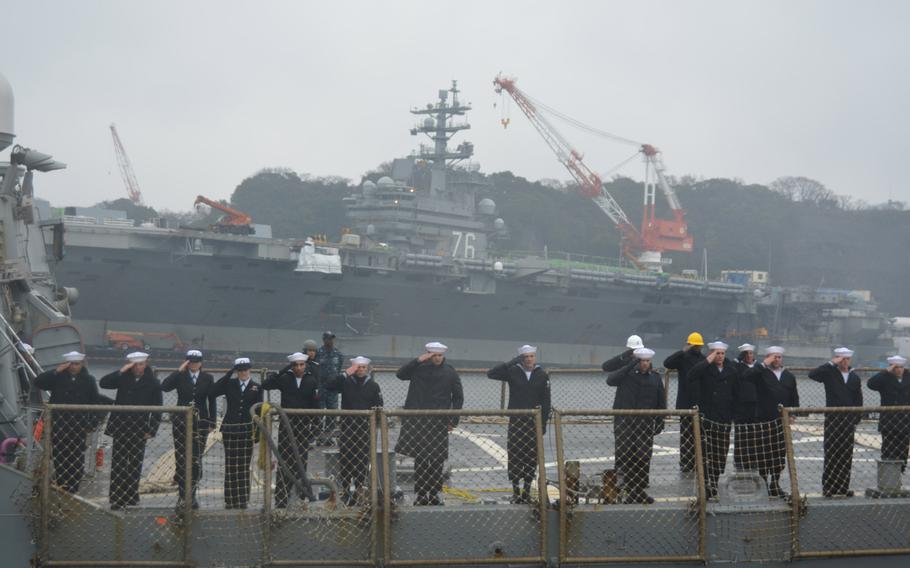 Sailors salute under a downpour as the destroyer USS Barry moors at its in pier at Yokosuka Naval Base, Japan, the ship's new homeport, on March 14, 2016. The aircraft carrier USS Ronald Reagan is moored in the background. (Erik Slavin/Stars and Stripes) 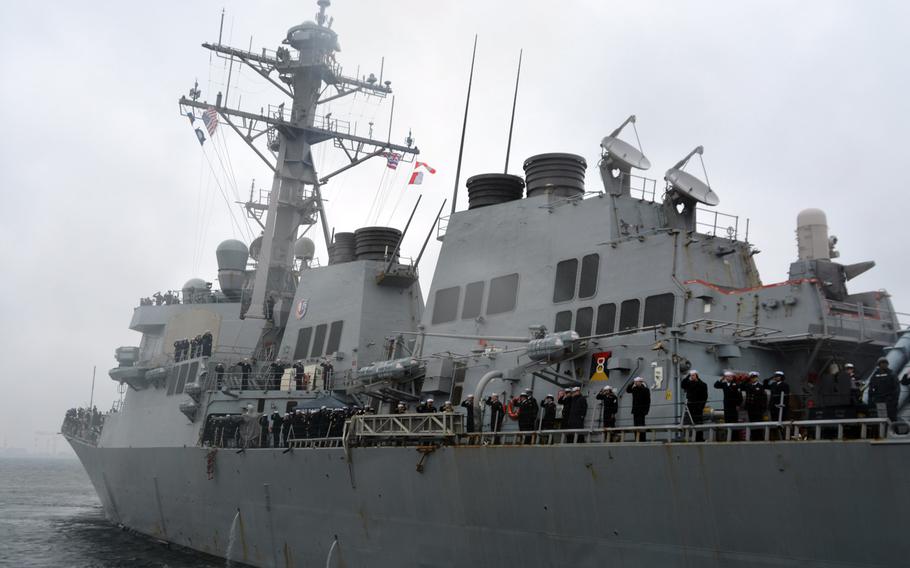 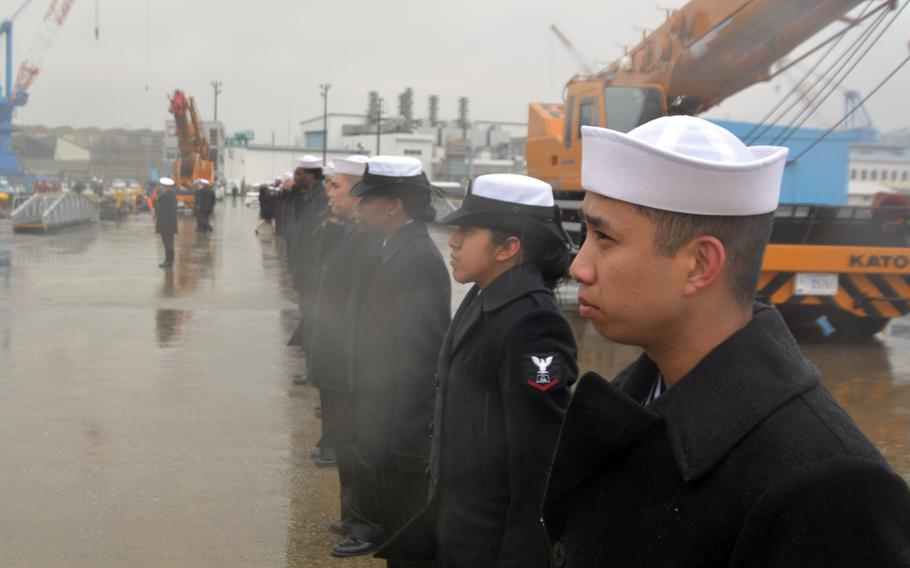 Sailors ashore await the arrival of the destroyer USS Barry, on a rainy, 40-degree day at Yokosuka Naval Base on March 14, 2016. USS Barry, formerly of Norfolk, Va., will now be based at Yokosuka for the foreseeable future. (Erik Slavin/Stars and Stripes)

YOKOSUKA NAVAL BASE, Japan — The Navy welcomed the destroyer USS Barry to its Japan-based fleet Monday, giving the force a seventh ballistic missile defense-capable ship in the midst of North Korean boasts about advances in its nuclear weapons program.

Ballistic missile defense ships, or BMDs, are among the most oft-deployed ships in the Navy. On top of that, sailors say the operational tempo at Yokosuka is one of the Navy’s most demanding.

The USS Barry and the USS Benfold, which arrived in October, each come equipped with new versions of the Aegis combat system, which includes significant upgrades on the bridge, in engineering and in the combat information center.

“We have much more capacity now that Benfold and Barry are here,” said Capt. Christopher Sweeney, commodore of the Yokosuka-based Destroyer Squadron 15. “We know the operational availability will go up, and the sustainment will become a little easier now that Barry is here.”

Having enough ships to fill commander requests has been a challenge for the Navy in recent years, particularly for submarines, BMD ships and surface ships deploying in carrier strike groups. During a House subcommittee meeting in June, Rep. Randy Forbes, R-Va., reviewed a list of BMD-capable ships averaging 9.2 months of deployment, a figure the Navy wants to reduce to seven months across the BMD-capable fleet.

There are 33 BMD-deployable ships, but the Navy says it needs 40 to fill its requests and hold down deployment times. Nine of those 40 ships would be Japan-based, according to a December 2015 Congressional Research report. The service would have 39 ships ready to deploy by 2020 at current shipbuilding and maintenance rates, according to the report.

In recent years, the Navy has moved several of its most advanced ships and air assets to the Asia-Pacific region. The shift coincides with rising tensions in the East and South China seas as China and its increasingly advanced military clash with U.S. allies over freedom-of-navigation and territorial rights.

The additions also come amid a series of announcements and threats directed at the U.S. by North Korea.

“If this H-bomb were to be mounted on an intercontinental ballistic missile and fall on Manhattan in New York City, all the people there would be killed immediately and the city would burn down to ashes,” the story quoted a nuclear scientist as saying.

Earlier this month, North Korea released photos of leader Kim Jong Un posing with a metallic sphere it claimed was a miniaturized nuclear device capable of being mounted on a missile.

Despite the rhetoric, many nuclear experts remain skeptical of North Korea’s nuclear capabilities. Although Pyongyang said in January it had tested a hydrogen bomb, which is far more powerful than an atomic bomb, seismic data didn’t indicate anything stronger than the North’s three previous underground tests.

There are also no known tests of North Korea’s KN-08 intercontinental missile, which is the only one it has that could theoretically reach Manhattan. Experts are also skeptical of the miniaturization claims, another key benchmark of a nuclear program’s advancement.

Even if North Korea’s nuclear program hasn’t reached the level it boasts of, most analysts agree it is trying to move fast.

A February launch of a satellite was viewed by the world as a ballistic missile test, in contravention of a United Nations resolution barring North Korea from such tests. The U.N. Security Council voted unanimously to tighten economic sanctions on Pyongyang earlier this month in response to the incident.