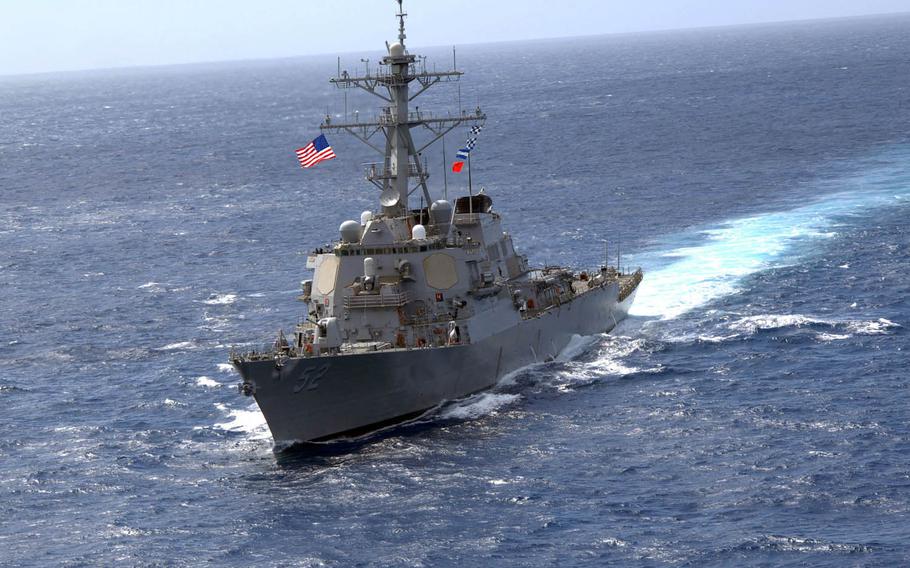 The guided-missile destroyer USS Barry transits the Atlantic Ocean in 2008. Barry is on its way to its new homeport in Japan, where it will join the 7th Fleet at Yokosuka Naval Base after spending more than 20 years in Norfolk, Va. (Troy Miller/U.S. Navy)

The USS Barry steamed away from Norfolk — its homeport for more than 20 years — on Tuesday toward its new home in Japan.

The guided-missile destroyer, scheduled to join the 7th Fleet at Yokosuka Naval Base in the spring, will replace the USS Lassen, which left Japan earlier this month and is conducting one last patrol of the western Pacific before moving on to Naval Station Mayport near Jacksonville, Fla.

Lassen made headlines worldwide in October when it challenged China’s territorial claims in the South China Sea by sailing within 12 nautical miles of Subi Reef, one of several artificial islands Beijing has been building up with runways and fortifications. The freedom-of-navigation exercise drew strong protest from China.

“We look forward to the voyage ahead and are ready for any challenge that comes our way,” Cmdr. Jennifer Eaton, Barry’s commanding officer, said in a Navy statement. “Being forward deployed to Japan is an incredible honor for every Barry sailor and their family. It gives us an opportunity to represent the United States across the globe.”

The destroyer — which features the Navy’s newest Aegis combat system and is capable of firing all Vertical Launch System ordnance, including the latest missiles — and its 300 sailors have undergone rigorous training over the past year to prepare for the move and the 7th Fleet’s busy schedule.

Eaton took command of Barry in August, replacing Cmdr. Patrick Foster who was fired following an investigation into “a series of decisions over time reflecting poor judgment, failure to meet and uphold the highest personal and professional standards, and poor program management,” the Navy said.