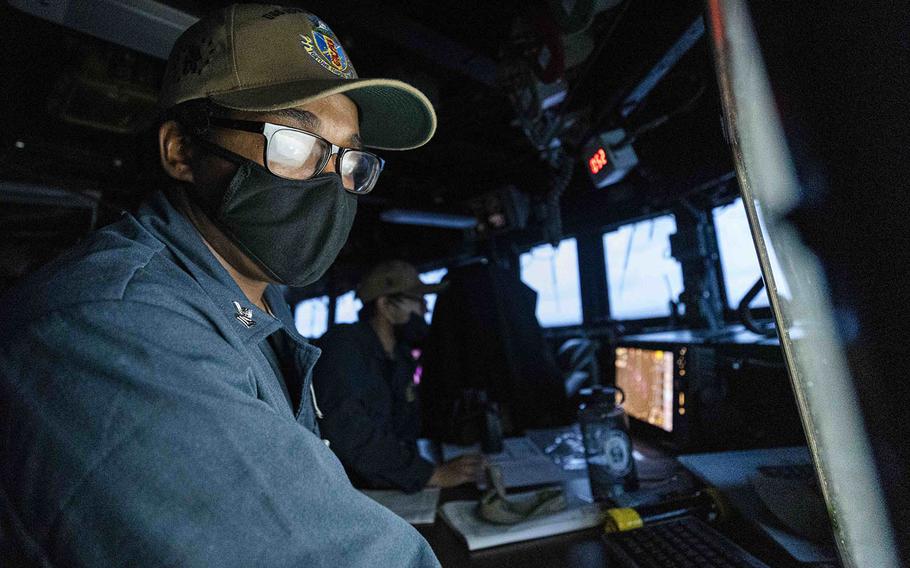 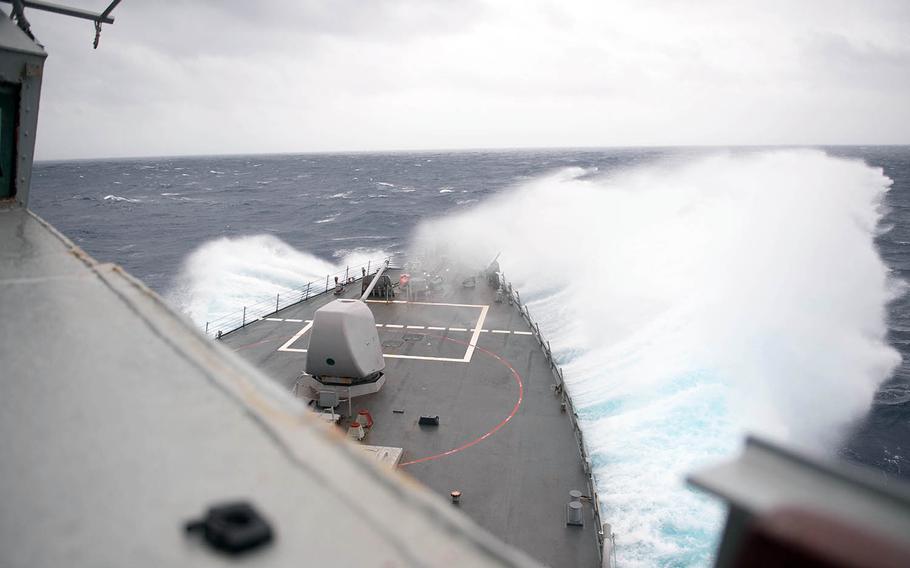 A Navy destroyer passed through the Taiwan Strait on Wednesday, nearly a week after the Chinese military challenged another U.S. destroyer’s presence in the nearby South China Sea.

The USS Barry cruised through the strait in accordance with international law, according to a statement from U.S. Pacific Fleet. It was the 10th such transit by a U.S. warship this calendar year. The last was made Aug. 30 by another guided-missile destroyer, the USS Halsey.

“The [Barry’s] transit through the Taiwan Strait demonstrates the U.S. commitment to a free and open Indo-Pacific,” the statement said. “The U.S. Navy will continue to fly, sail and operate anywhere international law allows.”

On Oct. 9, another destroyer, the USS John S. McCain, “asserted navigational rights and freedoms” in the South China Sea near the Paracel Islands, a 7th Fleet spokeswoman, Cmdr. Reann Mommsen, said in an email Thursday.

The McCain was warned by the Chinese military and told to leave, Col. Zhang Nandong, a spokesman for the People’s Liberation Army Southern Theater Command, told the country’s state-run Global Times the same day.

Such operations seriously infringe China’s sovereignty and national interests, and damage regional peace and stability, he told the newspaper.

“China owns undeniable sovereignty of the islands in the South China Sea and nearby waters,” the report said.

The destroyer USS Mustin steamed near the islands twice this year, on May 28 and again on Aug. 27.

China, Taiwan, and Vietnam each claim sovereignty over the islands and China has set up military airfields and outposts on them that have raised concerns among surrounding nations and in the United States.

The McCain’s patrol “upheld the rights, freedoms, and lawful uses of the sea recognized in international law by challenging the unlawful restrictions on innocent passage imposed by China, Taiwan, and Vietnam,” Mommsen said.

“Unlawful maritime claims in the South China Sea pose a serious threat to the freedom of the seas, including the freedoms of navigation and overflight, of unimpeded trade and commerce, and of economic opportunity for South China Sea littoral nations,” she added.

The United States challenges excessive maritime claims around the world regardless of the identity of the claimant, Mommsen said.

Under international law all vessels, including warships, enjoy the right of innocent passage through territorial seas.

“By engaging in innocent passage without giving prior notification to or asking permission from any of the claimants, the United States challenged the unlawful restrictions imposed by China, Taiwan, and Vietnam” in waters near the Paracels, Mommsen said.

International law does not permit continental states, like China, to establish baselines — coastal lines from which sea territory limits are measured — around entire dispersed island groups, she added.

“China has attempted to claim more internal waters, territorial sea, exclusive economic zone, and continental shelf than it is entitled to under international law,” Mommsen said. “By conducting this operation, the United States demonstrated that these waters are beyond what China can lawfully claim as its territorial sea.”