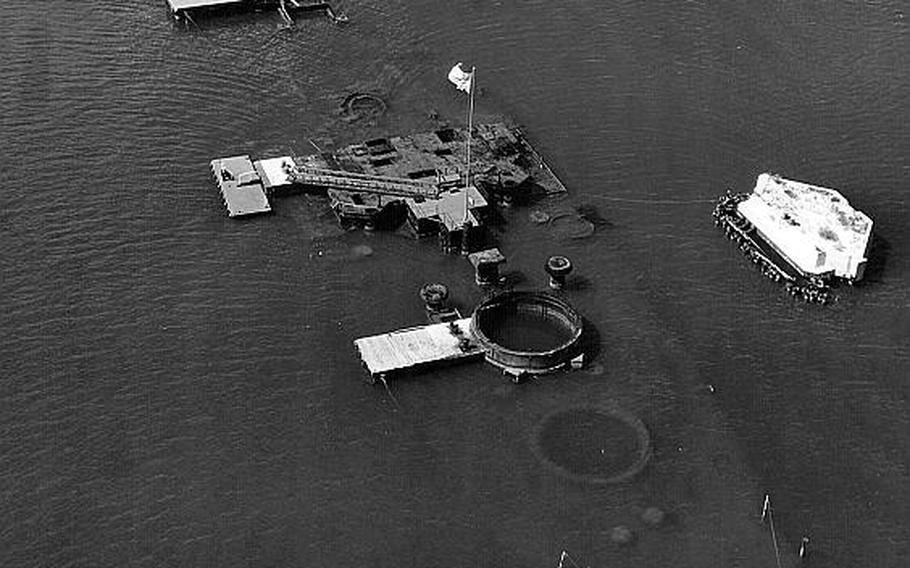 An aerial photo of the submerged hull of the USS Arizona taken in 1953 shows part of the ship's superstructure above the waterline before it was removed for construction of the USS Arizona Memorial. The flagpole is part of a temporary memorial ordered built in 1950. (Courtesy of the U.S. Navy)

An aerial photo of the submerged hull of the USS Arizona taken in 1953 shows part of the ship's superstructure above the waterline before it was removed for construction of the USS Arizona Memorial. The flagpole is part of a temporary memorial ordered built in 1950. (Courtesy of the U.S. Navy) 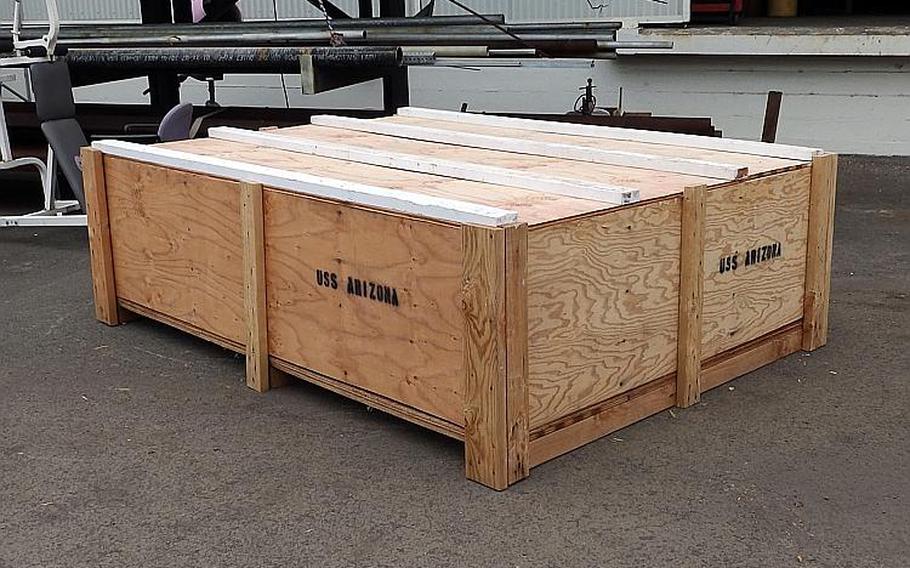 UPS is scheduled to deliver this crate holding a section of the USS Arizona to a memorial park in the Texas Panhandle. (Courtesy of UPS) 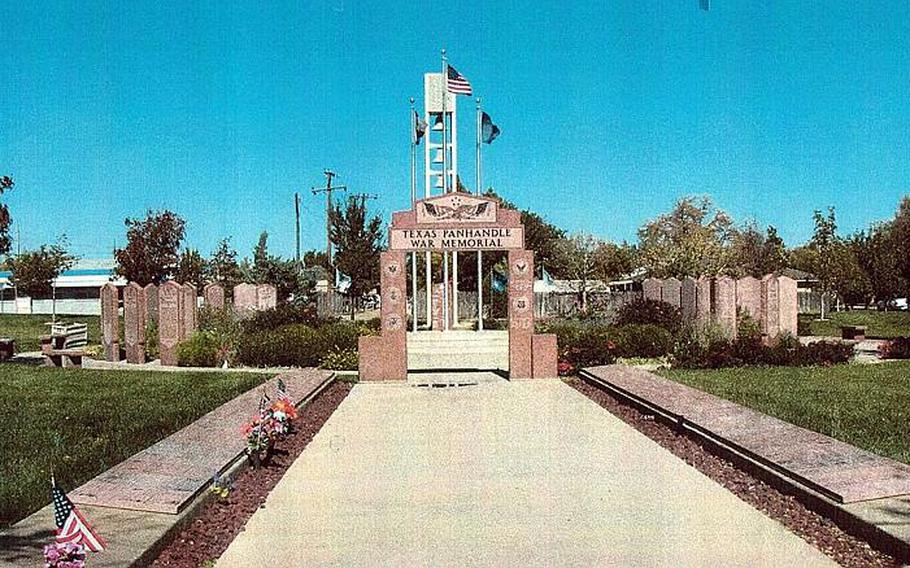 The monoliths at the Texas Panhandle War Memorial in Amarillo, Texas, will soon be joined by a relic from the USS Arizona. (Courtesy of Ernie Houdashell) 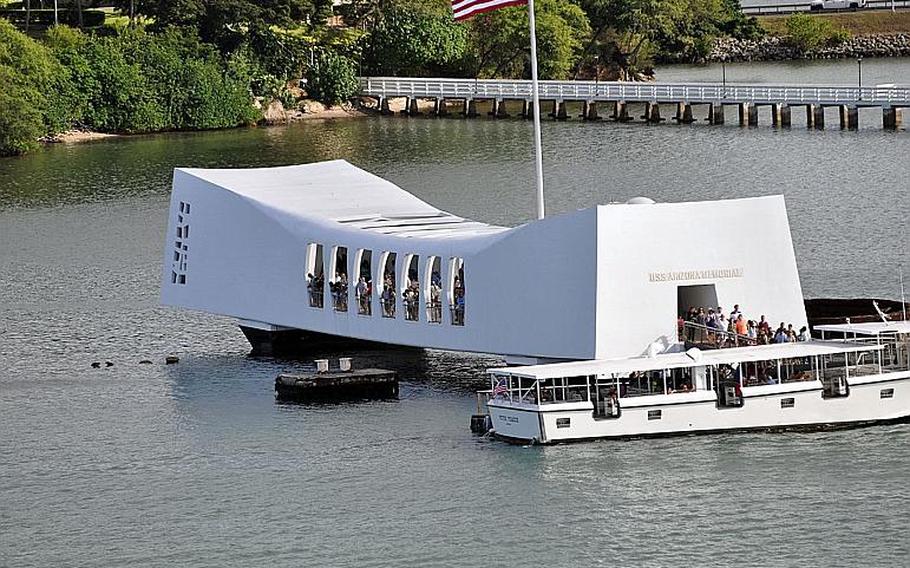 Visitors arrive by shuttle boat to the USS Arizona Memorial in Pearl Harbor, Hawaii. The submerged ship serves as a tomb for 1,102 of the 1,177 sailors and Marines who perished when it was attacked on Dec. 7, 1941. (Wyatt Olson/Stars and Stripes)

FORT SHAFTER, Hawaii — In the early 1960s, workmen spent months carving up a huge unsubmerged portion of the USS Arizona, sunk by the Japanese surprise attack on Pearl Harbor on Dec. 7, 1941.

Chunk by chunk, cranes lifted and transported pieces of the ship to the Navy’s boneyard on nearby Waipio Peninsula — all in preparation for constructing a permanent USS Arizona Memorial above the remaining submerged ship. The memorial was completed and dedicated in 1962.

“That wreckage has been resting over there basically since 1961,” said Daniel Martinez, chief historian for the WWII Valor in the Pacific National Monument, which includes the Arizona.

On Thursday, a large piece of that deck will head to a war memorial in the Texas Panhandle, delivered by UPS via air and truck.

“We’re really excited about it,” said Ernie Houdashell, a Texas county judge who headed the effort to obtain the relic. “It’s really, really an honor to think we’re going to have a piece of this national treasure.”

The relic will be mounted on a pedestal at the Texas Panhandle War Memorial in Amarillo on property owned by Randall County, Texas.

Its acquisition is part of an effort by Houdashell to obtain significant displays representing the Navy, Army, Air Force and Marine Corps for the memorial.

The Arizona artifact will join a Vietnam War-era Huey helicopter — representing the Army — and an F-100 supersonic fighter jet used by the Air Force.

“We were looking for something for the Navy guys,” Houdashell said. He had learned of the wreckage pile on Waipio Peninsula decades earlier while working for a congressman, he said.

About two years ago, he investigated the possibility of getting a section of the wreckage to display and found that the Texas memorial qualified to obtain it from the Navy.

John Dalton, who served as Navy secretary in the 1990s, made that possible, Martinez said.

“He issued an order that the Arizona wreckage should be dispensed to veterans of Pearl Harbor and to museums that requested a piece of it,” he said. “There are now pieces of wreckage all over.”

Navy Region Hawaii historian Jim Neuman said that 112 relics from the Arizona wreckage field have been sent to various museums, educational organizations and public facilities around the country since 1983, the bulk of them after the USS Arizona Relics Program was established in the 1990s.

Among those that have claimed a piece of USS Arizona history are the National WWII Museum in New Orleans and the National Museum of the Pacific War in Fredericksburg, Texas.

But those displays are small compared to the one being shipped to Amarillo, Houdashell said.

“It’s not pretty — but neither was it when it got bombed,” he said.

UPS is providing free shipping, and the crate is scheduled to arrive in Amarillo on June 30.

“This is part of the fabric of American history, and if we can help make the Arizona and Pearl Harbor real to new generations of students, particularly in Amarillo, it’s something we want to be a part of,” said Jim Mayer, public relations manager at UPS.

The goal is to dedicate the new display on Dec. 7 this year, Houdashell said.

An accompanying plaque will diagram the Arizona and the location from which the relic was removed, he said. Another plaque will list the names of the men who were aboard the ship on the day of the attack.

The Amarillo artifact includes a portion of the wooden planks used in the first, temporary memorial built on the Arizona’s boat deck in 1950 by order of Adm. Arthur Radford, then-commander of Pacific Fleet.

The design for the permanent memorial, however, called for no portion of the viewing area to be in contact with the Arizona, Martinez said.

Thus, a large section of the superstructure that stood above the waterline had to be chopped up and moved to the marshland of Waipio Peninsula.

“It’s going to have a very reverent place other than over on a swampy island rotting away,” Houdashell said of the artifact. “We’re going to treat it in a very sacred manner.”