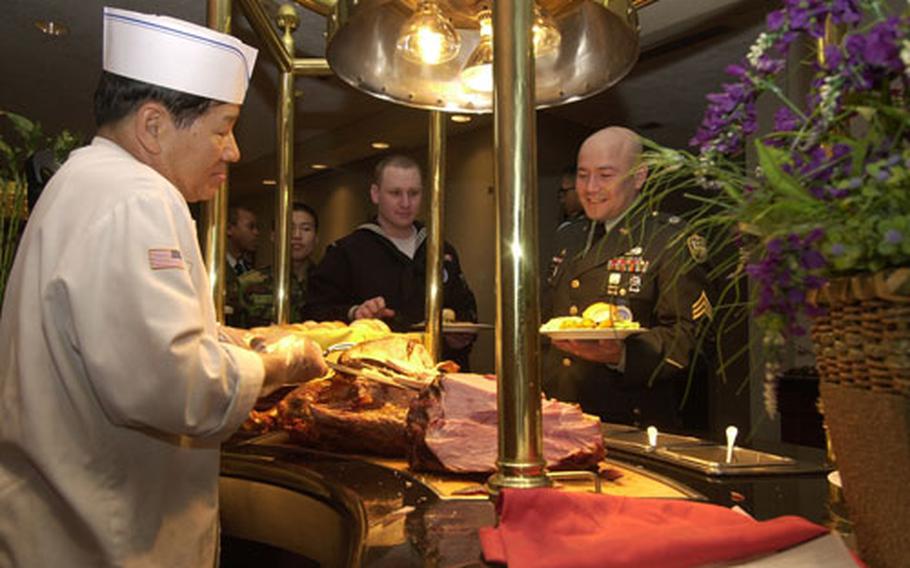 U.S. Army Sgt. Cesar Alvarado, who serves with the United Nations Command’s Military Armistice Commission, waits for a serving of turkey during the USO’s 37th annual “Six Star Salute” on Thursday at Yongsan Garrison, South Korea. Alvarado was one of 80 troops from across the peninsula selected for the two-day program. (T.D. Flack / S&S)

The group &#8212; comprising 39 Americans, 39 South Koreans, one Filipino and one Thai, all of whom serve in South Korea &#8212; began two days of VIP treatment with a Dragon Hill Lodge luncheon sponsored by the American Forces Spouses Club on Thursday.

He told them that every high-ranking officer or noncommissioned officer started at the bottom.

&#8220;Sharing the leadership skills that you have only makes you a better leader, and more importantly, it makes our military strength the best it can be.&#8221;

David Proch, executive director of USO Korea, said the program is a way to pay tribute to the young enlisted troops for their service.

Proch said the attendees were going to tour Seoul on Thursday and be honored a banquet. They also were to visit the Blue House &#8212; South Korea&#8217;s version of the White House &#8212; and the Korean War Memorial.

He said the banquet would be attended by nearly 800 people and provides the USO a chance to raise program funding.