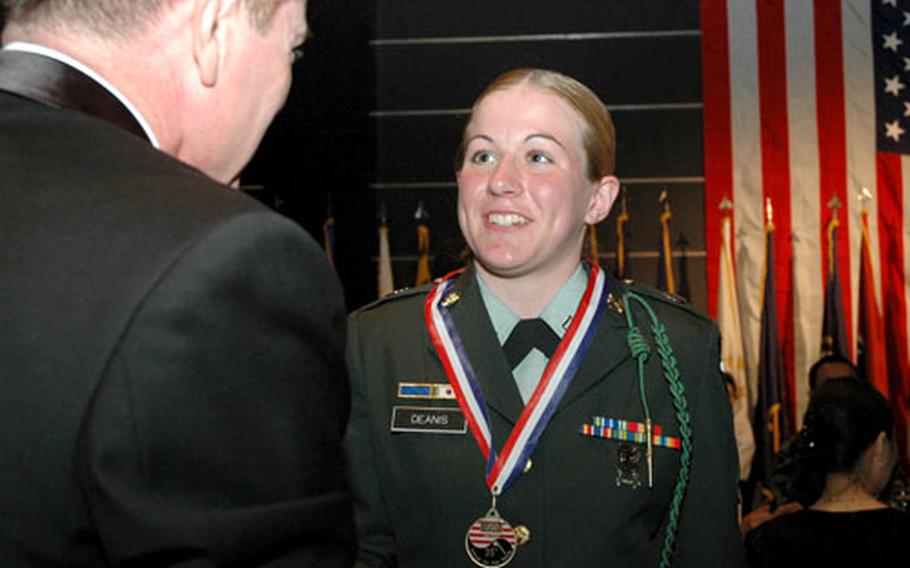 Pfc. Randi Deanis, 20, of Meadville, Pa., accepts her Six-Star medal Thursday night. The USO fundraiser honors junior enlisted soldiers from the United States, South Korea and other countries, treating them like a six-star officer for a night. (Teri Weaver / S&S)

Pfc. Randi Deanis, 20, of Meadville, Pa., accepts her Six-Star medal Thursday night. The USO fundraiser honors junior enlisted soldiers from the United States, South Korea and other countries, treating them like a six-star officer for a night. (Teri Weaver / S&S) 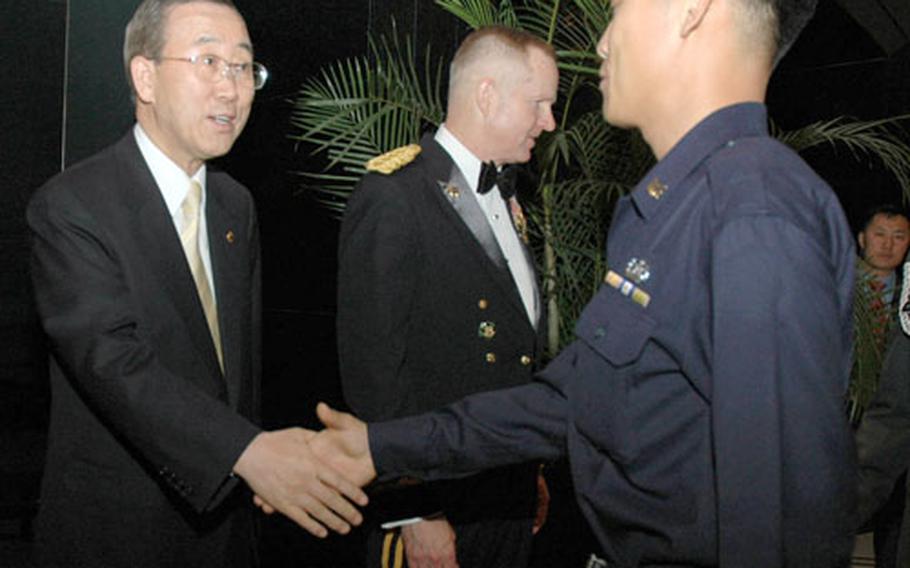 Ban Ki-moon, South Korea&#8217;s minister of foreign affairs and trade, also called the deployment of South Korean troops to Iraq an example of the shared common values and decadeslong alliance between the Republic of Korea and U.S. militaries.

&#8220;I thank you for all that you have done to protect our freedoms,&#8221; Ban told hundreds of U.S. and South Korean military dignitaries and business leaders who gathered to honor 80 junior enlisted servicemembers at the 35th Annual USO Six-Star Salute at the Grand Hyatt.

Each year, the United Service Organizations honors servicemembers from the alliance and from the United Nations Command, treating them as &#8220;six-star&#8221; officers with awards, a black-tie banquet dinner and entertainment.

The event is the local USO&#8217;s main fundraiser each year, with tables sponsored by dozens of businesses and groups, including the Hyundai Development Co., the Korea Exchange Bank, DaimlerChrysler Korea, Asiana Airlines, Lockheed Martin and the Korea American Friendship Society. The amount raised was unavailable on Friday.

As keynote speaker, Ban thanked the foreign servicemembers for serving in South Korea, far from home.

&#8220;I hope you will take back with you the knowledge that what you and your colleagues do is appreciated by all of the Korean people,&#8221; Ban said.

The foreign minister also pledged that the U.S. and South Korean alliance would continue to adapt to the changing challenges of the 21st century. Part of that change, he said, includes the relocation of U.S. forces to an expanded Camp Humphreys in Pyeongtaek. As part of the move, America&#8217;s military forces here will shrink to about 25,000.

South Korean defense ministry officials and local residents in the Pyeongtaek area have clashed over land rights involving this move. The government wants to buy the land from the residents to make way for a larger Humphreys, which is set to triple in size.

Residents and farmers have been protesting for months. In the past few days, farmers began planting their rice crops in the area. If the crop gets to a certain height, the farmers argue, Korean law will support their claim to keep the land.