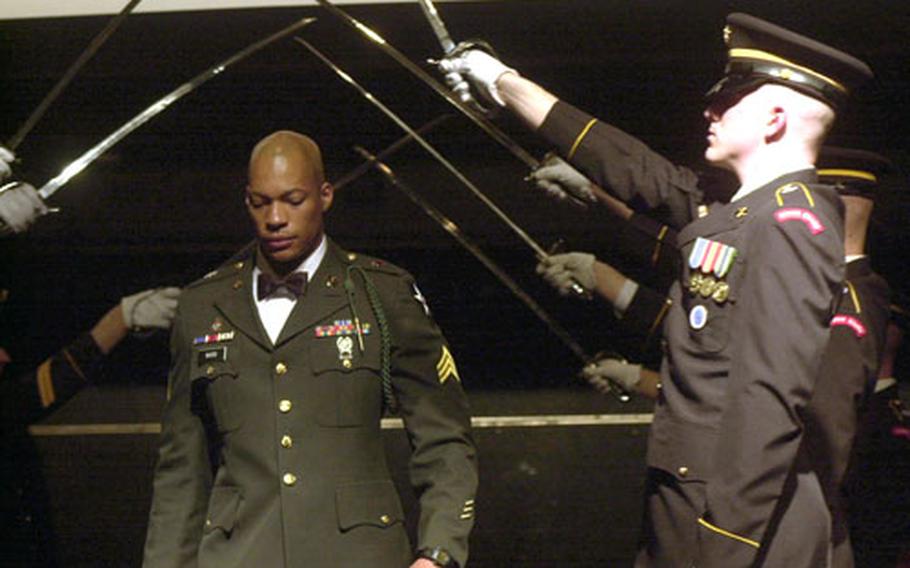 Sgt. Truman V. Ward of the 2nd Infantry Division walks under an honor guard&#39;s arch of swords at the USO&#39;s Six Star Salute Thursday night at the Hyatt Hotel. Eighty servicemembers were recognized for their efforts in South Korea. (Jeremy Kirk / S&S)

SEOUL &#8212; They come from a variety of jobs: pay clerk, interpreter, mortar launcher, scout, office administrator. But these enlisted servicemembers are the ones who shoulder military service in South Korea, a few among thousands who stand ready.

The United Services Organization recognized a handful of those servicemembers Thursday night at the Hyatt Hotel during its 33rd annual Six Star Salute, a gala honoring those in military service. The honorees included 46 Americans, 32 South Koreans, one Filipino and one Thai.

&#8220;Your mission is wanted and appreciated by everyone residing on the Korean Peninsula,&#8221; said John Papazian, co-chairman of the Six Star Salute Committee.

The servicemembers, who came from all branches of the military, filed in through an honor guard&#8217;s arched swords, walking down a long, red carpet and sitting at tables throughout the banquet hall. The honorees then were presented with USO Six Star Salute medals at their tables.