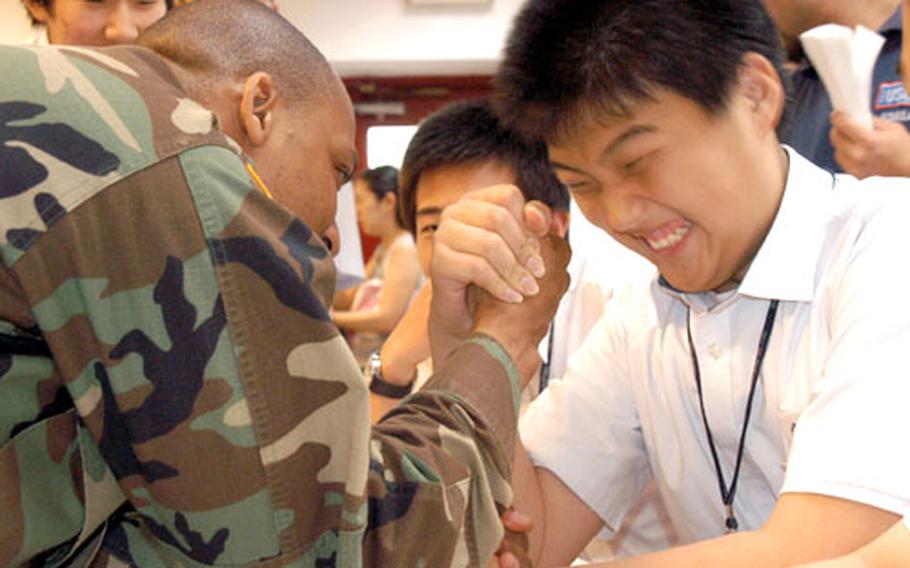 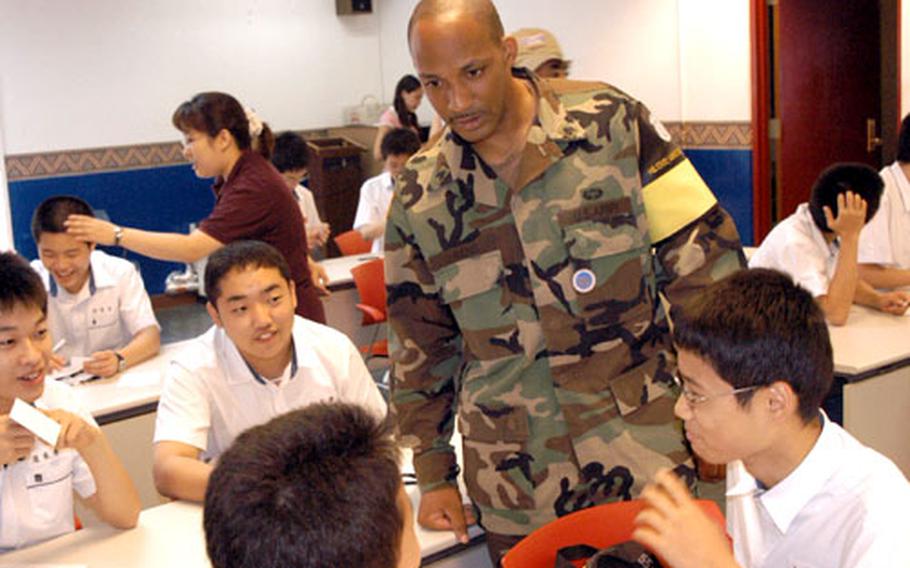 Owens shared burgers, bowled, talked about life and arm-wrestled &#8212; the same sorts of things he would do with his 15-year-old son back home &#8212; with boys from PoongSang High School in Gyeonggi province, who were visiting Yongsan Garrison to learn about the U.S. military.

Owens, who works with the Military Armistice Commission, said being away from his family on a one-year tour gave him the motivation to start volunteering &#8212; and the USO&#8217;s Good Neighbor Program gave him the outlet.

&#8220;I wanted to learn more about the Korean culture and meet the kids and have some fun,&#8221; said Owens, a first-time volunteer with the program, which teaches English at Korean schools and hosts visits to Yongsan.

U.S. Forces Korea started the Good Neighbor Program in 2003 to forge a stronger relationship between the U.S. military and South Korean people. The United Service Organizations began its participation about a year ago, said the USO&#8217;s Chris Beenhouwer, by bringing together American volunteers and South Korean youngsters to foster better future relations. The soldiers also serve as mentors, he said.

Pfc. Kathleen Braunstein of 2nd Infantry Division&#8217;s Multifunctional Aviation Brigade drove about 50 miles from Camp Humphreys to Seoul on Wednesday to hang out with the visiting teens, who were divided into small groups to spend time with the program volunteers.

She said volunteers with the Good Neighbor Program are rewarded by learning about Korean culture and helping to create a positive impression of the U.S. military among South Korean children.

During their visit to Yongsan, the 37 boys from the high school learned about the U.S. military and its plans for transformation on the peninsula from Korean-born U.S. Army Capt. Yosup Shim, community outreach officer for USFK&#8217;s public affairs office.

The boys asked Shim questions such as who is paying for the Army&#8217;s changes in South Korea, how many women are in the U.S. military and why a U.S. soldier would take an assignment to here.

Lee Chung-suk, 17, said he had developed a bad impression of the U.S. military since most media reports he sees focus on the negative.

He was a little nervous about seeing soldiers who, he said, &#8220;have much bigger builds than the Korean people. But [we were] greeted and welcomed by the kind U.S. soldiers.&#8221;

Yoon Keun-ju, also 17, said he liked the soldiers &#8220;because they look so cool. It is indeed a good experience for me to meet [them]. It makes me feel I have to study English harder to better communicate. I realized that the U.S. soldiers are just one of us.&#8221;

The USO is seeking volunteers for upcoming Good Neighbor events in Seoul. Volunteers can sign up to work with elementary students from 12:15 to 4 p.m. on July 28 or 29.

Volunteers also are needed for a special free all-day Good Neighbor trip to Gangwha Island on July 27. A high school there has invited soldiers and other volunteers to visit and see the island.

Call Chris Beenhouwer at 724-7781, for information about volunteering.