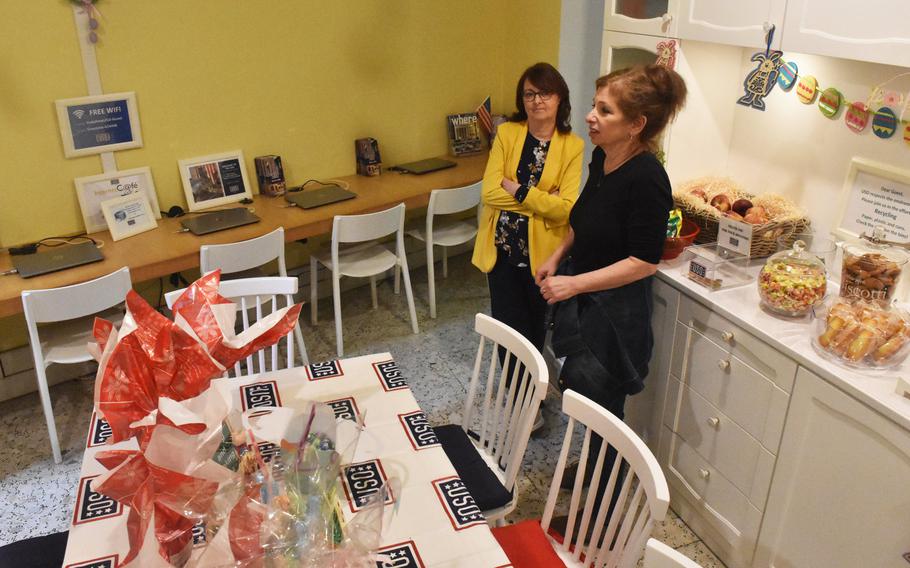 Donna Cafaro, right, a program coordinator, chats with visitor Sandra Cenci on April 25, 2019, at the USO Rome center, which will close on June 3, 2019, after more than 70 years. (Scott Wyland/Stars and Stripes)

Donna Cafaro, right, a program coordinator, chats with visitor Sandra Cenci on April 25, 2019, at the USO Rome center, which will close on June 3, 2019, after more than 70 years. (Scott Wyland/Stars and Stripes) 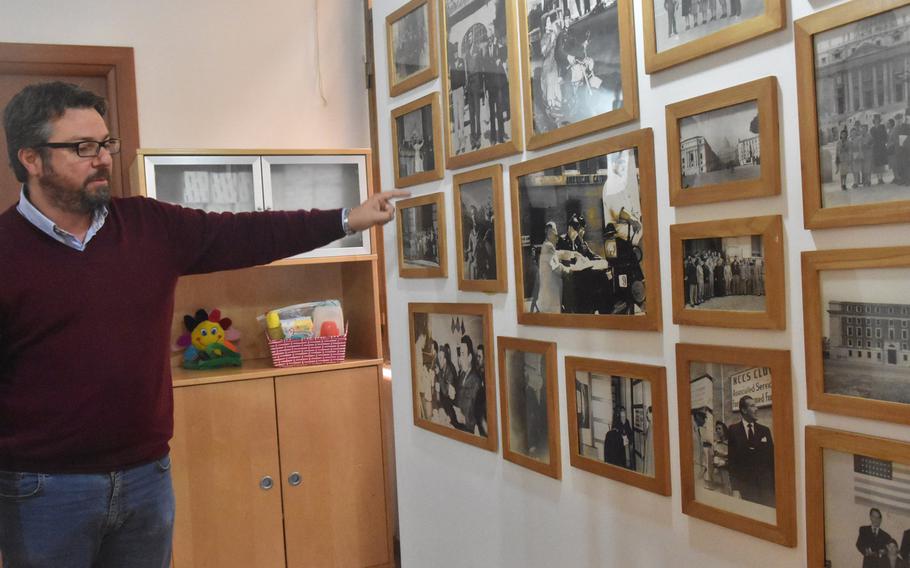 Cristiano Formicola, a program coordinator, points to a photo of Pope Pius X11 on April 25, 2019, at the USO Rome center. The pope and Gen. Mark Clark, who led U.S. ground forces into Rome in 1944, agreed to start a club that later became Europe's first USO center. (Scott Wyland/Stars and Stripes) 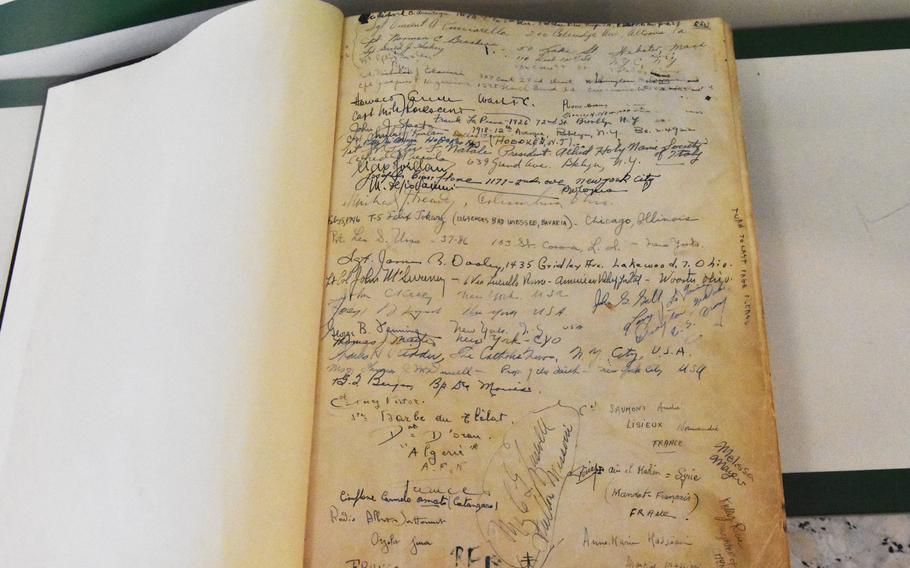 The names of the very first servicemembers to visit the USO Rome center are scribbled here on this guest book page. The exact date is unknown, though it was sometime in the late 1940s. (Scott Wyland/Stars and Stripes) Donna Cafaro, left, gives directions to a customer at the Rome USO in October 1998. (Stars and Stripes)

ROME — In the street outside the USO center near St. Peter’s Square, crowds celebrated Italian Liberation Day, but the mood inside was somber among staffers who recently learned the facility will close after more than 70 years of operation.

The jubilant holiday fests in late April were a bittersweet reminder of the center’s history, which dates to shortly after Allied forces liberated Rome in 1944.

It’s expected to shut its doors for good on June 3, just two days shy of the date Allies entered the city 75 years ago in a campaign to liberate the country, a precursor to the D-Day invasion of France’s Normandy region.

The center — USO’s first in Europe — has seen steadily declining use in recent years, and its closure comes as the USO shifts focus to meet the needs of the changing military population, officials said.

“We have to use our donors’ money in the most efficient way,” said J.D. Crouch, the organization’s chief executive.

But some who have visited Rome over the years said they hoped officials would reconsider the closure there.

“The ability to meet at a USO facility and share experiences with other military members abroad enhances the experience and gives members a base of operations,” said Facebook user David Muenkel in a recent comment calling for the decision’s reversal.

For more than 70 years, the Rome center has served countless servicemembers and veterans, offering a friendly stop in a foreign city, where the staff has helped book tours and hotels or recommended restaurants and sights to see.

Black-and-white photos hanging on one of the center’s walls show Gen. Mark Clark, who led the Fifth Army into Rome in 1944, and Pope Pius XII. The two had agreed to start a Catholic club in Vatican City to help keep soldiers off the streets and out of trouble.

Shortly thereafter, it became a USO “canteen” and has remained in Vatican City, although it has changed locations over the years.

Employee Cristiano Formicola flipped open an original guest book to a yellowing page on which the first visitors scrawled their names in the late 1940s.

Over the years, it’s gotten visits from four-star generals and celebrities, such as actor Gary Sinise, who dropped in during a USO tour 10 years ago.

Denise O’Sullivan, a Facebook user who commented on an announcement of the closure, was one of dozens who said it had been a haven for her.

“Your staff helped a stranded young Navy wife (me) in 1983 while traveling to meet her hubby for R&R in Gaeta,” she said. “I will always remember their kindness.”

Many visitors now are older servicemembers and veterans who come in for nostalgic reasons, said Donna Cafaro, who has worked at the center for 23 years and recently spoke to a visitor who said he’d stopped in back in 1977.

Nestled in a small office on Via Vespaisano, like many modern USO centers it boasts amenities such as free snacks and comfy chairs, as well as laptops and free Wi-Fi.

But in other ways it’s an anomaly, said Walt Murren, USO’s European regional vice president. It serves no local military community of its own — the nearest U.S. base in Naples has a separate USO center. Rome is also the organization’s only site in Europe that sells paid tours, while USO is phasing out services that charge fees and focusing on assisting servicemembers at no cost, Murren said.

And the center, which saw its busiest years in the pre-internet age, can’t compete with online hospitality services. It’s seen yearly declines in foot traffic of about 15% to 20% since at least 2015, Murren said.

“It’s a hard decision to make because it has the heart strings attached to it,” he said. “We don’t hold onto a center that’s on a downward trend just because it’s a legacy.”

Some critics of the decision, however, say the center could serve a new generation of servicemembers if it were better promoted.

It could serve as a “test bed for experimenting with new ideas to increase the USO’s relevance at a time when the military is undergoing significant change and the need for overseas support may be greater than ever,” Muenkel said in his Facebook review.

But officials say the closure doesn’t reflect the overall health of USO, which has grown from 160 locations worldwide to 230 in the past eight years and is already adapting its mission with the times.

Founded in 1941 in response to President Franklin D. Roosevelt’s request to create morale-boosting and recreational activities for servicemembers, USO is perhaps best known for its celebrity concerts and tours featuring the likes of Bob Hope in World War II or, more recently, Toby Keith.

“But we’re much more than entertainment,” Murren said. In recent years, it has expanded and diversified its services to include career counseling, networking for spouses and guidance for those leaving the military.

“We try to adapt to the way the military is changing,” Crouch said. “We’re trying to find other ways to help servicemembers all along the journey.”

One way is to be more family-oriented, Crouch said. USO now hosts everything from baby showers to children’s activities to social events for spouses.

The organization is also more expeditionary than ever, he said. It transports care packages and temporary day rooms to wherever the troops are, whether it’s Romania, Djibouti or deep in Afghanistan, outfitting tents with games, TVs and Wi-Fi devices so troops can unwind and video chat with their families.

And tax filings indicate its finances are strong, with annual contributions hovering between about $130 million and $140 million in recent years, up from a decade ago when they barely broke $105 million in 2009.

Though it’s closing its first Europe center, in the past four years it has opened new centers on bases in Germany, Spain, Sicily and Turkey, Murren said.

USO will open a center in Baumholder, Germany, this summer, and is considering one in Poland, where the U.S. is building a military presence.

Still, news of the impending closure in Rome drew more than 100 comments on its Facebook page lamenting the decision or expressing gratitude for help they received as far back as the 1970s.

“We’re very happy that customers remember what we did for them. It means we did a good job,” said Formicola, the employee in Rome. “They always found a home away from home.”