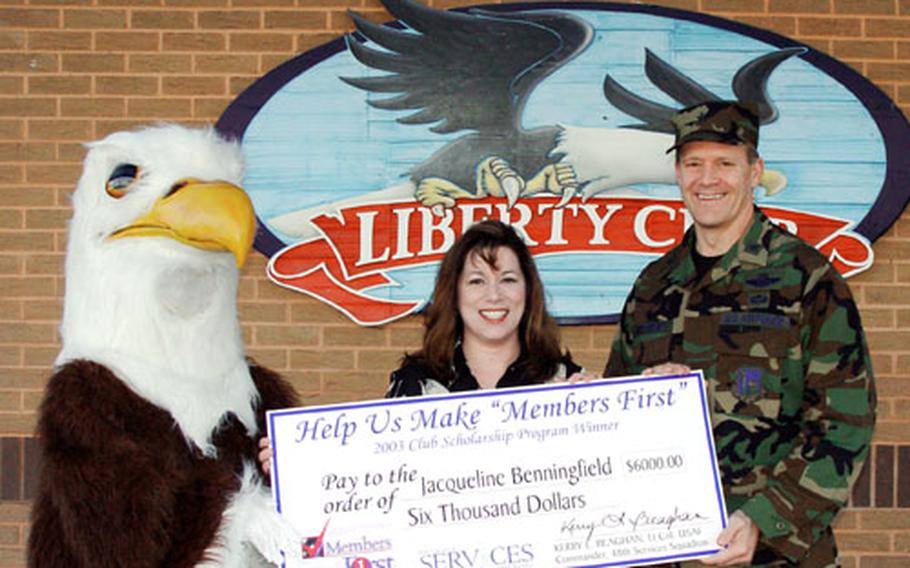 Jacqueline Benningfield (center) received a $6,000 scholarship for her essay extolling the virtues of her local Air Force Club. ()

The USO recently honored the best junior enlisted U.S. and German troops in the European theater.

The honorees were wined and dined among dignitaries at the 12th Annual USO Service Salute earlier this month at the Kurhaus in Wiesbaden, Germany.

&#8220;The Germans use the event unofficially to send a message,&#8221; said Gail Camillo, USO Europe Regional Director. &#8220;It transcends current political discussions, if you will.&#8221;

The USO asks the senior enlisted adviser for each theater service branch to select outstanding junior enlisted troops for the honor. The criteria is left to the branch.

Part of the idea is to get troops and locals to interact.

Karlheinz Weimar, finance minister of Hessen, was one of the guests. So was Manfred Rommel, former mayor of Stuttgart and son of the World War II German field marshal.

&#8220;We also work very closely as one of our goals ... is to integrate servicemembers into their local communities, to understand their host country and gain confidence,&#8221; Camillo said.

This year&#8217;s event was combined with a 60th anniversary celebration for the American Forces Network Europe. An earlier celebration had been postponed from spring because of the war in Iraq.

Honorees for the U.S. military are:

Honorees for the German military are: