USO helps Korean spouses prepare for life in the U.S. 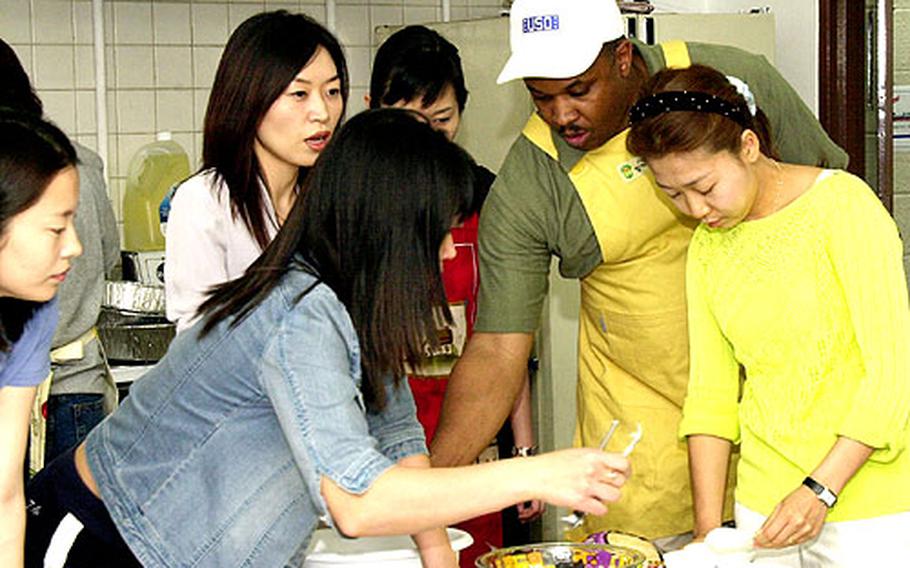 CAMP KIM, South Korea &#8212; Pfc. Woodrow Cole and his wife, Sun-kyung, have been married for just more than two months.

In a little less than a year, he will rotate out of his current assignment with the United Nations Color Guard at Yongsan Garrison and return to the United States.

His wife, who never has lived outside of South Korea, will go with him. To help ease the transition, the couple enrolled in the United Service Organization&#8217;s Cross-Cultural School, a program offered twice a year to help foreign-born spouses of U.S. soldiers deal with the challenges of living in a new country.

The class, to be offered again in October, kicked off May 10 with an introduction to cultural and behavioral differences between the United States and South Korea, and a lesson on American holidays, customs and traditions.

Two weeks later, the program finished with a presentation from a U.S. Embassy official on the ever-confusing immigrant and non-immigrant visa and citizenship process.

But surprisingly, the most popular class, attendees said, was the cooking portion, in which a USO instructor taught the spouses how to make popular Western dishes.

&#8220;The cooking was the most interesting. I love lasagna, so learning how to cook that was the most fun for me,&#8221; said Sun-kyung. She and her husband learned of the class through the monthly calendar the USO distributes and decided to sign up.

Throughout the two weeks, various guest speakers and experts talked to the approximately two dozen participants about several subjects including job interviews and writing a resume, banking, how to find a house or apartment, education and military lifestyles.

According to the Chaplain Family Life Center, about 1,000 &#8220;cross-cultural&#8221; marriages occur each year between U.S. soldiers or civilians and non-American-born spouses in South Korea.

The vast majority, officials said, are between Korean women and American men. That figure pales in comparison to the estimated 4,000 cross-cultural marriages that occurred each year during the 1970s but it&#8217;s still significant.