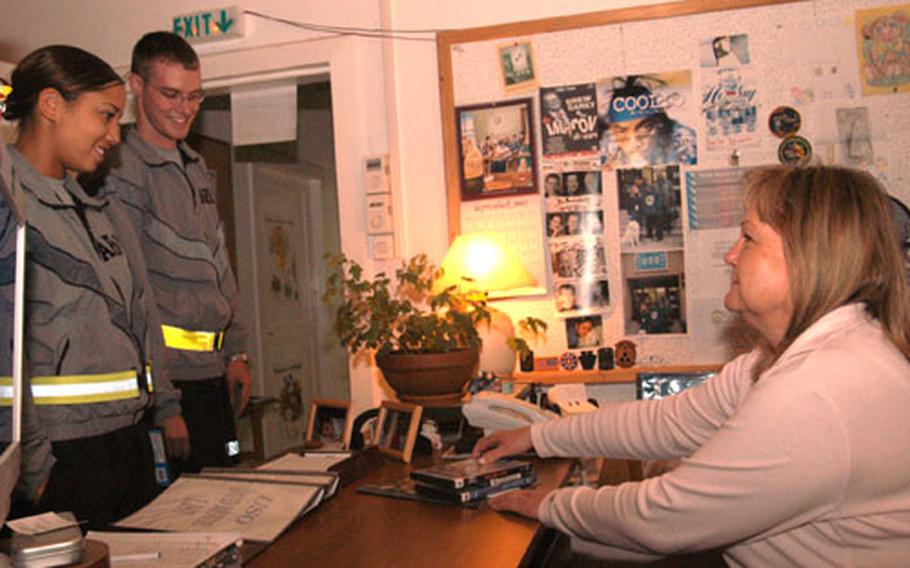 Linda Lorenzana rents out a DVD to soldiers stationed at Eagle Base, Bosnia and Herzegovina. She runs a United Services Organization center at the base where troops can watch movies, browse the Internet, read books and magazines, all in a cozy living room-like atmosphere with couches, warm lights and homemade treats. Lorenzana puts in 10- to 13-hour workdays to create a home away from home for the soldiers. (Ivana Avramovic / S&S)

Linda Lorenzana rents out a DVD to soldiers stationed at Eagle Base, Bosnia and Herzegovina. She runs a United Services Organization center at the base where troops can watch movies, browse the Internet, read books and magazines, all in a cozy living room-like atmosphere with couches, warm lights and homemade treats. Lorenzana puts in 10- to 13-hour workdays to create a home away from home for the soldiers. (Ivana Avramovic / S&S) 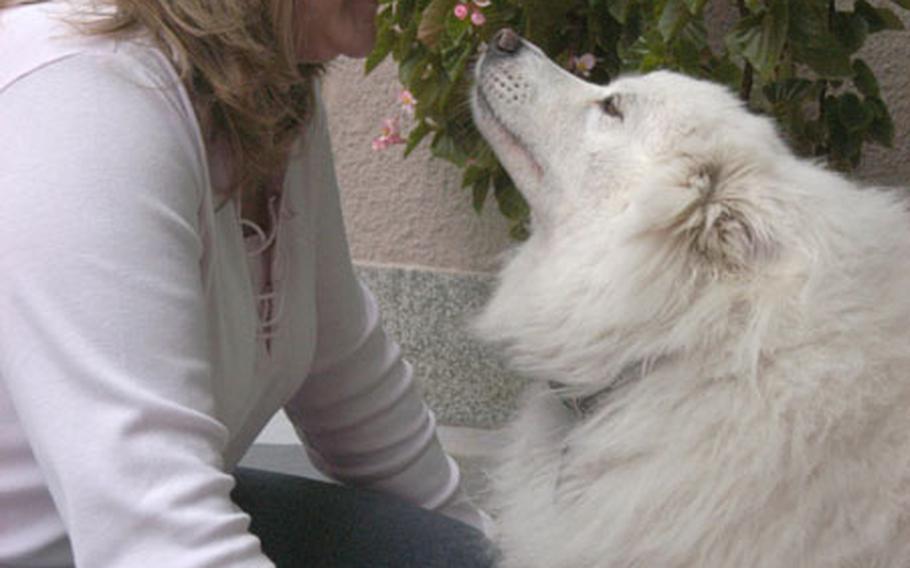 EAGLE BASE, Bosnia and Herzegovina &#8212; Finding a home away from home on a six-month deployment is easy if Linda Lorenzana is around.

Lorenzana runs the United Services Organization center at Eagle Base, where soldiers can browse the Internet, watch movies, read books and magazines, or just relax.

But she does more. She bakes cookies and brownies, makes sandwiches, plays movies for troops and lends an ear when needed. She goes beyond the call of duty to make everyone feel comfortable.

&#8220;I tell everybody this is where they need to go because she makes it homey,&#8221; said Maj. Nancy Sweet-Fitzgibbon of Task Force Med Eagle.

Lorenzana, 56, puts in long hours welcoming the soldiers to the center from 10 a.m. to 11 p.m. on weekdays and cuts her workday to 10 hours a day on weekends.

&#8220;This is the kind of job where you really have to really like the soldiers and love working with them.&#8221;

Making friends has been easy, but seeing them leave when their six-month rotation ends has not.

&#8220;The hardest is when they leave. I get close [to soldiers from the new rotation] and then they leave again,&#8221; Lorenzana said.

Lorenzana&#8217;s service started in 1997 when her Army son, stationed in Germany at the time, invited her to celebrate her 50th birthday in Europe.

She stayed and got her first job with the USO, and soon after moved to Taszar, Hungary, to run its one-person office.

After a lot of convincing of the military that Eagle Base needed a similar place, the office moved there in October 2002.

&#8220;It is a cozy place that feels like a home and [where troops] kind of escape from military for an hour or two, basically pretend like it is home,&#8221; Lorenzana said.

She has worked hard to make it that way. Many soldiers have watched Super Bowl games, spent Christmas Eves exchanging gifts, indulged in homemade treats and participated in poetry and photo contests that Lorenzana organized.

She has introduced a Ladies Night to the base military life, an evening of pampering &#8220;just to let the female soldiers feel like a lady again, feel like a woman for a night.&#8221;

She brought young Bosnians to the base for a haunted house and trick-or-treat goodies to make sure the soldiers get to spend time with children on Halloween.

And together with Morale, Welfare and Recreation, Lorenzana has organized Easter picnics in the park, egg hunt, three-legged and sack races, egg toss.

Lorenzana&#8217;s friendly Samoyed, Sasha, has become a part of the base life &#8212; sitting on the steps at the entrance of the center when not playing with soldiers or participating in Stress Control Center&#8217;s pet therapy.

And while it is common to have volunteers keep the USO open at other bases in Europe, Lorenzana does most of the work at Eagle Base.

She uses her lunch break to exercise and rushes back to the office with a bagged meal.

Her four children have asked her to return home, but helping the soldiers through their deployment is worth being away from family and giving up little luxuries of civilian life in the States.