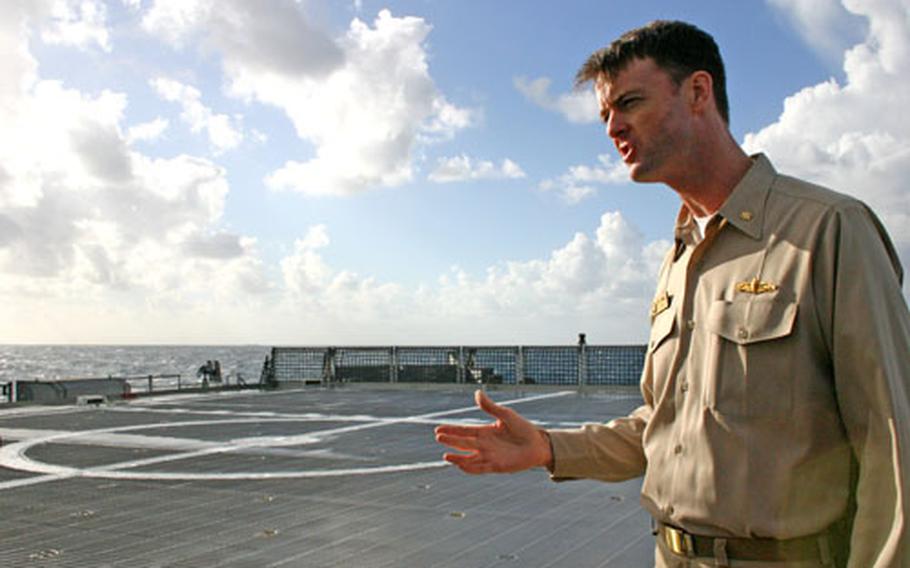 Lt. Cmdr. Phil Pournelle, executive officer of the Swift, stands on the flight deck of the high-speed vessel. One of three leased catamarans in the Navy’s fleet, the ship can carry a maximum of three helicopters. (Sandra Jontz / S&S)

Lt. Cmdr. Phil Pournelle, executive officer of the Swift, stands on the flight deck of the high-speed vessel. One of three leased catamarans in the Navy’s fleet, the ship can carry a maximum of three helicopters. (Sandra Jontz / S&S) 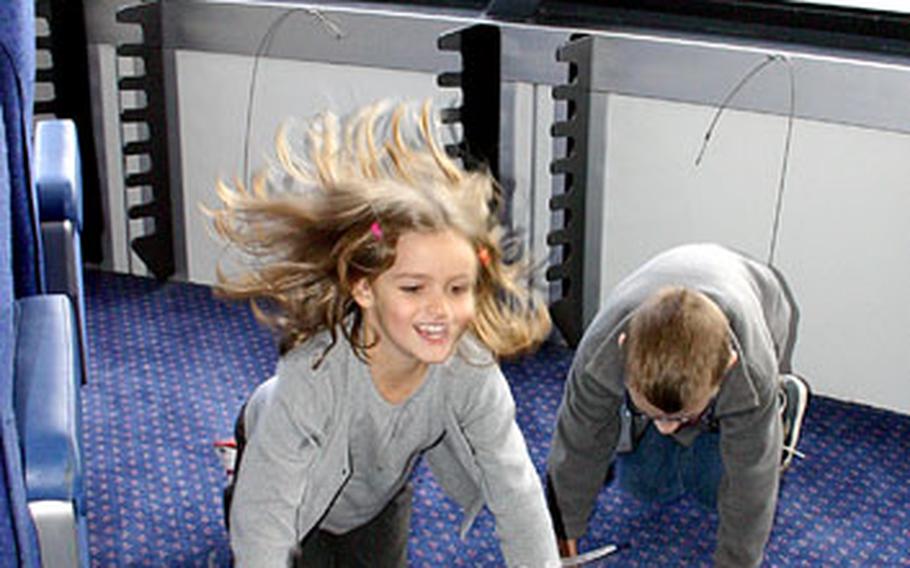 “This is fun. It tickles your stomach,” said 8-year-old McKenna Hickox, as she and Alex Litt, 8, jump with each pitch and roll the high-speed vessel USNV Swift made while navigating 6-foot and 9-foot swells in the Bay of Gaeta on Tuesday. Some sailors were able to bring families onboard to see the catamaran in action. (Sandra Jontz / S&S) 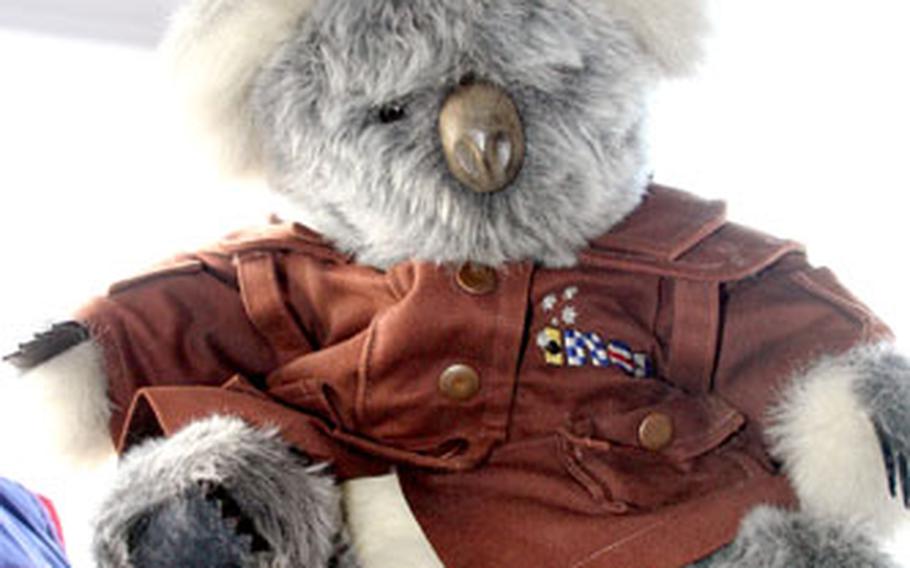 “Clancy,” a stuffed koala that serves as the USNV Swift’s mascot, has been around the world — twice. (Sandra Jontz / S&S)

During her four-month deployment aboard the U.S. Navy Vessel (USNV) Swift, she both navigates and orders ship supplies, though usually not at the same time.

Cormier and the other 41 sailors of the high-speed vessel are what the Navy hopes is the future for its sailors.

&#8220;They are fulfilling their main job and fulfilling other jobs to fulfill the mission,&#8221; Master Chief Petty Officer Anthony Evangelista, fleet master chief for U.S. Naval Forces Europe/6th Fleet, said recently as the catamaran made a demonstration run into choppy waters in the Gulf of Gaeta, Italy.

The vessel, leased by the Navy, is just about fully automated, from the navigation to maneuvering systems, said executive officer Lt. Cmdr. Phil Pournelle.

The Swift, one of three high-speed catamarans in the Navy&#8217;s fleet, also serves as the test platform as the Navy continues to work on its much awaited new class of warship, the Littoral Combat Ship, or LCS, said the ship&#8217;s skipper, Navy Capt. Rob Morrison.

The Navy needs a vessel that can move equipment rapidly and reach &#8220;green water&#8221; areas that are closer to shore and usually shallow.

&#8220;This vessel is an example of a ship that can do both,&#8221; Morrison said, equating it to a C-17 or C-5 transport aircraft, which are logistical in nature rather than tactical. It can carry about 500 tons of cargo, from a dozen M1A1 tanks, for example, to SEAL team boats or pallets of humanitarian aid.

The high-speed vessel, with its shallow draft, is affectionately known by its crew as &#8220;the vomit comet.&#8221; For those on board who are unaccustomed to feeling each and every pitch and roll of the sea, getting seasick is common.

&#8220;We get you there fast and hungry,&#8221; joked Chief Warrant Officer 2 Dan Trevino while manning the bridge as the chief engineer.

But that&#8217;s the beauty of the vessel &#8212; its speed and ability to navigate in shallower waters are assets that provide the Navy with &#8220;tremendous flexibility and tremendous opportunity,&#8221; said Navy Capt. Tom Rowden, commanding officer of Combined Task Force 65, the operational command for ships in the Navy&#8217;s 6th Fleet area of responsibility.

The Swift recently was used in the biennial West African Training Cruise. It was able to sail up rivers and closer to shores, going beyond the traditional deep &#8220;blue water&#8221; the Navy is used to, Rowden said.

The Swift also provided relief after the devastating Indian Ocean tsunami and in the aftermath of hurricane Katrina as it was able to get into ports inaccessible to other ships.

The ship itself, built by the Australian shipbuilder Incat, has no homeport. The crews assigned to the Swift are part of the Navy&#8217;s Sea Swap concept, a program in which vessels are left out to sea while the crews are swapped in and out. Swift crews hail from either Little Creek, Va., or Ingleside, Texas, and serve four-month deployments.

The Swift will remain under the Navy&#8217;s 6th Fleet command until about March, conducting operations and exercises, officials said.