A crane is used to load supplies onto the U.S. Navy hospital ship USNS Comfort. The ship stopped in Rota this weekend to get supplies before heading to the Middle East. (Courtesy of Petty Officer 2nd Class Timothy Comerford)

A crane is used to load supplies onto the U.S. Navy hospital ship USNS Comfort. The ship stopped in Rota this weekend to get supplies before heading to the Middle East. (Courtesy of Petty Officer 2nd Class Timothy Comerford) 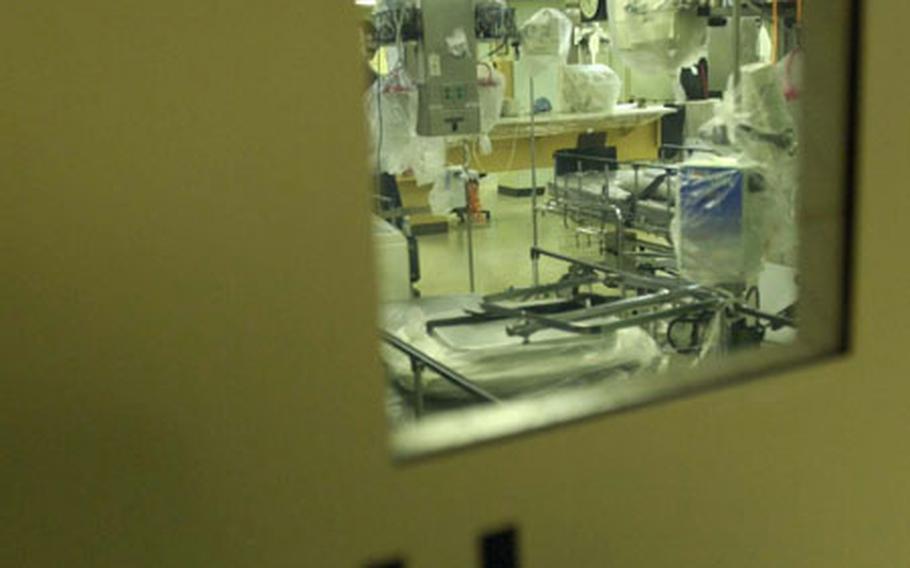 NAVAL STATION ROTA, Spain &#8212; If the U.S. military takes on heavy casualties in a war with Iraq, injured troops will have an 894-foot floating hospital ready to patch them up.

The USNS Comfort, a 1,000-bed hospital ship, is heading to the Middle East to preposition itself for the possibility of war.

The ship arrived in Rota on Friday with a crew of about 300 after leaving Baltimore on Jan. 6. The deployment is yet another sign that the United States is ready to militarily take on Iraqi leader Saddam Hussein.

Comfort crewmembers planned to spend the weekend in port loading medical supplies, making sure the ship is fully stocked. Sailors used their time in Rota on Friday evening to pick up some personal items on base, have dinner out in town and pick up their mail for what could be the last time in weeks.

&#8220;People have been very busy because we have to get everything ready now,&#8221; said Petty Officer 2nd Class Ellen Maurer, a Navy photojournalist deployed with the ship.

&#8220;There&#8217;s a lot of cleaning that goes into any ship, especially a hospital ship, so that we can take on potential patients and keep them in a clean environment. There are an awful lot of supplies that need to be on a hospital ship besides what a normal Navy vessel needs. This ship needs a lot of stuff.&#8221;

Maurer is among the more than 220 Navy personnel and 60 civilians who left with the ship earlier this month.

If needed, the Navy could send more doctors, nurses and medical assistants to the ship to care for casualties.

The current medical staff aboard is drawn from Navy military hospitals across the East from Pensacola, Fla., to Bethesda, Md. They got their deployment orders a week before departing Baltimore.

The ship has some of the same medical equipment you&#8217;ll see at any hospital, from Cat scanners to X-ray machines.

However, performing surgery can be much different aboard a ship. During rough seas, operations can be tricky. It takes a steady hand.

To keep things from moving, equipment is screwed into the decks of the ship and some items can be tethered to the floor. During surgeries, the commander slows down the ship and uses water to try and balance the ship and prevent it from rolling too much.

Crewmembers are hoping they won&#8217;t have to perform too many operations, but they say they are ready if needed.

Maurer, who was still in junior high when the 1991 Gulf War started, said she&#8217;s not nervous about where she is going. She is more concerned about her bills and that everything is taken care of at home while she is gone.

Petty Officer 2nd Class Juan Rivera, a Navy security officer, said leaving his wife and three children was difficult. In the past year and a half, he has been at his home in Bethesda for a total of only two months. The Navy has sent him on temporary duty assignments to the Middle East and Guantanamo Bay, Cuba, where the U.S. military is keeping al-Qaida and Taliban detainees.

Rivera is part of a small cadre of sailors tasked with protecting the ship from a terrorist attack.

The Comfort is no stranger to the Middle East or terror. The converted tanker ship was there in 1991 during Operations Desert Shield and Storm.

Crewmembers are heading to the Middle East this time not knowing when they&#8217;ll return home. The deployment orders are indefinite. Many sailors have mixed emotions.

&#8220;And I feel much more comfortable &#8212; should anything happen in the future with Iraq or anyone else &#8212; knowing that there is a world-class large medical health care facility like the Comfort that is ready to be there right next to the action.&#8221;