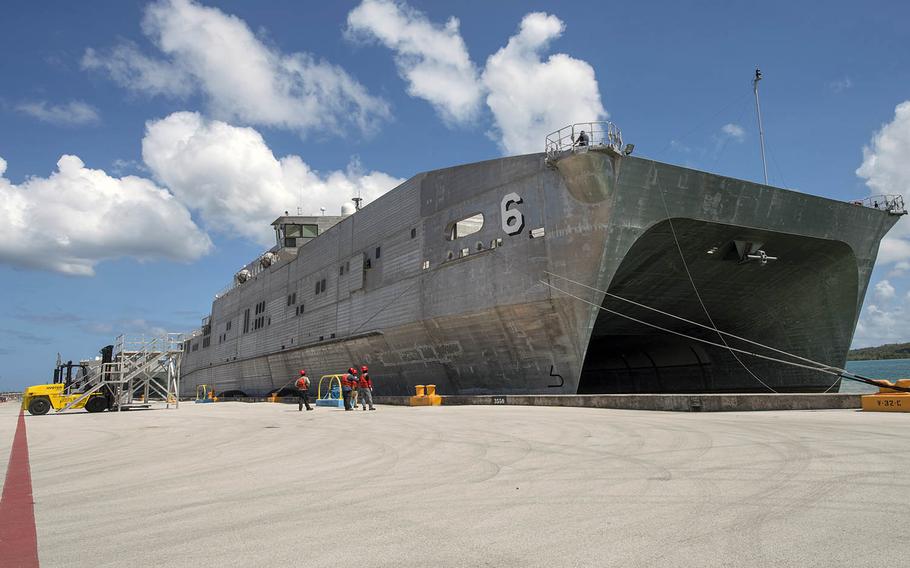 Two Navy expeditionary fast-transport ships steamed out of Guam this week to kick off Pacific Partnership, an annual mission focused on disaster preparedness and humanitarian assistance throughout the Pacific.

During the mission, the USNS Brunswick and USNS Fall River will travel to seven nations, according to an email to Stars and Stripes from Task Force 73 spokesman Lt. Cmdr. Sean Riordan.

“Pacific Partnership is about building trust and sharing knowledge,” Rear Adm. Joey Tynch, Task Force 73 commander and the mission’s executive agent, said in a Navy statement. “This mission shows that the U.S., our partners and hosts are working together to making this region better prepared for disaster response.”

Past Pacific Partnership missions, which have lasted up to 150 days, brought together military medical professionals from several nations to work together and provide health care in Pacific countries. Last year, for example, the USNS Mercy, a hospital ship, visited Indonesia, Sri Lanka, Malaysia and Vietnam, where its crew provided medical, dental and public health services.

That mission has changed over the years to focus less on providing direct care and more on strengthening relations with other nations by exchanging subject-matter experts and other personnel, which is reflected by the absence this year of a hospital ship, according to the statement.

The Brunswick and Fall River, both part of Military Sealift Command, allow relief planners to conduct operations from small or damaged ports. The Navy operates 10 of the ships, first delivered in 2012 by Austal, according to the Australian shipbuilder’s website.

The vessels are designed to quickly transport equipment and personnel, according to the Navy. Fast transports have shallow drafts, 20,000-square-foot bays and a flight deck that accommodates the CH-53 Sea Stallion helicopter.

More than 500 personnel from the United States, Japan, Australia, Canada, Malaysia, Peru, the Philippines, South Korea, Thailand and the United Kingdom are participating in Pacific Partnership 2019, according to the Navy statement.

The mission was sparked by the December 2004 tsunami that devastated parts of South and Southeast Asia after a 9.1 magnitude earthquake struck off the coast of Indonesia.