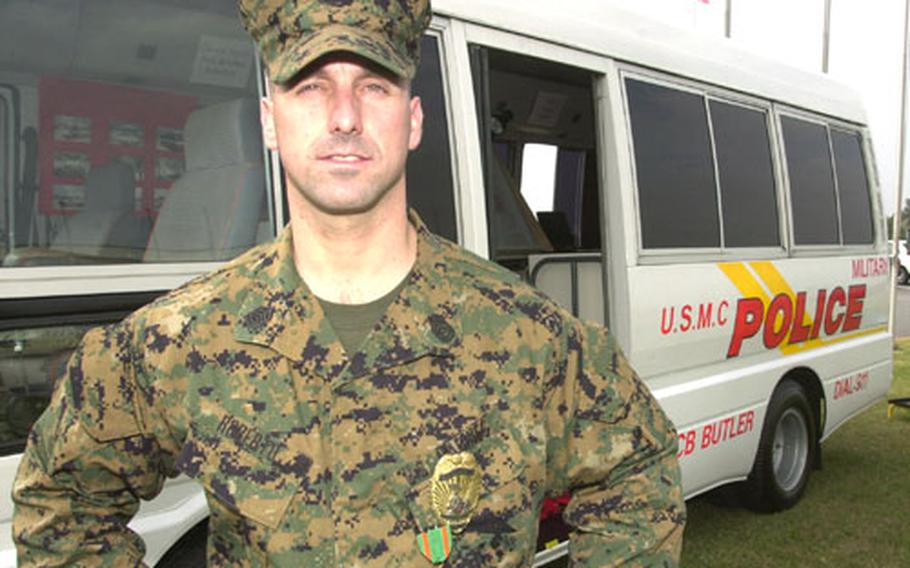 The Provost Marshal&#8217;s Office unveiled a new Mobile Command Post here Wednesday, a vehicle that lets them take law enforcement to every end of Okinawa.

It&#8217;s a small school bus that was saved from the scrap yard and converted for police use. It&#8217;s got everything from an on-board computer to flashing red lights.

&#8220;With a population as large as ours, we need the capability to coordinate emergency response,&#8221; said Lt. Col. Kevan Kvenlog, Provost Marshal for Marine Corps Bases in Japan.

The Mobile Command Post will serve three roles on Okinawa. It will be an on-scene coordination point for emergency response as well as a mini-headquarters for large events, such as when bases host open houses or festivals.

It also will be part of the military police campaign to curb drunken driving. Just one week ago, the Mobile Command Post augmented Kadena&#8217;s Security Police in conducting sobriety checkpoints at the gate.

The idea started last March with not much more than a few thoughts of how to make law enforcement and emergency response run smoother. Gunnery Sgt. James Roberto, the staff noncommissioned officer in charge of training for military police, got the daunting task of building the new vehicle from the ground up.

Roberto found an abandoned school bus that was taken off the road in 1997. It was nearly falling apart and resembled the type of vehicle the military police were trying to keep off the roads.

Roberto started to pool assets. Facilities Engineering on the base worked on the bus&#8217; interior, replacing worn rows of seats with cabinets for equipment.

The base motor pool got the engine running again, and the base communications section installed radios.

Global positioning systems tell military police exactly where they are. Internal police radios are linked to patrol cars and base headquarters, and an ultra-high frequency radio lets military police talk to helicopters for search-and-rescue missions. There&#8217;s even an on-board Intoxilyzer to measure blood-alcohol content at checkpoints.

Still, the Mobile Command Post is only an interim fix. Military police are still learning the best way to use the small bus and what needs to be added to make it work for all law enforcement and emergency roles.

Kvenlog hopes to incorporate those lessons into a more permanent vehicle in the next couple of years.