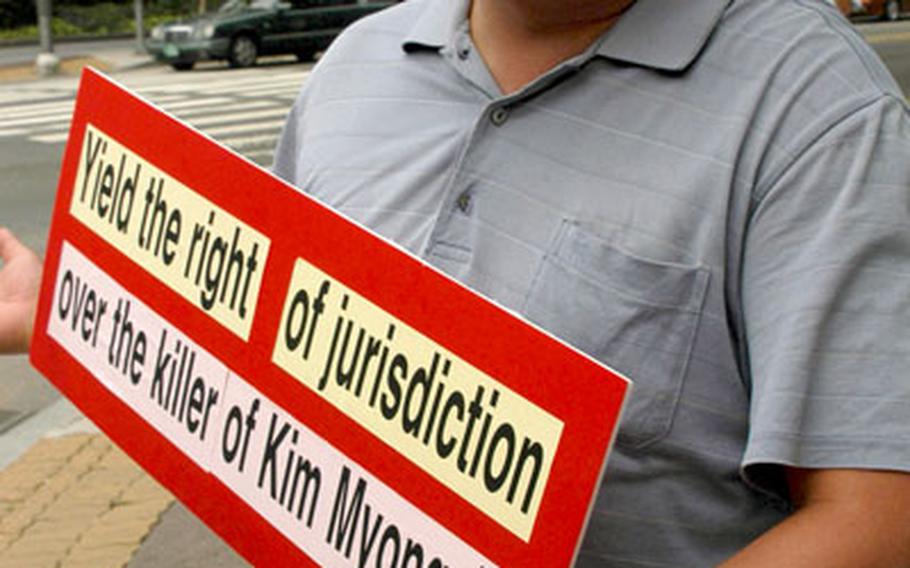 Kang Hong-gu, 39, a leader of a civic association in Dongducheon, talks Tuesday afternoon about why he believes South Korea should have criminal jurisdiction in an incident in which a South Korean woman was killed. Kim Myong-ja, 51, was killed June 10 when a U.S. military truck driven by a U.S. soldier struck and killed her. (Teri Weaver / S&S)

Kang Hong-gu, 39, a leader of a civic association in Dongducheon, talks Tuesday afternoon about why he believes South Korea should have criminal jurisdiction in an incident in which a South Korean woman was killed. Kim Myong-ja, 51, was killed June 10 when a U.S. military truck driven by a U.S. soldier struck and killed her. (Teri Weaver / S&S) 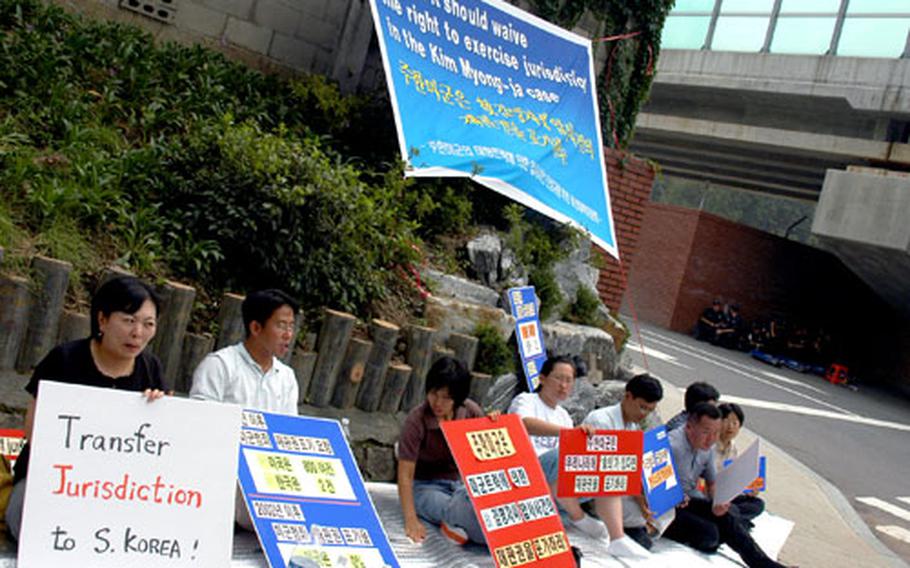 A small group of protesters sits in front of Gate 10 at Yongsan Garrison. (Teri Weaver / S&S)

YONGSAN GARRISON, South Korea &#8212; U.S. Forces Korea on Tuesday declined a request from the South Korean government for criminal jurisdiction in the case of a U.S. soldier who was driving a military truck that struck and killed a South Korean woman in June, according to USFK.

Instead, the investigation of the case will remain within the U.S. military justice system, USFK spokesman David Oten said.

On June 10, Kim Myung-ja, 51, walked across a street in Dongducheon while Bryant sat at a traffic light in a 2.5-ton Army truck. A passenger in the truck spotted the woman crossing the street, but Bryant failed to hear his passenger&#8217;s warnings before moving, according to the South Korean police, who initially investigated the accident.

Bryant was on duty at the time of the accident, according to USFK. Under the Status of Forces Agreement between the United States and South Korea, the U.S. military adjudicates when American troops are accused of crimes committed while on duty.

The victim&#8217;s family has told Stars and Stripes they believe it was an accident. They also said they hope that the incident would not draw protests and attention.

Nonetheless, not everyone will be happy with USFK&#8217;s decision Tuesday.

This week, a small group of protesters have been sitting outside Gate 10 of Yongsan Garrison to ask USFK to consider handing over jurisdiction to South Korea. They had pledged to sit outside the gate until Thursday, or as soon as USFK made a decision, according to Kang Hong-gu, 39, a leader of a Dongducheon civic association.

On Tuesday afternoon, Kang said he believes that USFK should consider letting the case be investigated by his own government.

He argued that USFK often asks South Korea to let Americans handle criminal cases involving their own citizens, even when those crimes might happen off-post and while the person is off-duty. He said he hoped U.S. officials would consider offering similar consideration.

Kang also said he understood the sentiments from the victim&#8217;s family in this case. But Kang and his fellow protesters say the issue of jurisdiction could set a precedent for future cases.