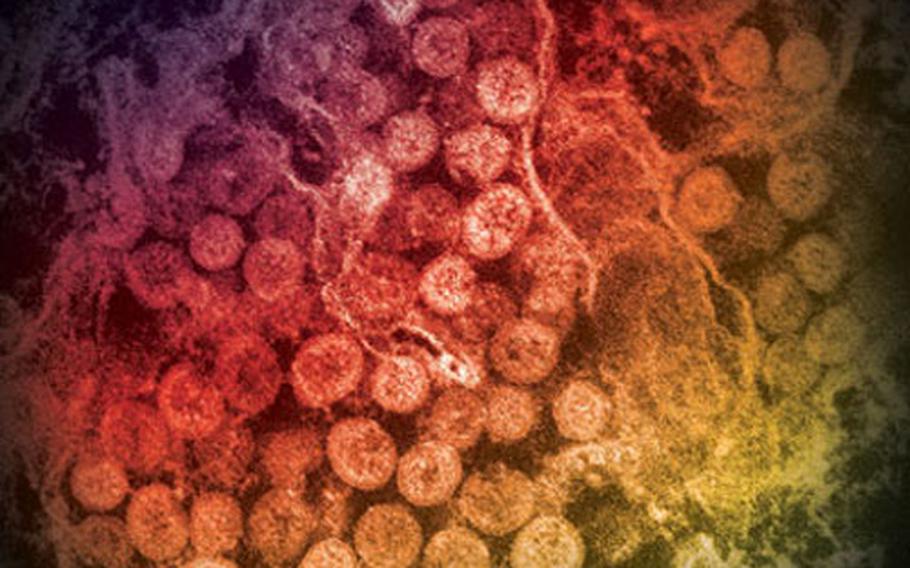 An electron micrograph shows a thin section of Middle East Respiratory Syndrome Coronavirus (MERS-CoV), showing the spherical particles within the cytoplasm of an infected cell. (Cynthia Goldsmith/Azaibi Tamin via CDC.gov)

SEOUL, South Korea — U.S. Forces Korea is encouraging the military community to observe personal hygiene to avoid transmission of a relatively new disease that has killed two people in South Korea, prompting some schools to close Wednesday and the president to convene an emergency meeting.

Some 30 people have been diagnosed with Middle East Respiratory Syndrome in the past two weeks. Symptoms include fever, severe cough and shortness of breath, with a death rate of 30 percent to 40 percent, according to the U.S. Centers for Disease Control and Prevention.

No cases of MERS have been reported among U.S. troops, family members or Department of Defense civilians, according to the 65th Medical Brigade.

In a statement Wednesday, USFK said its medical leaders are working closely with South Korean public health authorities and U.S. military leadership in the continental U.S. to monitor and contain the outbreak in South Korea.

Five MERS patients in South Korea were diagnosed Wednesday. South Korea’s Yonhap News reported that four are believed to have been infected through contact at a hospital with the country’s first patient, a man who caught the disease during an April trip to Bahrain. Another shared a hospital room with a previously diagnosed patient.

The rapid spread of the illness prompted President Park Geun-hye to hold an emergency meeting Wednesday to discuss quarantines and other efforts to halt the spread of the disease. Some 230 schools, about 1 percent of the nationwide total, were closed Wednesday because of the outbreak.

South Korean defense officials have set up a task force to help prevent the disease’s spread and are discouraging their troops from taking leave or having visitors at their installations. Some reservists are being allowed to delay mandatory training, Yonhap reported.

“Many people from different areas gather at boot camps and reservists’ training camps, so we’ve decided to prevent such chances from the outset,” defense ministry spokesman Kim Min-seok said, according to Yonhap.

The CDC said MERS was first detected in Jordan and Saudi Arabia in 2012. The disease spreads through close contact, such as care for, or living with, an infected person, and has been transmitted in hospitals. The disease is not believed to spread in community settings.

USFK said Wednesday that “all MERS patients identified have acquired their illness in hospital settings where they came in direct or indirect contact with MERS patients before they were diagnosed and isolated.”

South Korea’s Ministry of Health and Welfare said symptoms typically develop within two to 14 days of exposure to the disease, and there is no risk of infection before a patient displays symptoms.

No anti-virus treatments or vaccines for the disease are available, the ministry said.