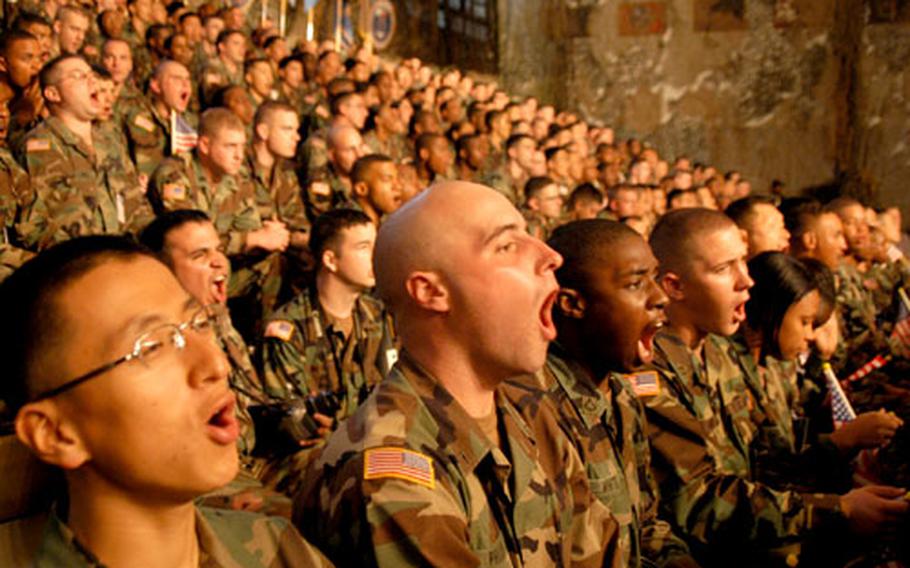 Soldiers with U.S. Forces Korea give a “hooah,” the Army’s traditional cheer, as they await the arrival of Defense Secretary Donald Rumsfeld. The soldiers had to wait about two hours for the secretary to arrive, and they sang songs, gave cheers and even did the wave during their wait. (Teri Weaver / S&S)

Soldiers with U.S. Forces Korea give a “hooah,” the Army’s traditional cheer, as they await the arrival of Defense Secretary Donald Rumsfeld. The soldiers had to wait about two hours for the secretary to arrive, and they sang songs, gave cheers and even did the wave during their wait. (Teri Weaver / S&S) U.S. Secretary of Defense Donald Rumsfeld greets servicemembers at Yongsan Garrison. The secretary took 10 questions from the audience that ranged from the U.S. future in Iraq to the military’s policies involving divorces to an invitation to the local Navy ball. (Teri Weaver / S&S) Secretary of Defense Donald Rumsfeld speaks to about 1,400 servicemembers from all branches on Friday afternoon at a town meeting at Yongsan Garrison, South Korea. (Teri Weaver / S&S)

YONGSAN GARRISON, South Korea &#8212; Secretary of Defense Donald Rumsfeld drew cheers at a town-hall meeting Friday afternoon for his praise of U.S. troops, his criticism of Iraq media coverage and his interest in an invitation to the annual Navy ball that night.

But it took a sergeant first class to bring down the house at Collier Field House. He asked the secretary why the military continues to allow servicemembers&#8217; retirement pay to be calculated into alimony payments.

He said his divorce would end up costing him more than $500,000 in retirement pay, or $5 an hour for his 14 years of marriage, should he live an average life span. It&#8217;s a result of the Uniformed Services Former Spouses Protection Act, a law that allows state divorce courts to define military retirement pay as commercial property that can be divided in a settlement.

Rumsfeld paused, praised the soldier for his math skills and listened while the whoops and hollers started among the 1,400 servicemembers plus family members invited to the question-and-answer period.

The secretary said he had asked for a study of the issue, but he also said that Congress was uninterested in addressing it now. He said he&#8217;s trying to find a way to make some changes tenable to members of congress.

Not all the questions were zingers during the hourlong session, and Rumsfeld seemed to enjoy the give and take.

He addressed the threat of losing control of Iraq to internal clashes, saying that Iraq eventually will have to use its own military and governmental leaders to quash threats.

One specialist asked why more soldiers weren&#8217;t allowed to learn Arabic, rather than Korean.

When asked how to stem misinformation from being disseminated through the media, especially in Iraq, Rumsfeld said it was a &#8220;test of wills&#8221; to see what stories would ultimately come out of that region of the world.

He mentioned one famous face has been missing from the media for a while.

One Navy officer asked Rumsfeld if he&#8217;d consider stopping by the annual Navy ball later that night. The ball was to start at 6 p.m., and the officer posed the question a few minutes before 5 p.m. Rumsfeld joked that the man was trying to get him to give shorter answers.

In the end, Rumsfeld was in no hurry to leave. He walked the room afterward, shaking hands and posing for snapshots with servicemembers. The 8th U.S. Army Band had finished playing and was packing up while Rumsfeld lingered at the exit talking.