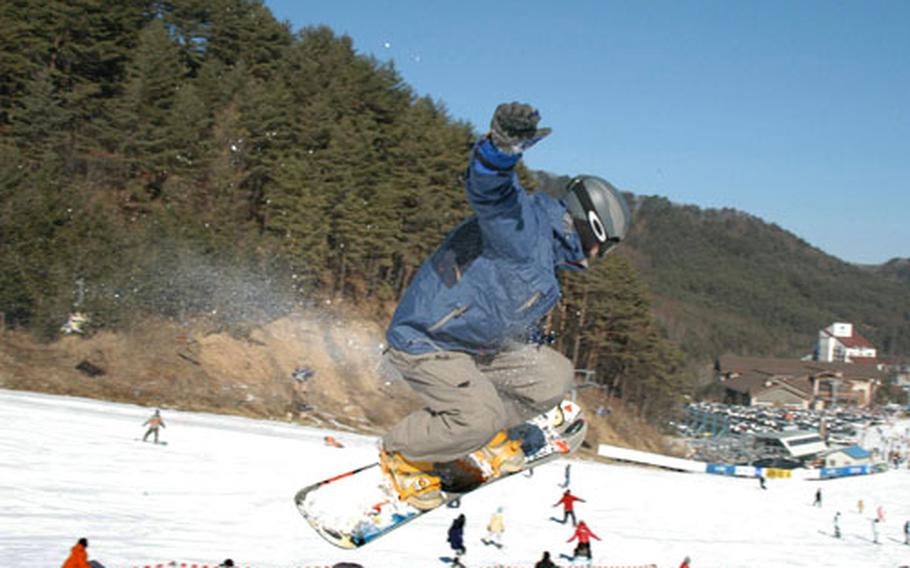 A snowboarder at the terrain park at Yongpyong resort. (Seth Robson / S&S)

YONGPYONG, South Korea &#8212; There are thrills and spills for skiers and snowboarders of all abilities at Yongpyong Resort, which routinely hosts organized holiday trips for soldiers and airmen.

A military group with servicemembers from Osan Air Base and Camp Essayons hit the slopes here recently alongside South Korean skiers and snowboarders.

The more adventurous took a 2-mile-long gondola ride to Dragon Peak for a survey of the terrain or a test of their skills on Rainbow Bowl&#8217;s steep slopes.

Lt. Col. Jim Stockmoe, commander of Essayons 102nd Military Intelligence Battalion, took a tumble coming off the chairlift. Regardless, he described the view of the mountains and coast from the top of the gondola as &#8220;spectacular.&#8221;

The two-day trips, sponsored by the United Service Organizations and base recreation departments, cost up to $150 per soldier and included transportation, accommodations, lift passes and gear.

Soldiers find them an easy way to hit the slopes.

&#8220;It was like a college trip,&#8221; Stockmoe said, referring to accommodations consisting of several three-bedroom condominiums, each housing about 15 soldiers.

The trip was a good way to help soldiers blow off steam in a healthy environment, he said.

&#8220;It is about getting the soldiers off of Camp Essayons and letting them experience Korea without the usual going downtown and drinking soju,&#8221; he said.

At Yongpyong&#8217;s terrain park, Senior Airmen Ernest Scarborough and D.J. Santana showcased their snowboarding skills on the rails and jumps.

Scarborough warmed up by negotiating a long horizontal rail with a jump at the end before heading for the tabletop, where he pulled off several 180-degree jumps.

Moore called conditions good for being so early in the season.

&#8220;Most of the slopes are crowded but everybody keeps out of each other&#8217;s space except the occasional stray bomber who gets in your way,&#8221; he said.