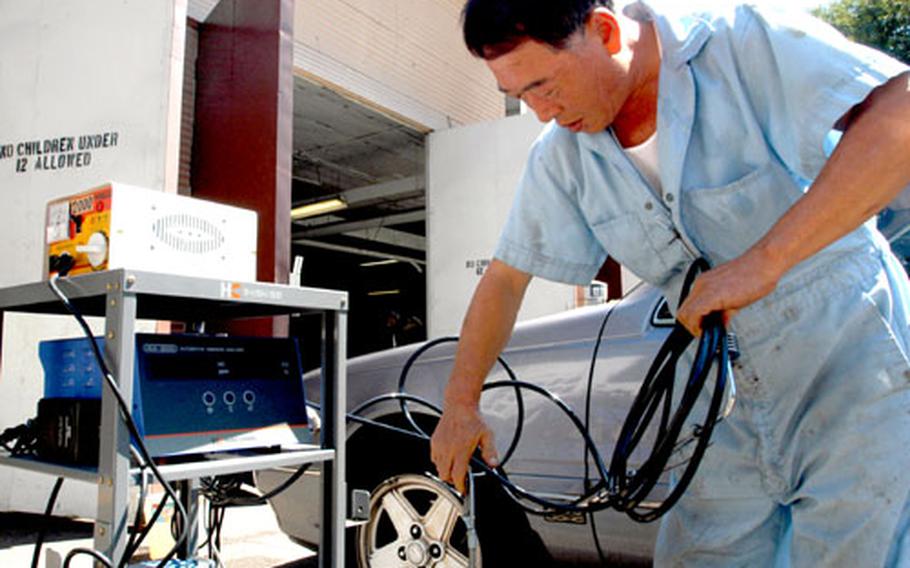 YONGSAN GARRISON, South Korea &#8212; Starting Oct. 1, all U.S. Forces Korea privately-owned vehicles must pass an emissions test to get on base, officials said this week &#8212; more than doubling the cost of annual safety inspections.

But the test increases the cost for an annual safety inspection from $9 to $19.95, according to Army and Air Force Exchange Service officials. A safety inspection must be performed yearly or when a vehicle changes owners.

Steve Oertwig, Korea Regional Office spokesman, couldn&#8217;t speculate on how many of the 14,282 privately-owned vehicles will fail the test. But more than 8,000 of those vehicles are more than 10 years old, he said.

Vehicles must pass tests for hydrocarbons, smoke and carbon monoxide, said John Anderson, USFK assistant chief of staff engineer. In the test, a probe is inserted into the vehicle&#8217;s exhaust pipe, and a printout indicates whether the vehicle passes, said Bill Donnelly, environmental branch chief for Installation Management Agency-Korea region. The test takes about five minutes.

The owner of a failed vehicle has 15 days to correct the problem, Oertwig said. Tactical vehicles are exempt, but government vehicles must be tested.

An interim change has been made to the standards that says vehicles should be tested; a permanent regulation is in the works, Wilson said.

In South Korea, emissions standards are based on a vehicle&#8217;s age, type and whether its engine uses gas or diesel fuel, Anderson said. USFK has merged the DOD and South Korean standards, he said.

&#8220;Some cars may have a more difficult time meeting the standard but &#8230; older cars have to meet a less-strict standard than the newer cars,&#8221; Anderson said. &#8220;The standards were built with realization that newer cars had better emission design.

The emissions test is performed at the same place as vehicle inspections, including AAFES car centers and Morale, Welfare and Recreation auto skill centers. At installations without such facilities, the test can be performed at transportation motor pools, Donnelly said.

All area motor pools have the testing equipment or have it on order, Donnelly said.

Drivers can get free unofficial &#8220;courtesy&#8221; tests to learn how their vehicles might perform on the official tests at Camp Walker transportation motor pools starting the first week of September, and at Yongsan Garrison MWR auto skills centers now. Courtesy tests will be offered at Camp Humphreys and Camp Henry when testing equipment arrives, Oertwig said.