USFK: Terrorists could target troops off base 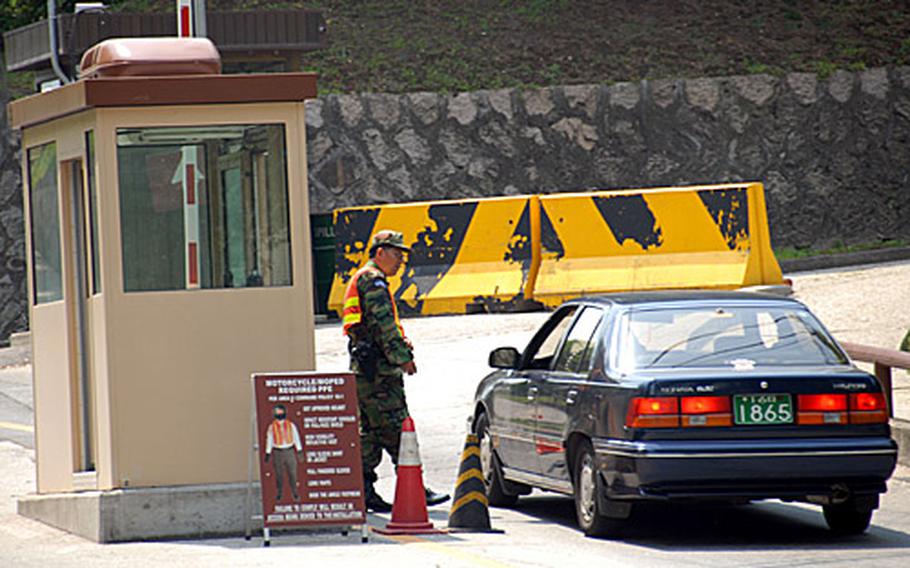 A guard checks the identification of a driver entering Yongsan Garrison in Seoul. (Ashley Rowland / S&S)

U.S. Forces Korea officials are more worried that terrorists could attack soldiers at popular off-base bars and restaurants than on base, U.S. Forces Korea&#8217;s head of Force Protection said Friday.

He said currently there are no credible threats against USFK bases, but officials have increased surveillance since the recent arrests of six people who planned to shoot soldiers at New Jersey&#8217;s Fort Dix.

Because force protection is a &#8220;very big issue&#8221; with USFK commander Gen. B.B. Bell, officials had begun airing television ads before the May 7 arrests encouraging soldiers to watch for possible terrorists, Allen said. Those ads, filmed in the 1980s and 1990s, were aimed at soldiers serving in the United States and Europe, but officials hope to air new messages targeted at soldiers in South Korea.

USFK officials investigated 27 suspicious incidents this year as of May 10, and 81 incidents in 2006, according to the Antiterrorism/Force Protection Division.

While off base, Allen said, soldiers should look for people who don&#8217;t seem to belong: someone who takes pictures longer than the average tourist; who carries a backpack inside a building then sets it down and leaves; or who asks a lot of questions, like an attractive woman who claims to be a college recruiter.

USFK recently had a woman pose as a college recruiter and she had no difficulty getting soldiers to talk, Allen said.

If someone seems to be asking too many questions, ask your own: Who do you work for? Why are you here?