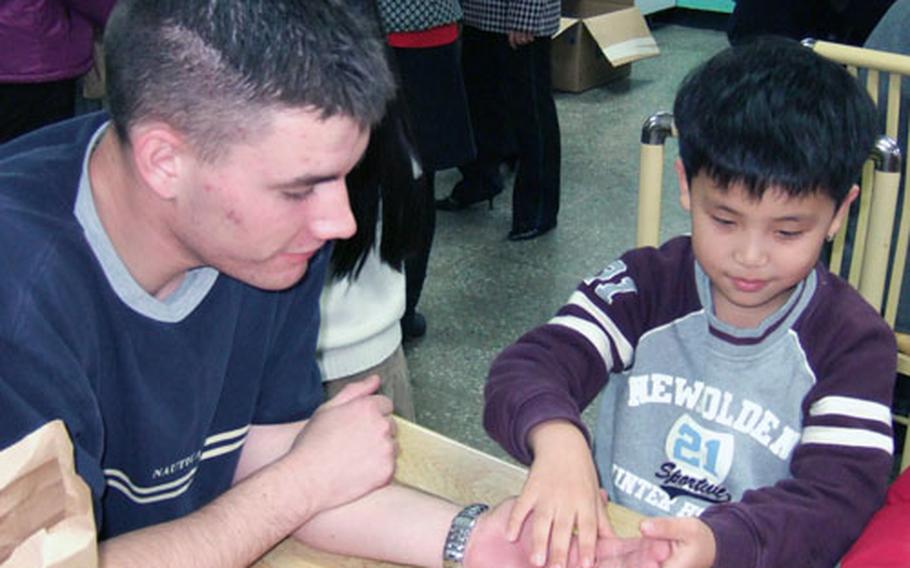 Army Pvt. Tyler Snapp plays with Kim Jung-wan, 7, during a visit to the Hanvit school for the blind during a Dec. 14 holiday party. (Hwang Hae-rym / S&S)

SEOUL &#8212; More than two dozen 1st Signal Brigade soldiers visited an off-base school for the blind late last week to deliver holiday gifts to the school&#8217;s 106 students &#8212; part of an ongoing relationship between the unit and the school.

The headquarters and headquarters company soldiers work with the Hanvit &#8212; or Grand Light &#8212; school as part of their Good Neighbor Program.

The relationship between the school and the U.S. military goes back decades, said U.S. military chaplain Lt. Col. Ken Kerr. The school was founded in the early 1960s to shelter a handful of abandoned South Korean blind women. When troops learned of their cause, they brought heavy machinery to the site to help carve a space in the rugged area for the home. Gradually, the home grew and started taking abandoned or orphaned blind children. Today, about 40 orphans live there. The other students commute for schooling.

The students &#8212; ranging from 4-year-olds to a few students in their early 20s &#8212; had filled out holiday wish lists this year and the soldiers didn&#8217;t disappoint, thanks to donations from soldiers, civilian workers and the Army and Air Force Exchange Service.

The students put on a concert to thank the soldiers. After the show, everyone moved to the dining hall where the students were given the presents.

Jung Ye-reum, 12, standing with her arms wrapped around her new teddy bear, said she was glad she practiced as hard as she did to perform for her visitors.

John Eargle, a 30-year-old specialist from South Carolina, found himself the center of attention as students peppered him with questions: &#8220;Do you like wrestling? Do you like singing songs? Is there a Korean song you know? Do you have a girlfriend?&#8221;

Eargle said talking with the kids was the best part of the day.