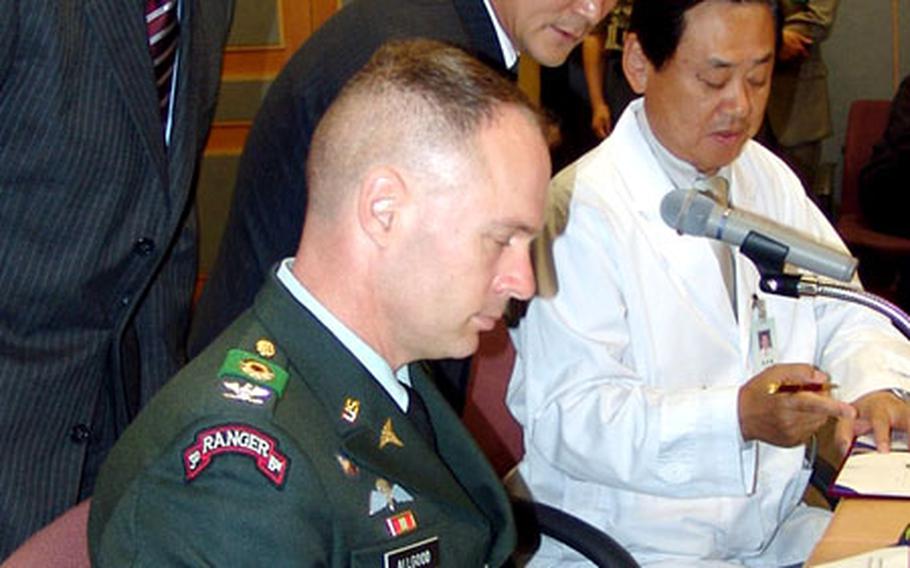 YONGSAN GARRISON, Seoul &#8212; Navigating a foreign health-care system can be daunting, especially for a person or family suffering through an illness.

But the 18th Medical Command, which provides health care to the soldiers, workers and retirees associated with U.S. Forces Korea, has agreements with 19 hospitals on the peninsula to help assure that medical care will be accessible and comfortable for American families, according to Col. Young Kim, deputy commander for clinical services for the command.

The agreements &#8212; called memorandums of understanding &#8212; assure that the hospitals have English-speaking doctors, use FDA-approved drugs and procedures and will provide Western-style services, such as meals.

The U.S. military provides medical care at its bases throughout South Korea and has one military hospital, the 121st General Hospital at Yongsan Garrison. Those medical facilities cannot always provide specialized care, such as in obstetrics, urology, immunology, cardiology and other areas of medicine, said Maj. Richard Lindsay, chief of the clinical support division.

Before 1999, the military sent its patients to a military facility in another country or to the States, a practice that added up to millions of dollars, command officials said.

The command has been working for six years to formalize agreements with South Korean hospitals so U.S. personnel can receive the health care they need without flying to another country.

Having access to hospitals in Seoul, Uijongbu, Taegu, Pusan, Kwangju, Chunan and other cities &#8220;is a major benefit,&#8221; Lindsay said.

The agreements also help patients get quicker medical care without worrying about navigating a foreign health-care system alone, according to Richard Kim, a manager at Tricare, the military&#8217;s worldwide health-care system.

Korean people can wait months for an appointment to see a specialist, like an urologist, according to Richard Kim. With these agreements, most military members and their families can get an appointment within a week, he said.

Patients also will find that South Korean medical services are much cheaper than most American counterparts, Richard Kim said. An MRI, for example, costs $500 to $600 in South Korea but can run well over $1,000 in the States, he said. The command also will help with transportation to and from the hospitals.

Even though the agreements are in place, USFK personnel, retirees and contractors should continue to work through the U.S. military medical staff first, Col. Kim said.

The agreements have no expiration date but Col. Kim and her staff visit each hospital at least once yearly. If there is a serious problem with quality of care, the agreement can be ended, said Charles Choi, whose job with 18th Medical Command includes overseeing all of the agreements.

These agreements are unique to South Korea, Choi and others said, but other military commands are looking into developing similar relationships.

Where you can go

Hospitals in Korea that have agreements with the 18th Medical Command to provide health care to U.S. Forces Korea:

Here are some tips from 18th MEDCOM about using the Korean health-care system:

When you visit an MOU hospital, you may want to:

Bring medical records and test records.Wear civilian clothes.Bring a snack and something to read.When you stay overnight at an MOU hospital, you may want to: