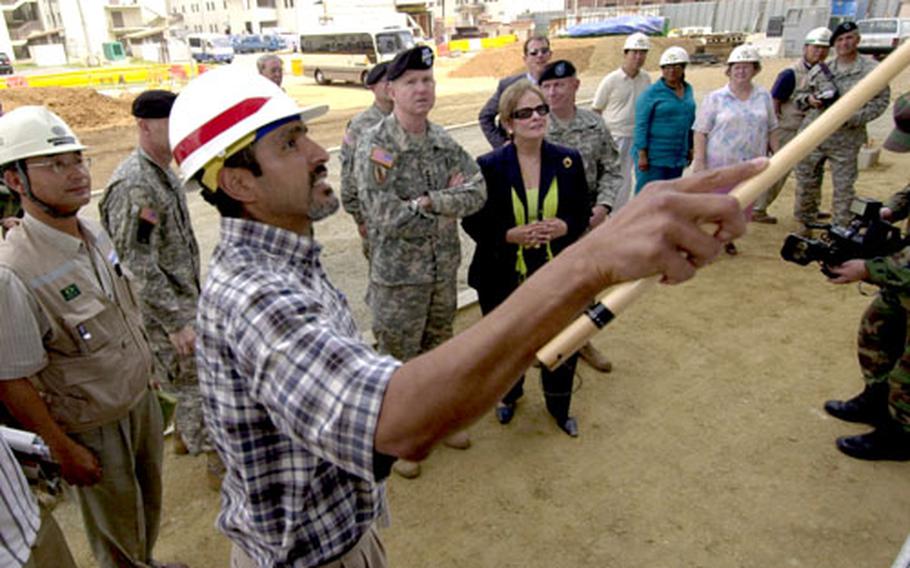 Edward Pena, of the U.S. Army Corps of Engineers, explains some of the features of a new housing tower to U.S. Forces Korea commander Gen. B.B. Bell and his wife Katie during a trip to Camp Humphreys on Monday. (T.D. Flack / S&S)

Area III commander Col. Michael Taliento escorted the group and briefed them on the transformation from a sleepy helicopter base with aging infrastructure to what will become the major U.S. installation on the peninsula. The base is to expand by about 2,300 acres and is to host the majority of the U.S. troops on the peninsula in upcoming years.

It was a fact-finding mission for the four-star general and he told those he talked with to be candid.

Bell asked Jacqueline Cruz, the CDC director, whether she&#8217;s able to adequately serve the community in the recently opened center.

She told the general that staffing, not space, is the only problem. Cruz recently lost one employee who was leaving South Korea and another is headed out. Those shortages, she said, will affect her ability to provide hourly care.

&#8220;I&#8217;ve run into this problem at a thousand CDCs,&#8221; Bell said, while suggesting officials investigate how they can move aggressively toward an hourly care program.

Youth center director Joon Auci told the visitors the center has about 25 children who use the services.

Taliento stressed that when a new housing tower opens later this year, bringing 48 more families onto the base, he thinks they&#8217;ll &#8220;really take advantage,&#8221; of the facilities.

Bell also ordered 8th Army communications leaders to visit the youth center so they could see firsthand how a filter used there prevents the children from accessing some legitimate educational Web sites.

Bell said the right software must be used to protect children who use the computers but that &#8220;mass blocks&#8221; aren&#8217;t working.

And while visiting the processing center, Bell said he wanted personnel there to devise an innovative way of tracking money issues &#8212; like re-enlistment bonuses &#8212; for the troops.