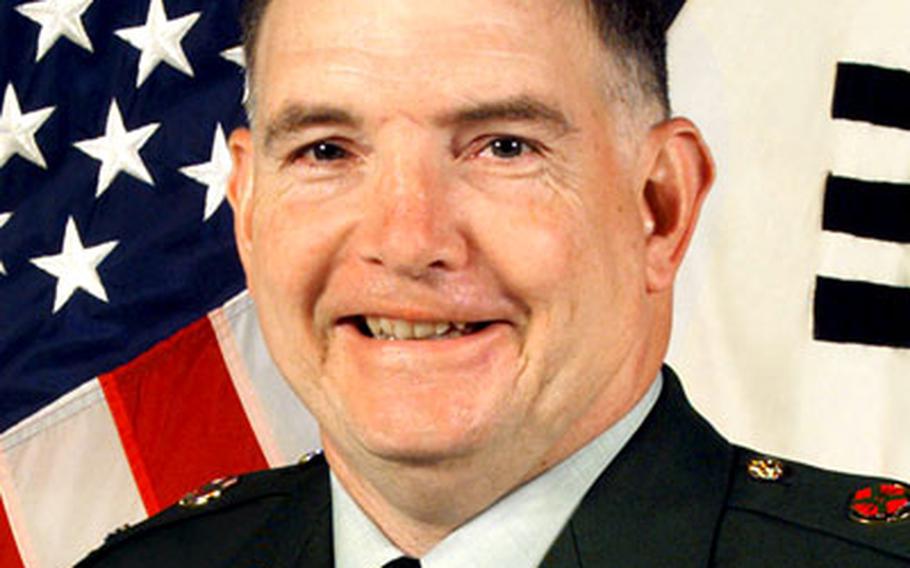 Col. Timothy McNulty has completed his two-year tour as Area II commander at Yongsan Garrison, South Korea. McNulty’s next assignment will be chief of staff of the Strategic Deployment and Distribution Command in Alexandria, Va. (U.S. Army photo)

YONGSAN GARRISON, South Korea &#8212; Making Area II the &#8220;assignment of choice&#8221; in South Korea, said the area&#8217;s outgoing commander, was the most important accomplishment of his two-year tour.

McNulty, who turns over command to Col. Ronald C. Stephens on Thursday, said the program works because he empowered his staff to make changes.

One of his challenges, he said, was keeping his people safe when they spent time off the garrison.

&#8220;We&#8217;ve made some big inroads with &#8230; the Korean business community in terms of the Itaewon Bar Association and their support for our force protection issues,&#8221; he said.

Owners agreed to check bags carried into their establishments and check IDs to keep teenagers out of the bars.

He also pushed for and worked with local authorities to clean up Itaewon&#8217;s infamous &#8220;Hooker Hill&#8221; prostitution den. Itaewon also is a popular shopping and nightlife district next to Yongsan Garrison.

Another challenge was funding, McNulty said. Early this year, garbage began piling up near restaurants, offices and residences when the military&#8217;s landfill was full and there was no money to have it emptied. By early March he&#8217;d freed enough money to start regular garbage pickup.

When the command receives funding for the rest of the year, programs will be fully in place so the money can be used in areas that might have lacked needed resources in the beginning of the year, he said.

The biggest problem, McNulty said, is lack of E-5 and E-6 on-base housing. Programs are in place to bring some existing quarters up to standard so arriving soldiers need not live off post, he said. &#8220;I&#8217;m willing to spend money to give them the quality of life they deserve.&#8221;

McNulty also said being here with his family helped him keep in touch with the community.

&#8220;Not only was I more in tune with the needs of the sports programs or the schools because of my children&#8217;s involvement &#8230; I was also more visible to the community and &#8230; folks knew if they had an issue or something to talk about, they could always track me down at one of those places.&#8221;

McNulty&#8217;s next assignment will be chief of staff of the Strategic Deployment and Distribution Command in Alexandria, Va.