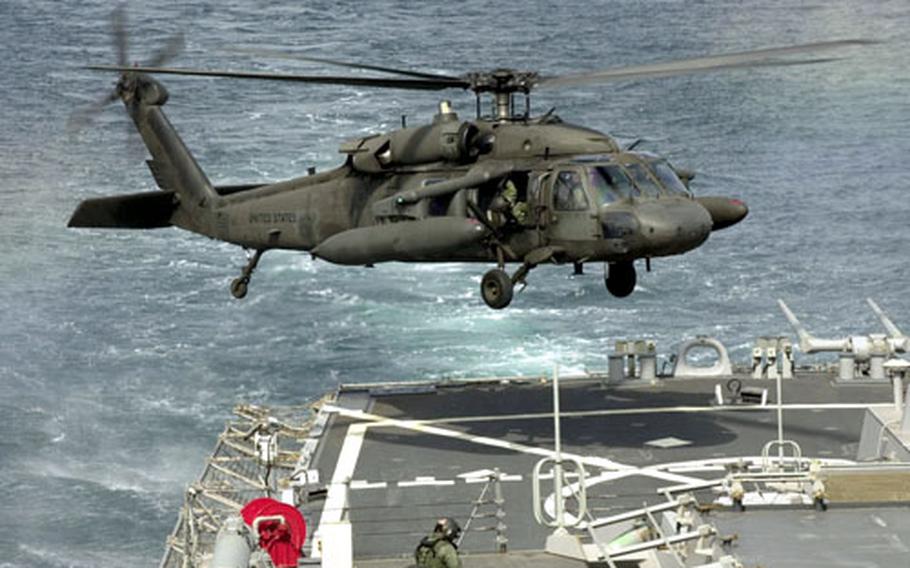 An Army UH-60 Black Hawk comes in for a landing on the back deck of the USS Curtis Wilbur during training in March off west coast of South Korea. Korean hikers recently discovered the remains of a similar helicopter that crashed northeast of Seoul in 1998. (T.D. Flack / S&S)

SEOUL &#8212; A group of South Korean hikers recently discovered the remains of a U.S. helicopter that crashed northeast of Seoul more than eight years ago, according to the U.S. military.

&#8220;Accident investigation reports from 1998 confirm that victim remains, pertinent flight instrumentation and some wreckage were recovered at that time,&#8221; a USFK spokesman stated in an e-mail response late Friday night.

&#8220;Those same reports also state that the aircraft wreckage was strewn over an 80-percent grade mountain cliff and could not be completely recovered due to the extreme terrain.&#8221;

The USFK response did not address whether South Korean environmental groups&#8217; complaints last week, of possible environmental-impact concerns, were valid.

The response also failed to address whether the South Korean government had a role in allowing the wreckage to stay on the mountain.

&#8220;The case, while closed, will be reviewed for any new information gleaned from this discovery, when USFK and (South Korean) officials revisit the crash site,&#8221; according to the e-mail response.

Kang Seung-bong, a 48-year-old South Korean man, and five other mountaineers discovered the helicopter wreckage while climbing on the mountain, according to South Korean news reports.

The two pilots and crew chief were on a routine training mission to Camp Page when they crashed into a mountain near the town of Kapyong, about 20 miles northeast of the capital city.

At the time, military police sealed off the site with help from the Korean National Police, according to the Stripes reports.