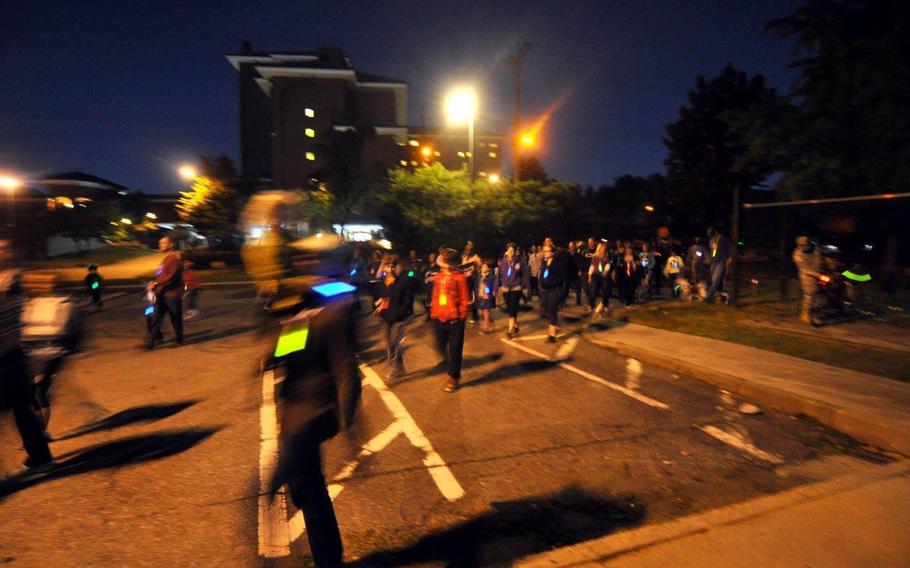 People attend an evening event at Yongsan Garrison in South Korea in this undated photo from the U.S. Army. U.S. Forces Korea paid South Korea's main electricity company nearly $2 million this week after a report that it was overdue on its bills for the year. (Young Ho Jung/U.S. Army)

SEOUL, South Korea — U.S. Forces Korea paid South Korea’s main electricity company nearly $2 million this week after a report that it was overdue on its bills for the year.

USFK had failed to pay 1.9 billion won worth of electricity bills from January to July, South Korea’s Yonhap news agency reported over the weekend. It cited data submitted by the Korea Electric Power Corp., known as KEPCO, to the National Assembly’s Trade, Industry and Energy Committee.

A KEPCO official told Stars and Stripes the utility received 1.6 billion won from USFK on Monday and 2.8 million won on Thursday. That amounts to about $1.7 million.

The military still owes some money, the official said without providing a specific amount. The KEPCO official spoke on condition of anonymity.

The military has submitted all invoices for payment according to the procedures and rates agreed upon by the U.S. and South Korean governments, said USFK spokeswoman Michelle Thomas.

“We will continue to work to ensure that invoices are processed and paid in a timely manner upon receipt from KEPCO,” she said in an emailed statement. “The U.S.-Republic of Korea Status of Forces Agreement provides a time-tested, reliable, effective and bilaterally agreed process for adjusting utility rates.”

The report that USFK was behind in its payments had prompted Lee Chan-yeol, a member of the opposition Minjoo Party who serves on the energy committee, to call on the government to update the longstanding contract with USFK.

Electricity bills are a sensitive subject in South Korea, which uses a progressive billing system that critics say unfairly slaps users with excessively high rates. The issue came to the fore during a heat wave over the summer.