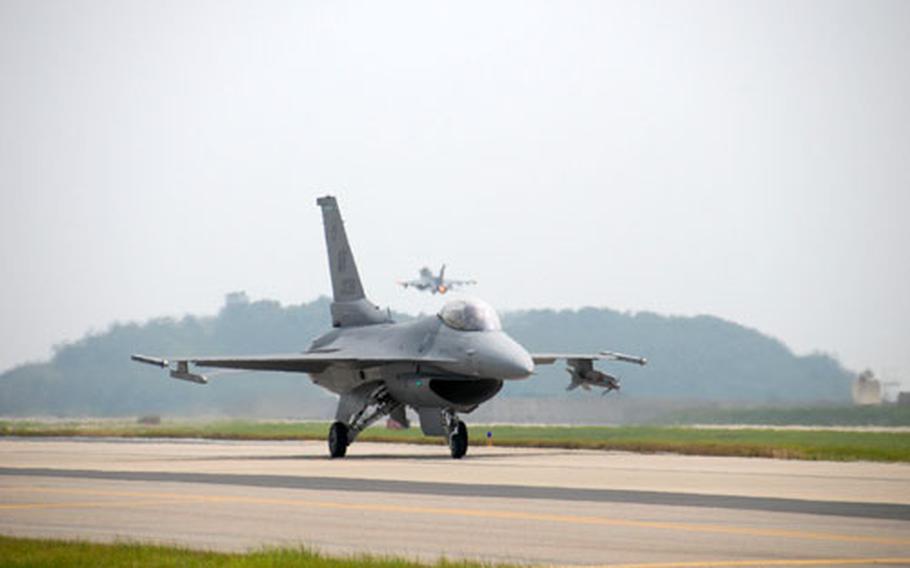 U.S. military officials said Tuesday that there had been no “official” talks of withdrawing one of the 7th Air Force’s three F-16 squadrons, but wouldn’t say whether the issue was broached informally in talks between the countries. (Ashley Rowland / S&S)

OSAN AIR BASE, South Korea &#8212; U.S. military officials said Tuesday that there has been no &#8220;formal&#8221; talk of withdrawing an F-16 fighter squadron from South Korea but declined to discuss whether the matter has been mentioned informally between the two countries.

The Chosun Ilbo &#8212; a South Korean newspaper &#8212; reported on its Web site Tuesday that the United States told the South Korean government it would withdraw a squadron of &#8220;some 20&#8221; F-16 fighters by year&#8217;s end. The Web report quoted unnamed military sources saying Monday that the notification had been made informally during recent military talks between the two countries.

The United States gradually is reducing its forces on the peninsula from 37,000 in 2004 to 25,000 by the end of this year under an agreement with South Korea. U.S. Forces Korea now has slots for about 28,500 U.S. troops in South Korea and about 27,000 currently are stationed here.

In testimony before a U.S. congressional committee March 12, USFK commander Gen. B.B. Bell spoke of the possibility that South Korean president Lee Myung-bak might ask President Bush for a pause in the drawdown timetable. The two leaders are to meet in Washington later this week.

Childress said any &#8220;changes to our agreements would be the subject of formal, government-to-government consultations and would be announced jointly by both the United States and the Republic of Korea should such a change be agreed.&#8221;

The U.S. 7th Air Force (Air Forces Korea) maintains two fighter wings on the peninsula with a total of four flying squadrons, three of them equipped with the F-16 Fighting Falcon. Air Force F-16 squadrons typically comprise 24 of the fighters.

Bell has hailed the key role to be played by U.S. air and naval forces in defending South Korea.