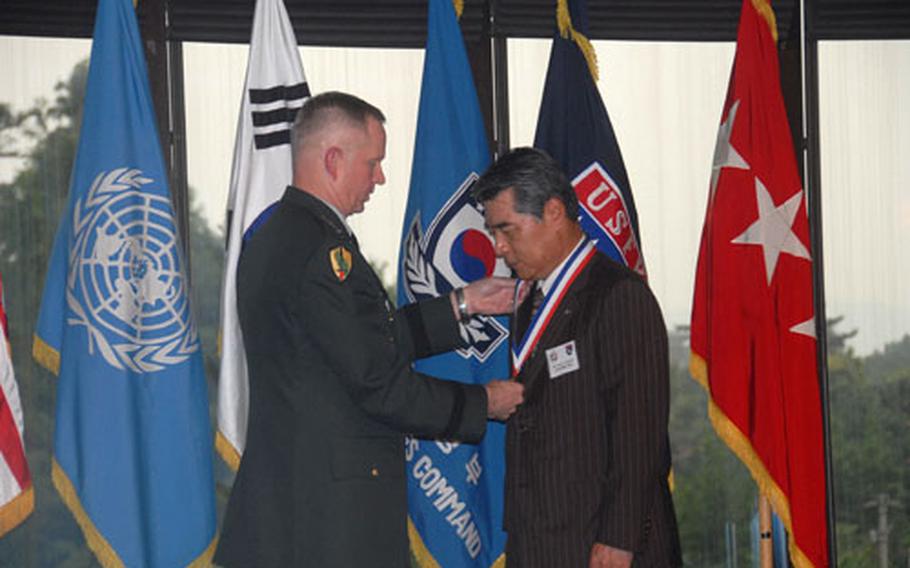 U.S. Forces Korea commander Gen. B.B. Bell, left, gives a medal to Park Byung-ho, one of eight recipients of USFK’s 2007 Good Neighbor Awards. The winners were honored at a ceremony and dinner at the Dragon Hill Lodge in Seoul. (Ashley Rowland / S&S)

&#8220;These gentlemen do that every day and they don&#8217;t get paid one penny for it. They do this out of the goodness of their hearts to bring these two nations closer together,&#8221; U.S. Forces Korea commander Gen. B.B. Bell said before a ceremony honoring them.

The Good Neighbor Awards recognize South Koreans who have contributed to a better quality of life for U.S. servicemembers and furthered ties between the two countries.

This year&#8217;s award winners hosted programs that introduced U.S. servicemembers to Korean culture, as well as sporting events and other activities.

The winners were given medals and plaques during a ceremony, followed by a dinner, at the Dragon Hill Lodge.

The winners and their achievements, according to the ceremony program: