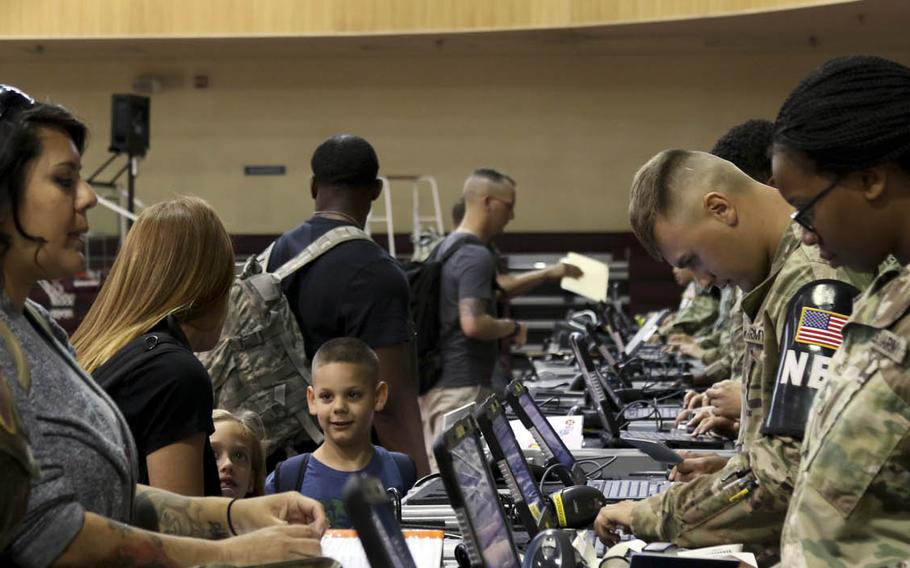 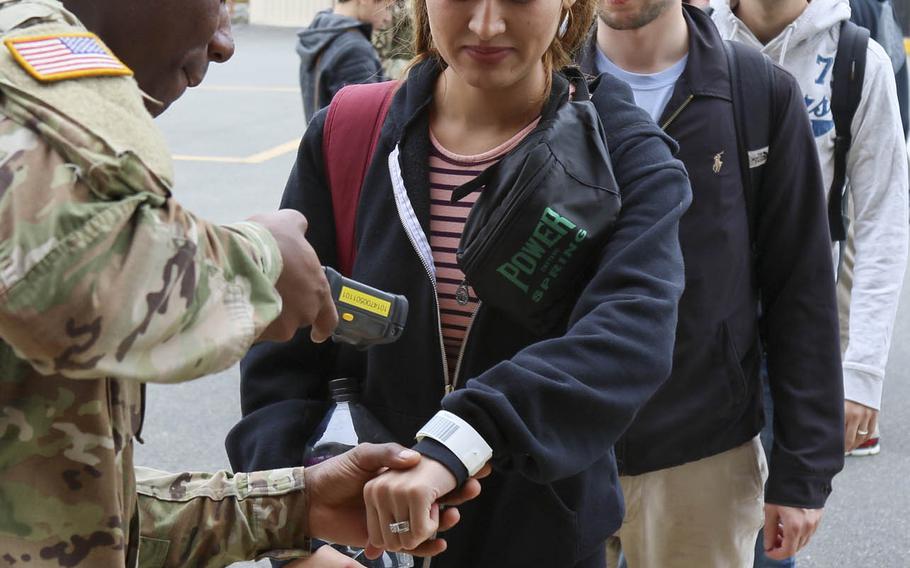 CAMP HUMPHREYS, South Korea — As North Korea conducted missile tests and the new U.S. administration threatened preemptive military action, many Americans living here wondered what to do if war ever broke out.

Soldiers’ families and other civilians affiliated with the Department of Defense got to practice last week. Against the backdrop of rising tensions with the North, the U.S. military conducted a semiannual evacuation drill known as Focused Passage.

“I liken the NEO operation to being a scaffolding. It’s not a fully fleshed out plan because it’s preparing for a million different worst-case scenarios,” 1st Lt. Katelyn Radack, a spokeswoman for the 2nd Combat Aviation Brigade, told Stars and Stripes.

“Obviously the one that is forefront in our mind is a resumption of hostilities with North Korea or rising political tension leading to the feeling that American citizens might not be safe” on the peninsula, she said. “Keeping our families safe is our No. 1 priority, and hopefully we would order an evacuation before it ever comes to actual rounds across the DMZ.”

The isolated, communist state has stepped up the pace of its nuclear weapons program, test-firing at least 14 missiles this year and conducting two underground nuclear explosions last year.

The crisis reached a nadir earlier this year after President Donald Trump warned that pre-emptive military action was on the table and deployed U.S. warships to the region.

U.S. Forces Korea insists the evacuation drills are unrelated to current events, and it limited media coverage. Stars and Stripes was given access to interview people, but only official photography was allowed “due to the sensitive nature of the exercise,” the public affairs office said.

Practice makes perfect Brandy Madrigal, 32, was participating in her third NEO — so she knew exactly what to pack when she got the call to report to the Assembly Point at the main gym at Camp Humphreys on June 5.

She ticked off the list — clothes, food for the kids, documents, phone, toiletries — before driving with her two children from their first-floor apartment to the base to be processed.

Her kids — 8-year-old Kaylee and 7-year-old Anthony — had their own priorities: filling their bunny and Superman backpacks with beloved blankets and toys.

The family’s two dogs stayed behind since this was, after all, only pretend.

Among the first to arrive at the gym, the three were searched in a tent set up outside, then were guided inside the gym to meet the warden representing her husband’s 4th Attack Reconnaissance Battalion, 2nd Aviation Regiment. Each unit had its own table set up.

The warden checked their documents, then led them to representatives stationed in the center of the gym to handle questions about power of attorney, financial issues and concerns about pets before finally registering them in a row of computers under the rock-climbing wall.

Madrigal was one of nearly 50 people selected for evacuation all the way to Japan. A Chinook helicopter took her and her kids to Daegu, where they spent the night before boarding a C-130 to Yokota Air Base.

She has participated in every NEO since arriving at Humphreys in 2015, but this was her first time going all the way to Japan. She has learned something new each time.

“It always changes. The layout is different from last time. I would recommend going through it every time,” she said in an interview. “I know that the population here would be way much more and it would probably be way more chaotic so keeping track of my children is my main concern throughout this whole process.”

The military takes many steps to ensure the safety of the families of its soldiers, and NEO is a fine-tuned process.

Families maintain binders with questionnaires and documents that have all the information needed to ensure a smooth transition. There’s a warden and deputy warden appointed for every 15 family units with quarterly checkups to make sure their information is current.

The evacuation drills — Courageous Channel in the fall and Focused Passage in the summer — ensure that at least twice a year there’s an accurate accounting for military dependents.

Participation is mandatory for all family members of servicemembers in South Korea. It’s encouraged for Defense Department contractors and their families, U.S. Embassy staff, Defense Department retirees and any other American civilians with base access, the 8th Army said.

Madrigal didn’t anticipate such a hard trip to Japan when she signed up. She didn’t know they would spend the night in a barracks in Daegu. In all, she estimates the whole thing included “about five bus rides, two air transportations and a whole lot of waiting in between.”

But there also was a sightseeing trip arranged in Japan, and she appreciates the learning experience.

“It was perfect because every bad thing that happened with us made them rethink and re-strategize the NEO exercise next time,” she said.

Rotating out Since only a few dozen families went as far as Japan, the military used the fact that the 1st Armored Brigade Combat Team, 1st Infantry Division is rotating out of the country to make up the difference.

Radack said 350 soldiers from the Fort Riley, Kansas-based 1-1 were being assigned roles ranging from people with special needs or medical issues to simply “really angry people.” They represent about 8,000 civilians from about 20 agencies and units who would likely come through the site.

“So that’s what we would deal with if we were doing a real-world evacuation, not to mention anybody in the surrounding area etc., etc.,” she added.

To make it a more realistic scenario, the Humphreys garrison also planned a civil defense exercise in which a bomber simultaneously tried to storm the post in an explosives-laden vehicle.

The United States has about 28,500 servicemembers stationed in South Korea as a deterrent force against the North after the 1950-53 Korean War ended in an armistice instead of a peace treaty. Most of them bring families with them.

While tensions have risen in the past, noncombatants have never faced a massive evacuation from the peninsula.

Everybody else The need for evacuation is a State Department call, facilitated by the military, USFK said.

No Americans will be turned away, but it’s unclear how exactly those who don’t have access to the many bases on the peninsula will be accommodated. Citing State Department figures, Radack said about 190,000 U.S. citizens live in South Korea and that number rises to around 220,000 during peak tourist season.

The U.S. Embassy doesn’t give details about possible evacuation plans but “encourages all U.S. citizens traveling to or residing in Korea to register” with the Smart Traveler Enrollment Program known as STEP, which can be done online. It notes the consular section’s website also has relevant information.

Ron Roman, an American veteran who remained in South Korea, has base access but is still concerned about the possibility of war. He said his NEO warden told him to meet at the high school on Osan Air Base, south of Seoul, in the event of a crisis.

But Roman believes the base will be an initial target of the North Koreans.

“I just don’t know how this thing’s going to work,” he said. “Uncle Sam is not getting out the word. There’s no outreach to reach the American citizens who … have nothing to do with DOD or State Department whatsoever.”

Radack said all American citizens, green card holders and permanent residents will be welcome – as long as they can get on base. Those without base access should be directed by the State Department to an assembly point or evacuation control center.

“Obviously we have a tighter control over people who are here under DOD affiliation,” she said. “In an absolute emergency situation we are not ever going to turn away American citizens.”