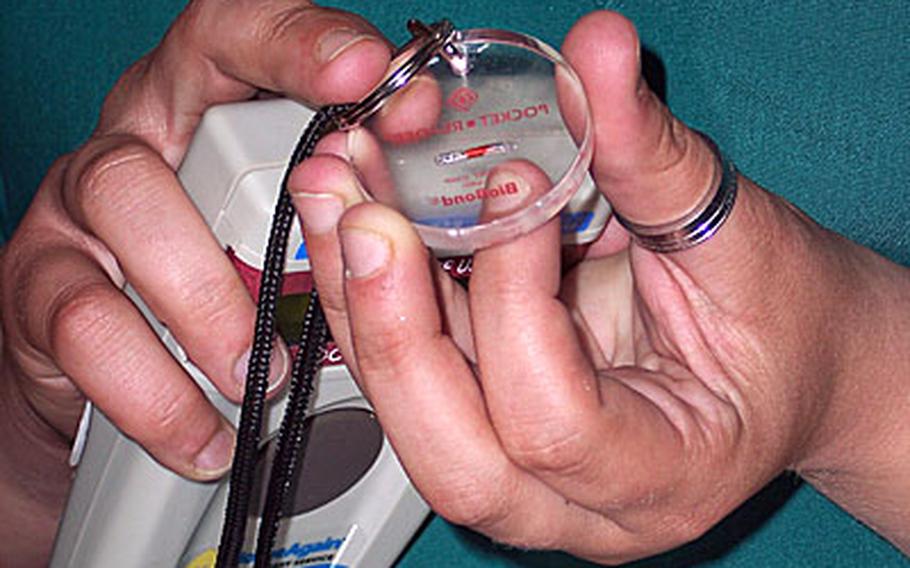 A small red microchip, shown here at the center of a clear, round disc, must be implanted in dogs, cats and some other domesticated pets belonging to status of forces agreement personnel in South Korea. A recent regulation on pet ownership also sets rules for pet registration and bans abandonment. (Erik Slavin / S&S)

CAMP RED CLOUD, South Korea &#8212; Most household pets now must be registered and implanted with microchips, according to a recent U.S. Forces Korea regulation that applies to all status of forces agreement personnel in South Korea.

The regulation also makes abandoning a pet within South Korea &#8212; or any other breach of the rules &#8212; punishable under the Uniform Code of Military Justice for servicemembers. Civilians will be subject to administrative action.

Microchips already were being implanted in pets after a command policy letter called for them in February. Most of the regulation&#8217;s other guidelines already were highly encouraged, said Maj. Ronald Powell, 129th Medical Detachment commander at Yongsan Garrison.

Small, caged animals such as gerbils and hamsters do not require microchip implants, according to the regulation.

The microchip is implanted under the skin and is required for non-emergency veterinary service on military installations in South Korea. Likewise, pets entering Japan must be microchipped, according to the Army&#8217;s Japan District Veterinary Command.

Implanting the chip usually is slightly painful, but reactions for pets vary based on their temperaments, said veterinary technician Spc. Allison Meshell of the 106th Medical Detachment at Camp Red Cloud.

The injection costs $15. The microchip should last the pet&#8217;s lifetime and can be checked by a universal reader used by military and civilian veterinarians worldwide, officials said.

Dogs, cats and ferrets must receive yearly rabies and distemper inoculations, the regulation states, and must display a rabies vaccination tag on pet collars or harnesses.

Should a noncombatant personnel evacuation of South Korea ever be necessary, cats and dogs are the only pets that will be evacuated, the regulation states.

The regulation also spells out procedures for punishing animal abuse and neglect, as well as law enforcement notification when animals bite and injure people.