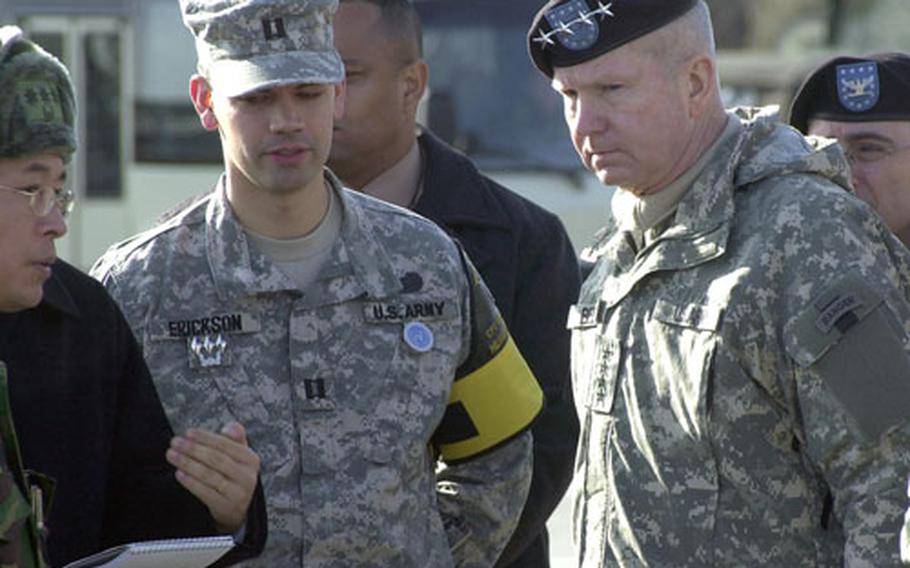 Capt. Graham Erickson, left, and U.S. Forces Korea commander Gen. B.B. Bell listen as a translator interprets for a South Korean military commander during a visit to the Eastern Transportation Corridor on Tuesday. Following the visit, Bell said Erickson illustrates the command’s push for more troops serving in South Korea with their families. Erickson, who served a year in Iraq, is now on an unaccompanied tour to South Korea, meaning another year away from his wife and 2½-year-old son. (T.D. Flack / S&S)

Capt. Graham Erickson, left, and U.S. Forces Korea commander Gen. B.B. Bell listen as a translator interprets for a South Korean military commander during a visit to the Eastern Transportation Corridor on Tuesday. Following the visit, Bell said Erickson illustrates the command’s push for more troops serving in South Korea with their families. Erickson, who served a year in Iraq, is now on an unaccompanied tour to South Korea, meaning another year away from his wife and 2½-year-old son. (T.D. Flack / S&S) 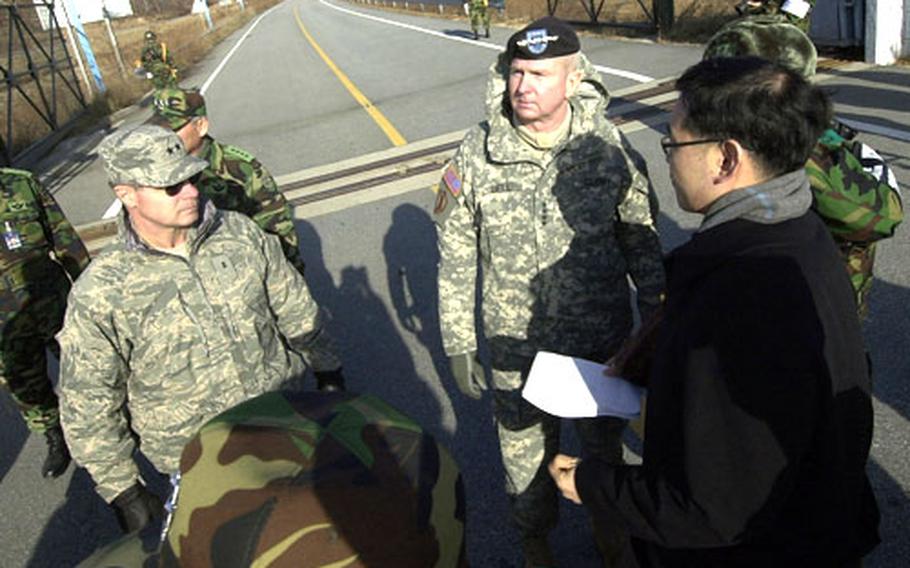 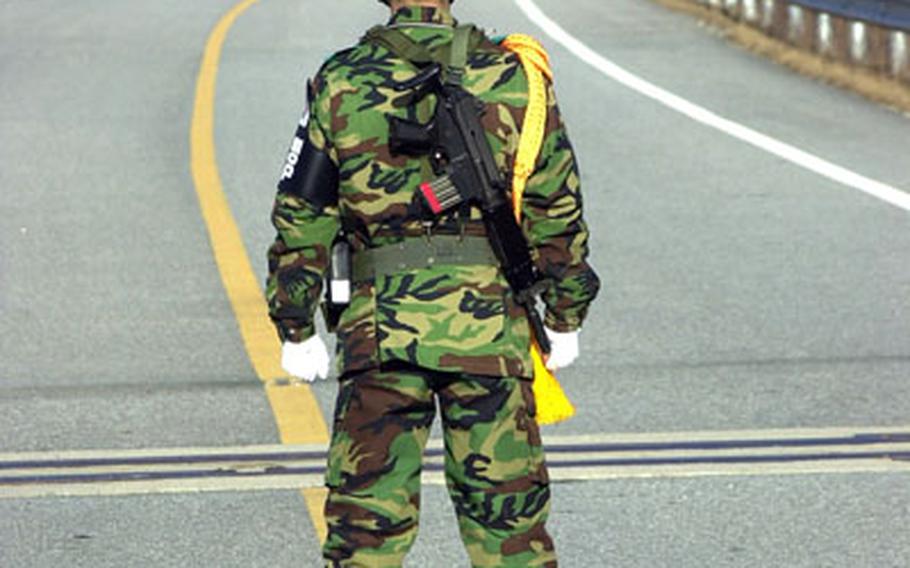 A South Korean guard stands on the Eastern Transportation Corridor that leads into North Korea on Tuesday. (T.D. Flack / S&S)

THE DEMILITARIZED ZONE &#8212; The senior U.S. military commander on the Korean peninsula has praised the work that goes into the &#8220;delicate and complicated&#8221; issue of moving civilians through the Demilitarized Zone during a visit to the Eastern Transportation Corridor.

Army Gen. B.B. Bell &#8212; commander of U.S. Forces Korea, the Combined Forces Command and the United Nations Command &#8212; made the comments Tuesday during his first trip to Observation Post 717, the last major outlook tower on the country&#8217;s east coast, just off the rocky, windswept shoreline.

Four U.N. Military Armistice Commission personnel &#8212; an Army captain, two Army noncommissioned officers and an Air Force NCO &#8212; man the post as a team that monitors all armistice compliance on the highway and railway that mark the corridor between North and South Korea.

Their post sits on a small mountaintop, peering down on the route through the DMZ &#8212; the world&#8217;s most heavily-defended border.

The railway and highway &#8212; agreed upon in 1989 by North and South Korea &#8212; allow people from the democratic South to visit and stay at the Mount Geumgang resort under a tourism program run by South Korea&#8217;s Hyundai Asan company.

Hyundai Asan has a 50-year land lease with North Korea, and the resort employs 90 South Koreans, 1,000 North Koreans and 500 Chinese. It&#8217;s the only place on the peninsula where Koreans separated by the DMZ can meet in reunions.

Since the land route opened in 2003, about 1.18 million people have made the journey, a spokesman from the Ministry of Unification said Wednesday.

And the UNC-MAC personnel at the corridor, who live in a nearby South Korean city and generally serve one-year tours, have coordinated and overseen the movement of every bus, truck and train as part of their duties.

Capt. Graham Erickson, UNC corridor control officer, briefed Bell on the mission during the visit. He explained that his staff &#8212; which until recently was assisted by a New Zealand military officer &#8212; is responsible for facilitating all operations. Among those tasks are monitoring armistice compliance and crossings, inspecting the corridor and working with the South Korean military.

Watching the contact between the divided Koreas, he said, also is rewarding and could help in the reconciliation of the countries.

Bell told the UNC-MAC personnel and the South Korean military and civilians that they have a &#8220;very good approach to this very delicate and complicated problem&#8221; of fluid civilian movement through the DMZ. He pledged his continued support until the &#8220;fences and the wires and the guns&#8221; are no longer needed.

In a brief interview before flying back to Seoul, Bell told Stars and Stripes that the work at the corridor shows &#8220;the desire of the people to go north&#8221; in hopes of reuniting with their families.

Unaccompanied tour touches nerveTHE DEMILITARIZED ZONE &#8212; A discussion U.S. Forces Korea commander Gen. B.B. Bell had this week with the captain in charge of a remote duty station on the DMZ touched a nerve.

Visiting the Eastern Transportation Corridor on Tuesday, Bell spoke with Capt. Graham Erickson, the United Nations Command corridor control officer, and learned the young officer has spent less than a year with his 2&#189;-year-old son since joining the Army.

&#8220;Erickson should be here with his wife and family,&#8221; said Bell, who has been pushing to &#8220;normalize&#8221; more assignments in South Korea to bring more families here and lengthen tours.

Only six months after returning from a one-year Iraq tour in December 2006, Erickson reported to South Korea and was assigned to work with the UNC&#8217;s Military Armistice Commission.

Most troops in South Korea serve for a year without their families.

In August, Bell signed a memo that converted 2,823 billets to the accompanied status beginning in October. That raised the accompanied slots from 2,930 to 5,653 out of about 29,000 billets in South Korea.

Bell said Tuesday the transition will be a 10-year process.

Erickson told Stripes he&#8217;s spent less than a year with Evan, his son. And the captain was quick to explain how his wife, Stephanie, feels about his South Korea tour.