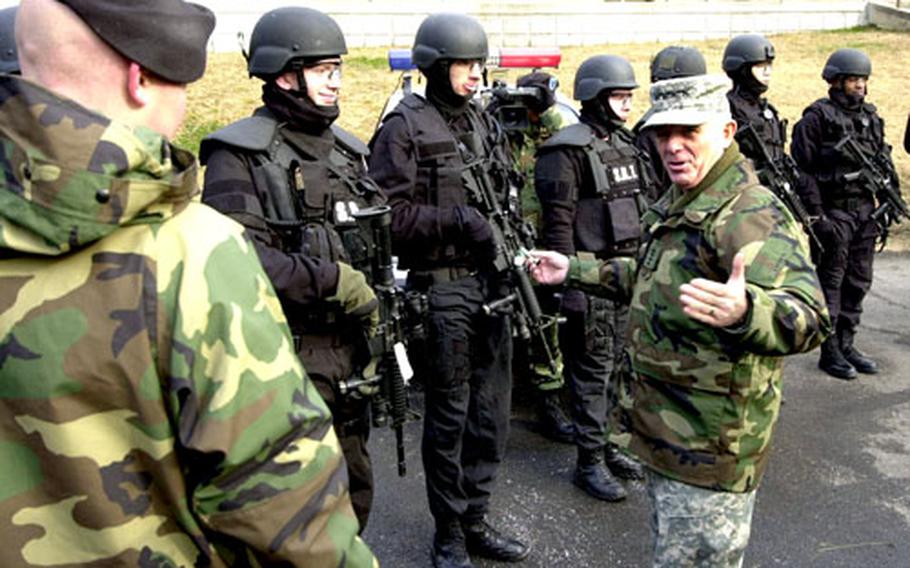 The military police showcased their skills for their commander, running a Special Reaction Team drill, putting the working dogs through their paces and demonstrating a mobile X-ray screening system.

LaPorte spent about 20 minutes with the SRT soldiers, inspecting their black uniforms, body armor and weaponry with Staff Sgt. Lindsay Crudup, noncommissioned-officer in charge of the team.

The general chatted with each soldier, asking whether they received enough training time and what they thought of their gear.

Sgt. Brett Smith told LaPorte about some of his gear and Spc. Bradley Klink pointed out he was wearing Army-issue gloves.

Crudup told the general that many of the SRT members like to buy their own high-speed equipment, things like boots and gloves.

LaPorte also browsed through a table of SRT gear while accompanied by 1st Lt. Jeremy Prince. The display included weapons, breaching gear and a range finder.

He chatted with a team sniper about the importance of that specialty throughout history, mentioning the Battle of Gettysburg.

LaPorte was escorted through the kennels up to the training area on the top of a steep hill, where Staff Sgt. Ken Jurish and his working dog waited in a fenced area.

Jasper and Jurish ran through a role-playing drill in which Jasper played the &#8220;bad guy&#8221; whom the dog loved to apprehend.

Crudup said the visit was a treat for his soldiers, who all received a commander&#8217;s coin from LaPorte.