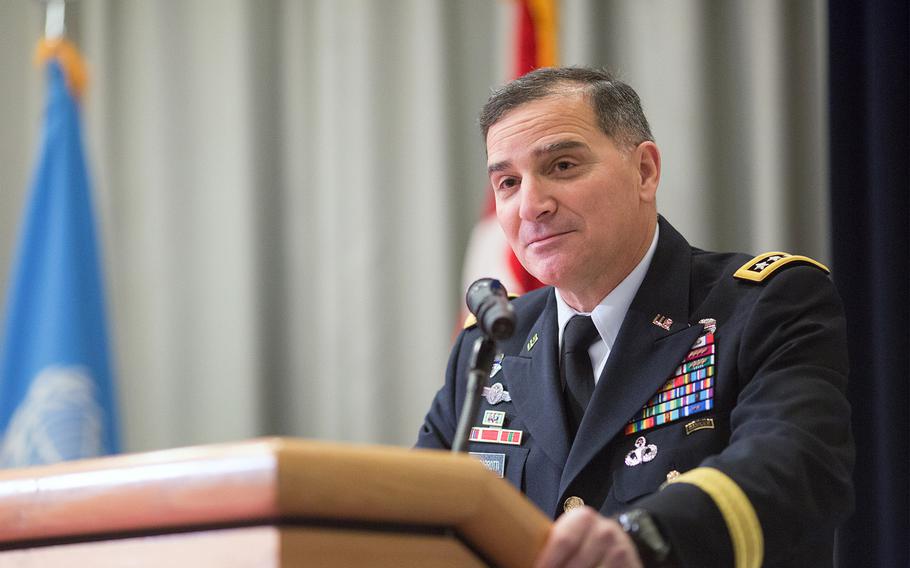 WASHINGTON — The commander of U.S. forces in Korea said Friday that he thinks North Korea is capable of producing a miniaturized nuclear device, a necessary step toward nuclear missile capability.

Acquiring such a capability is a complex undertaking, requiring a nation to design and build a nuclear warhead compact enough to fit on top of a missile, and develop sophisticated rocket systems to deliver the warhead accurately. But U.S. officials have grown increasingly concerned in recent years that North Korea — a sworn enemy of the United States and South Korea — was successfully moving down that path.

“Personally I think that they certainly have had the expertise in the past, they’ve had the right [international nuclear proliferation] connections, and so I believe they have the capability to miniaturize the device at this point and they have the technology to potentially actually deliver what they say they have,” Gen. Curtis Scaparrotti, the commander of U.S. Forces Korea, told reporters at the Pentagon.

He said he isn’t certain Pyongyang has an operational nuclear missile because they haven’t tested it yet, but it’s prudent to assume that they do.

“I don’t think, as a commander, we can afford the luxury of believing perhaps they haven’t gotten there,” he said.

North Korea has paraded what they claim to be a road-mobile nuclear missile, referred to as the KN-08, and declared that it is functional.

Last year, it was revealed that the Defense Intelligence Agency believed with “moderate confidence” that Pyongyang had the ability to miniaturize warheads and mount them on long-range missiles.

On Friday, Scaparrotti suggested that the North is now able to put all the pieces together.

“I think they have a launcher that will carry it at this point,” he said.

Still, the commander cast doubt on how well it would perform if the North Koreans actually tried to use it.

“We’ve not seen it tested at this point,” he noted. “For something that’s that complex, without it being tested, the probability of it being effective is pretty darn low.”